VC back in the spotlight with UI5 Runtime (VC5)

From my experience some Developers have a love hate relationship with Visual Composer.

The Designer who likes to model quickly and see instant results for their work, is often trumped by the deep

Java / ABAP Developer who wants to modify and bespoke certain parts of the application. This battle has raged for years but new developments within Visual Composer might just help to bring the two closer together. 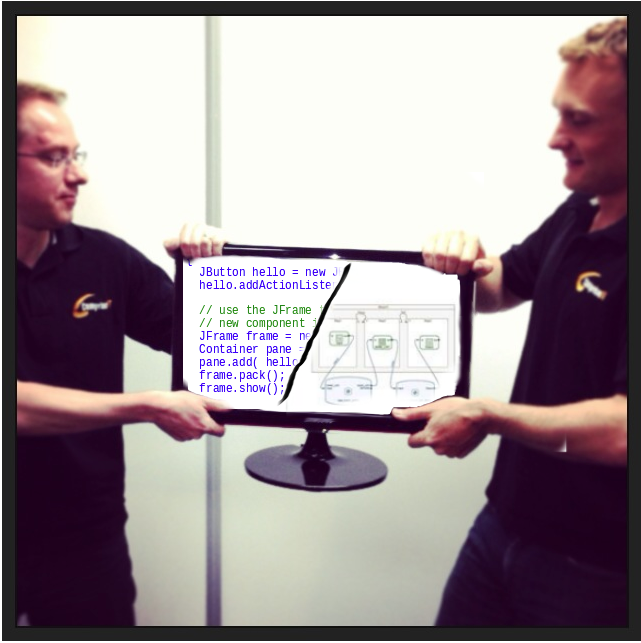 During the past few years I have come to appreciate that VC most definitely has its place in the kitbag of a Netweaver Developer. From immediate administration type UI’s to more complex approval screens within BPM, if the design is solid and VC can be used, it makes sense to use it.

In the earlier life of VC 7.1 when stability was a concern, you could be excused for shying away from it, but now following over 10 years of development, it has a solid foundation to base continued adoption of the tool.

Last month, CompriseIT were chosen by SAP to complete a mid development feedback session on the exciting VC5 project. Gad and Kobi from the VC5 team flew over to the UK and after an initial day of explaining how and why they chose to develop VC5, I was given the opportunity to develop our first VC5 application.

Immediately I was able to appreciate that the tool wasn’t re designed but that the VC5 element was a neat runtime add-on. The result is that any models pre- developed within VC could potentially be re deployed within seconds to run in UI5!   This approach makes the investment in VC a worthwhile one.

The next BIG PLUS for VC5 is that there are wheels in motion to allow all generated code (including CSS) to be editable once the generation and build  is complete (VC5 Library API will only be available when the API’s are ready for extensibility). This means the common user requests for minor changes, custom styles, actions and transitions to a button or an element will now be possible.

Don’t quite like the square edges on the tab bar….. NO PROBLEM let’s round them off and make them orange.

So to the hands on development! Within 2-3 hours of development we had imported 4 BAPIs and had a VC5 application running on an SAP iPad querying ERP for users, allowing us to lock, unlock and edit address details. 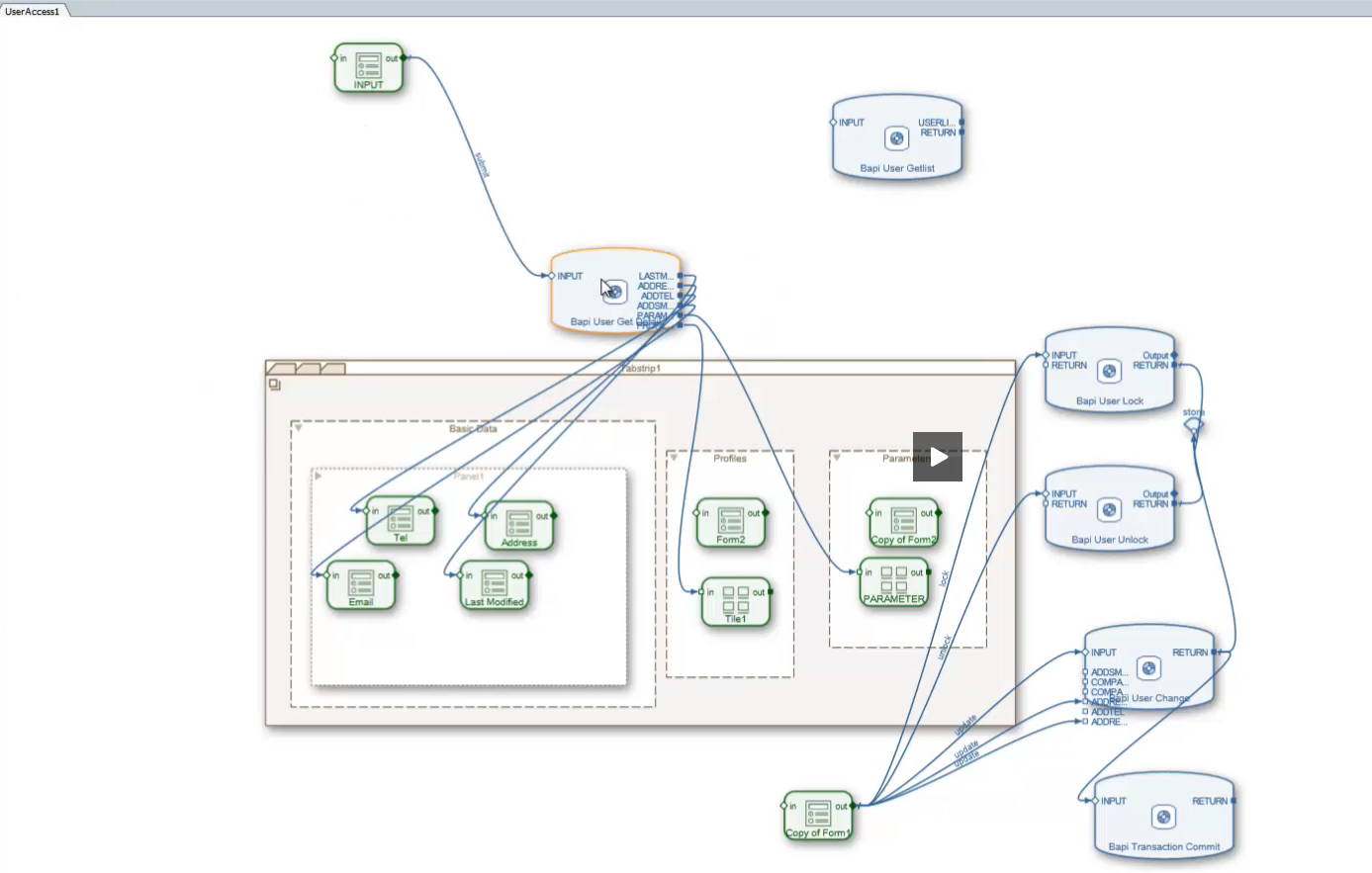 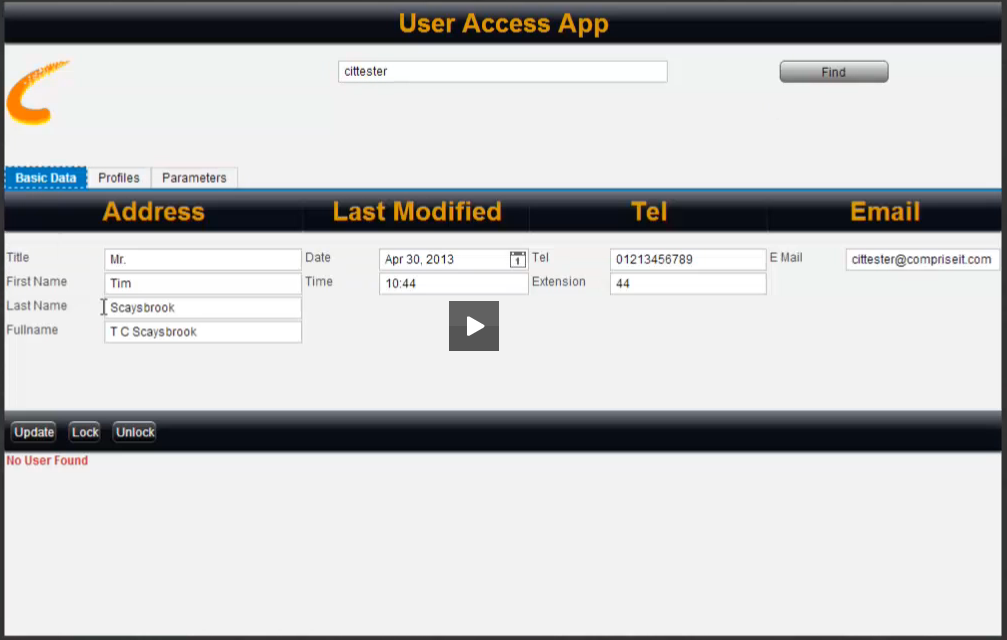 See a VIDEO of the Application – http://www.youtube.com/watch?v=3FJq036VTEI (Mastered by Owen Pettiford. I think he dreams of a side career in Video Editing)

The look and feel is exactly what you would expect from a Tablet application. Header and footer bars have controlling actions with content split within the main screen to show user details. Once we had completed the initial design, we made a change to the application so that it would allow a list of users a click through to the detail.

This wouldn’t have been possible in the current VC.  However, SAP have created a new element, the TILE VIEW! This allows you to build a form and the data that sits within it, but have it repeat horizontally based on its feed from a data source. Let’s hope this tool will also be made available in the previous runtimes!

The big question will be where this all fits within the new selection of tools available to develop UI5?

Will we continue to hand crack the code through eclipse with the UI5 Plug-in?

Will we launch head first into the App Designer (not yet available), or will we just develop in the cloud?

We hope VC5 will be with us before the end of the year (but as of yet there are no confirmed dates), so get your modelling resource ready to generate some VC5!

If this was a topic the made your mind spin even before the introduction of VC5, then view Owen Pettiford ‘s blog about UI selection – http://scn.sap.com/community/sap-mentors/blog/2012/11/07/need-a-new-user-interface-ui-or-user-experience-ux-instead-of-sapgui-read-on-to-find-out-what-you-need-to-use-part-1

I hope you enjoyed this, I would welcome any comments or feedback.

Will there be an early involvment of customers like a Ramp-Up?

At this point we can't be sure, but I will update this blog as soon as I have more information from the VC5 Team.

This is pretty cool - I've been waiting for this stuff. I got to use VC with BPM last year and was actually reasonably impressed with what was possible.  To have it in UI5 will be a big improvement!

So it means VC is still in PAM of SAP? And also in the Roadmap for 7.4 and further?

Thanks for your feedback

It was never gone from the PAM 🙂 .

could you send some links of Roadmaps and PAMS and Maintenance Strategies?

inside it you will be able to find information about VC.

When will the UI5 runtime be available with the BI//BW connector?

We need this as soon as possible.

BI enablement in VC5 is in our backlog, yet, it will take us
some time to get to it.

I will be happy to understand the scenario that you are
targeting.

If you would be interested to have a meeting, please let me
know, my email is kobi.sasson@sap.com.