Type, text, words, on paper or screen. We’re surrounded by them every moment these days. And we read them, we seek information or entertainment or commerce, generally. And we understand the text. It is composed of words strung together to convey meaning. On the one hand, it’s pretty magical, but equally it’s just common, it’s what we do every day. Type is mostly discursive and relatively linear in most of our discourse. Also common is the way we modify type to add emphasis. We provide alternate letterforms as short cuts to using more words. We use ALL CAPITALS in emails and texts although it is considered a breach of etiquette because that has come to connote shouting. Bold, of course, sets a word off as more important than the rest, often a title or categorical heading. Italic type is used for a more subtle, perhaps introspective emphasis.

But sometimes typographers use type in an entirely different way. Type can not only form the words we are used to reading, but can create images and narratives when it steps out of its discursive guise. This is not a particularly modern phenomenon, it actually predates type. Illuminated manuscripts, such as the Book of Kells is full of letterforms as image.

Here are two recent examples that caught my eye.

The first is a book cover by Cyrus Highsmith, who coincidentally designed Benton Sans, the corporate typeface used by SAP. Titled Inside Paragraphs: Typographic Fundamentals, it indeed looks inside a paragraph and dissects it to see how type works and how we read; a typographic primer to train students to think like a typographer. The cover is black. There is an image in the center. It is a white shape that reminds one of a puzzle shape, kind of, but not really. It looks a little like a cross or an x, but then again, not really. And then, there are these two red shapes flanking that white form. Again, what is it? It’s relatively symmetrical, but that doesn’t seem to help us make sense of it. It certainly is bold, it might just be an abstract meaningless form, it might be a decorative flourish.

Remember, the title is Inside Paragraphs. Here we are looking inside a paragraph, highly magnified. We are looking at the space between two letterforms; a lower case e and an a. We are looking at the negative space which results when these two letters are brought together. It’s something that exists between any two, or more letterforms, we just usually don’t see it, but it’s something typographers are conscious of all the time. It’s one of the things they see when they look inside a paragraph. It’s a factor that can be controlled to add interest, create emphasis or increase readability. At first, it looks hand-drawn, but when you look very closely at printed type, you’ll notice all the imperfections of the printing process and the ability of paper to absorb ink that we never see at our usual reading distance.I suppose the author could have just put a photograph of a magnifying glass over some type on the cover. That would have been an obvious impulse, just not very rich or interesting. Here the letterforms themselves tell a story about letterforms and it brings to sight something most people aren’t used to seeing or thinking about.

So here is a non-discursive use of type. It is type that acts more like an image, almost like a painting. We don’t read it like a normal word, yet it communicates meaning to us in a way words do not.

Another recent piece of typography also presents type-as-image, but with a more narrative twist. We’re all aware of the strife in Syria recently and have seen the destruction and heard the body count. The Economist made this a title story of an issue this winter. They could have posted a photograph of a war-torn city on the cover, or provided an infographic treatment to reveal the unimaginable numbers of the dead. Instead, they told a story of the ruin of a nation in type. 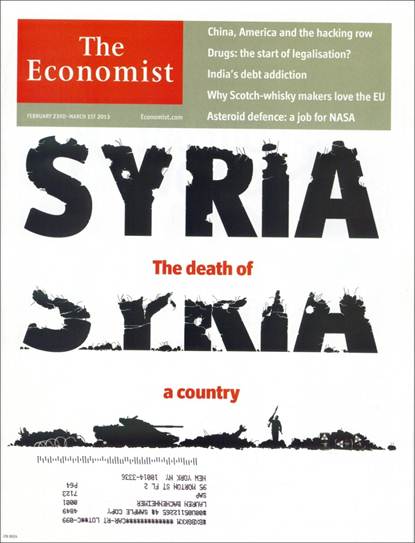 Here the destruction of Syria is depicted through the bombardment of the letterforms. The word provides the stage, the target of the attack. Beginning, middle and end, it is a short but powerful depiction of recent events. The bold sans serif font conveys the strength of solid, stable architecture. The letterforms are perforated with mortar rounds. Cracks appear; internal structural rebar is exposed. The second image shows even more destruction as the state becomes fractured and hard to recognize. The third scene transforms the letterforms into devastation. The S is now a pile of rubble with razor wire and an armed man. A tank occupies the site of the Y. An unexploded bomb reminds one of the leading leg of the letter R. The I is still somewhat recognizable,
it is a rebel holding aloft a rocket propelled grenade launcher, standing tall. And the letter A hints at the use of chemical weapons.

It is almost impossible to imagine a photograph could tell the same story.

The tension between the Inside Paragraphs cover and the cover of the Economist is fascinating in terms of what they say about text as image. The Cyrus Highsmith book cover is a near abstract image at first glance, yet depicts something physical and real. It is about formal relationships within the typographic craft. It speaks of elegance and simplicity. The Syria type exercise is brutally rooted in real world politics and violence. These two examples together span an incredibly wide spectrum of typographic expression and are almost polar opposites. What’s more curious is a quality that both share. The cover of Inside Paragraphs is all about negative space, focusing on the void between letterforms. The cover of the Economist is also all about negative space, the void that results from destruction.