Last September I published my blog introducing Gateway Service Builder which simplifies the development and generation of OData services on top of the SAP NetWeaver ABAP stack and SAP Business Suite. At that time we knew already that having strong developer support for SAP NetWeaver Gateway on on-premise ABAP systems is important but not sufficient. We will also need to do more to cater for OData service development on upcoming platforms like SAP HANA Cloud and Gateway as a Service. Customers will run on-premise systems in hybrid landscapes together with on-demand systems, consuming data from both. Therefore we will need a set of tools that span across different platforms and provide an easy and efficient development experience around OData. This is why we decided to build Gateway Productivity Accelerator as the next major building block for the development of user-centric applications on SAP.

We have now completed and published Gateway Productivity Accelerator (Developer Edition) (GWPA). GWPA is a set of developer tools in Eclipse which greatly improves the productivity of developers around the consumption and the provisioning of OData: 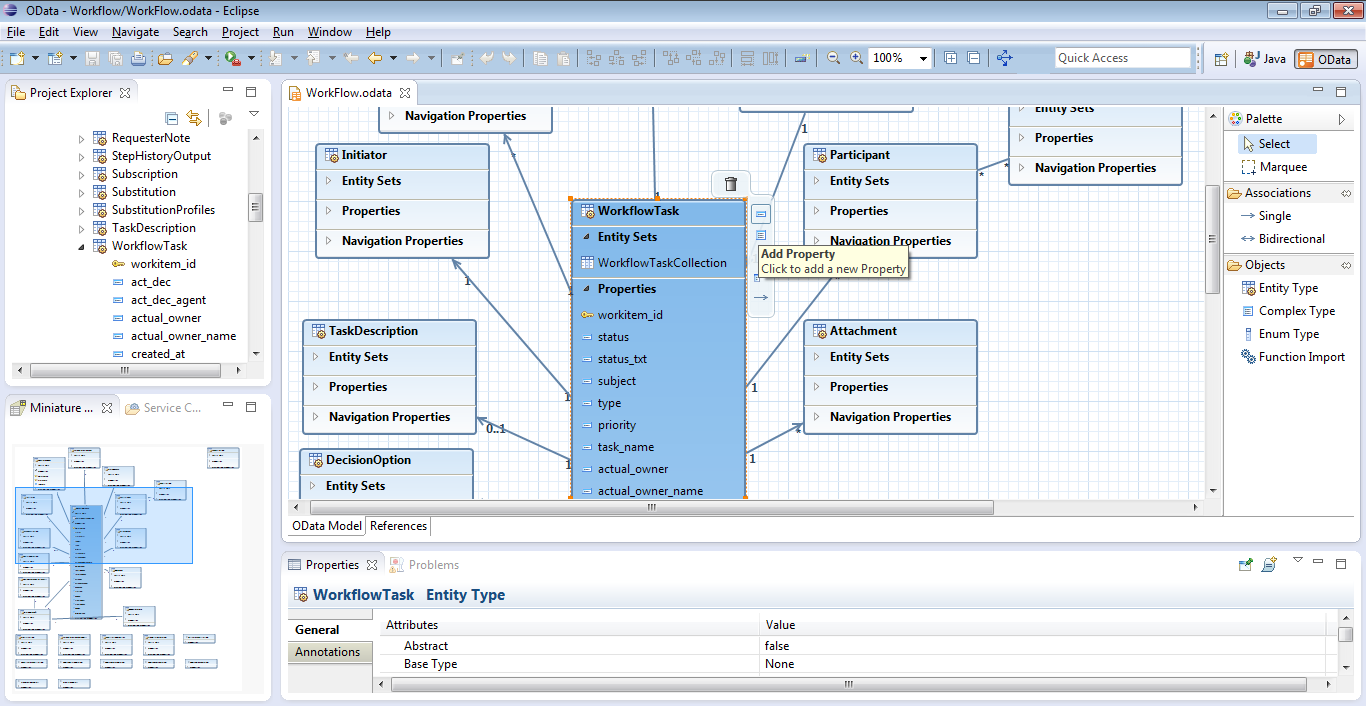 We believe, that GWPA is a significant shipment also beyond its functional capabilities. Let me explain why.

First (and only) OData Modeler in Eclipse

So far the only (setting the Gateway Service Builder on SAP NetWeaver ABAP aside) relevant OData Modeler was part of Microsoft Visual Studio. Non-Microsoft developers were restricted to modeling their OData data models in a plain XML editor. Now any Eclipse developer can freely download and use GWPA to define the OData data model that he needs.

At SAP we now have more than one platform and are serving more and more client technologies. When OData is the agreed standard protocol for user-centric consumption, GWPA can become a commonly used developer tool to model and consume OData services on the most common clients on top of any SAP platform. This will simplify the development process and reduce the TCD for SAP based development.

GWPA is designed to be re-used by other Eclipse tools

This is important if you want to generate code for either service implementations or for client-side code. GWPA uses an OData domain model built on Eclipse Modeling Framework (EMF). From there, other Eclipse tools can extract information of the data model for a number of purposes like data-binding or code generation.

To drive the overall adoption of OData and the extension of the tool into other technologies SAP has initiated the contribution of the OData modeler under the Project Eclipse “Ogee“. There the Eclipse community can extend the tool in many ways together with the committers from SAP.

GWPA shipped jointly with other key Eclipse tools from SAP

At the same time as GWPA, we published several other SAP development tools for Eclipse for ABAP, HANA Cloud and SAPUI5 on the same public update site. Now anybody can download SAP developer tools for Eclipse from one public location and install them in one instance of the two most recent Eclipse releases. And last, but not least, the NetWeaver 2013 End-2-End Developer Scenarios were published on SCN with both GWPA and Gateway Service Builder taking important roles in there. Both publications are important steps towards a more harmonized developer experience for SAP customers and partners.

So, I hope you are curious by now and will try out our new Gateway Productivity Accelerator (Developer Edition). GWPA can be downloaded as a trial-edition from SAP’s public Eclipse update site on SAP HANA Cloud. Let us know, what you think of it.

Nice blog. I m curious what the "catering" i for the use of Gateway as a Service? I think this is because in Gateway as a service one of the main ways to develop a Gateway service will be via the upload of a EDMX file, which is modelled with the GWPA?

Are there are other accelerators that I am missing?

you are asking a very justified question. GWPA now is a version 1.0. But already now you can use it in an end-2-end way:

Obviously this approach could theoretically be extended to GWaaS and the different options coming with that. I hope this answer is good enough for now.

This looks like a great tool, looking at the documentation at the moment this is only a plug-in for Juno?  Will this be made available to the Eclipse Kepler build anytime soon?

we are currently working on a new version of the tool, which also will support Kepler and subsequent Eclipse version. I cannot give you a date right now and therefore please continue to use the June version. Please excuse the delay.

any news regarding GWPA and Kepler?

As the name of Eclipse update URL implies, you need Eclipse Juno for this.

HANA Studio R51 also should be installed on Juno, not on Indigo, and we tested the installation of GWPA together with it. Can you please send me the issue, that you are experiencing (perhaps directly to me)?

I am getting error while installing the Toolkit for Android(GWA)

Missing requirement: Framework Exploration Tree 1.0.1 (com.sap.odata.dt.framework.exploration.tree 1.0.1) requires 'bundle org.eclipse.core.runtime 3.8.0' but it could not be found

Check where i did the mistake

Thanks for the Reply. Now i am using Eclipse JUNO, earlier Eclipse Indigo. JUNO have no issues. 😛

I am getting the following error. I installed Graphiti latest even I am getting same error.

In older version of HANA weekstone it worked.

I am trying in latest.

I appreciate your support in this regard.

I'm trying to create an application based on SAP Workflow. I was using tutorial from the link below.

Everything was going smooth till I uploaded my app to emulator. when i try to logon logcat in eclipse returns the following error:

Both libraries are included in the project. Do you have any idea what could I do wrong?