At the recent Sapphire conference in Orlando, one of the announcements concerned the release of AWS-hosted HANA One Premium which includes Enterprise Support from SAP and annual subscription pricing.

As I was reading the associated material about this new offering, I was surprised to read the following the statement:

A bit taken back, I started reading the documentation for HANA One Premium to find more details about the use of HANA Cloud Integration (HCI) in this new offering.

The FAQ of the offering provides initial indications of what is being used:

1. How do I load data to my SAP HANA One instance Premium?

SAP HANA One Premium is preconfigured with the Data Services component of HANA Cloud Integration (HCI), an ETL tool to load data from SAP Business Suite on-premise, and other data sources.

The Getting Started document contains screenshots of the integration between the HCI and HANA One Premium as well as a detailed description of the steps necessary to get everything working (including the installation of the OnPremise HCI agent).

An overview picture of the HCI architecture shows the important role of the Data Services Agent in the broader HCI environment. 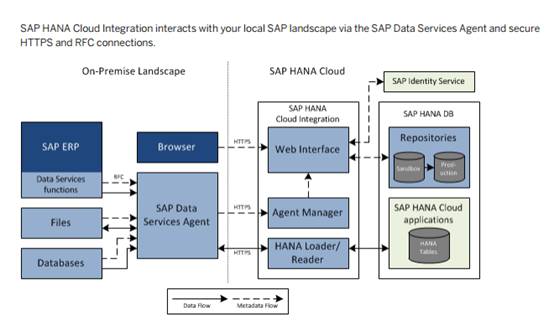 My assumption is that a great deal of the HCI architecture must be productive (especially the components present in the HANA Cloud Platform) in order to be included in the already available HANA One Premium offering.  Yet, I have found no indication of HCI’s changed product status. Considering the central role of HCI in SAP’s cloud strategy, I would have expected press releases and announcements during the recent Sapphire keynotes.

I was curious if I could find other indications of HCI’s usage in other offerings and discovered that SAP Sales and Operations Planning is also using HCI.

There are also more detailed descriptions of the S&OP HCI integration:

For me, HCI is critical in SAP’s cloud strategy.  Yet, it appears that HCI will initially only be offered as an extension of existing cloud offerings rather than a separate offering. HCI is usually in the background in such packages – other functionality (usually, HANA-related) in such offerings is usually given more attention.

I’d be interested to hear what happens when a customer uses HCI for two separate cloud offerings (for example, HANA One Premium and S&OP).

In particular, I’d be curious to see how such a scenario relates to HCI’s tenancy concept:

SAP HANA Cloud Integration is designed so that the involved virtual machines are strictly separated from each other with regard to the related participants. In other words, separate resources (memory, CPU, and file system) of the cloud-based integration platform are allocated to each participant – although all participants might share the same hardware. In addition, each tenant uses a separate database schema, which guarantees that the data of the different participants is strictly separated. This separation is also referred to as tenant isolation. The following figure illustrates this concept for two participants communicating with each other using SAP HANA Cloud Integration.

Here is my interpretation of some possibilities for a customer using HCI for multiple SAP cloud offerings:

The selected solution has major repercussions and would give an indication of the broader multi-tenancy strategy for the HANA Cloud Platform.

Why the provocative title?

In the title of this blog, I was being provocative when I added “(or cared)”.   I sense that HCI is perceived internally at SAP as less important than it might have been in the past.  Previously, SAP’s cloud offerings were primarily seen as an extension of OnPremise offerings / functionality – the Cloud was complementary to the more important OnPremise environment.  In such hybrid scenarios, HCI played a critical role – this is also seen in the important role of the OnPremise agent in its architecture.  With new cloud offerings, such as the HANA Enterprise Cloud, however, we are increasingly seeing a “cloud-first” approach where even more critical functionality is being shifted to the Cloud.  In such situations, there is still the necessity of having integrations and HCI as well – yet, I have the feeling that attention in the broader ecosystem is focused on other topics that are viewed as more important.