This tool is a Local program, available as a SAPLINK nugget. There is no need to transport it to any other environment than Development. Installation is simple. Import the nugget with SAPLink and activate the Report, Report Texts and the Menu (CUAD). That’s it.

The program checks transports on Object level. A variety of validations is performed to check if it is safe to move transports from the test environment to the next environment (most likely production).

It does not make changes to the database, but runs as a straightforward report. The only thing the program can create, is transport documentation, but only if the user decides to do so. What the program aims to do is to highlight possible risks, allowing the user to add or remove transports and eventually produce a list of transport requests that can be moved to production with minimal or no conflicts.

Did you ever get the request to ‘quickly check the transport list’ two days before Go-Live?
Only to discover that the list has hundreds of transports with thousands of objects?

So how do you check the list? You know that there is no way that this list of transports can go to production without issues. Cleaning up the mess is impossible, takes too long or is too costly.

There will be issues, but which? How serious will they be?

The next question you’ll get is ‘What is the risk?’. Do you dare to answer ‘The system could go KABOOOM’?

Yes, most issues can be prevented if the responsible user is careful when creating transports and organizes them properly before releasing them. However, nobody’s perfect. Mistakes will be made and corners will be cut. When the pressure from above increases, strict rules suddenly become flexible.

In the past I ran into this problem. I had to check a list of transports for a project that lasted over a year. Multiple developers worked on it and each delivered a list of transports. This I had to check… I encountered so many problems that I decided to write a small program that would check for older and newer transports of all objects used and then give warnings. The program was far from perfect, but it did the trick. The project from hell went live with only minor issues. That was several years ago. Since that time the program has grown. More checks and functions were implemented.

I do not have the illusion that it is perfect. I tried to make it as flexible as possible, but there is always room for improvement.

But if there are people who may have use for a tool like this, they can check it out and download it from Github: Transport Checking Tool (Object level).

This tool was written to be used in SAP ERP. The Transport Checking Tool uses Data Dictionary objects that existed in the system it was developed in. Of course, which DDIC types exist can be release dependant. All the Data Dictionary objects that I have used, should be available in the system the Transport Checking Tool is imported in. If not, a programmer will have to modify the program to correct this.

Description of the Tool

Below is a short description of the tool, input, output and functionality. For more detailed information, please have a look at the User Manual on Code Exchange. 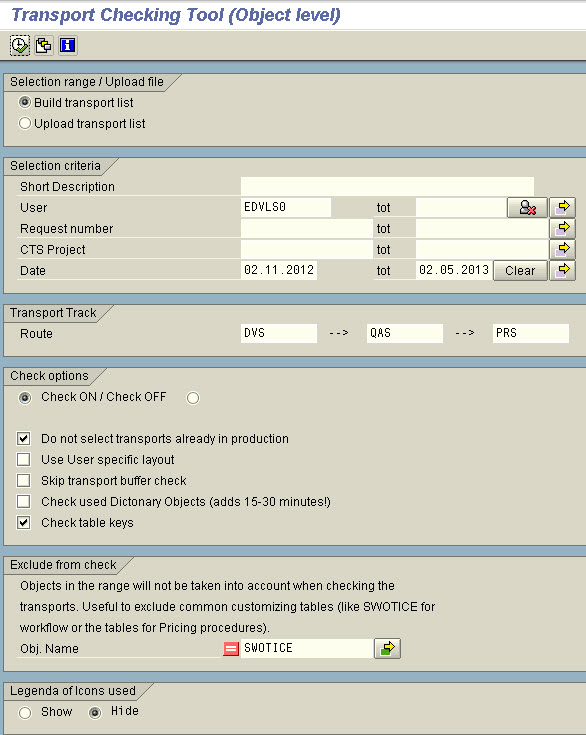 This screenshot is an example of the output. 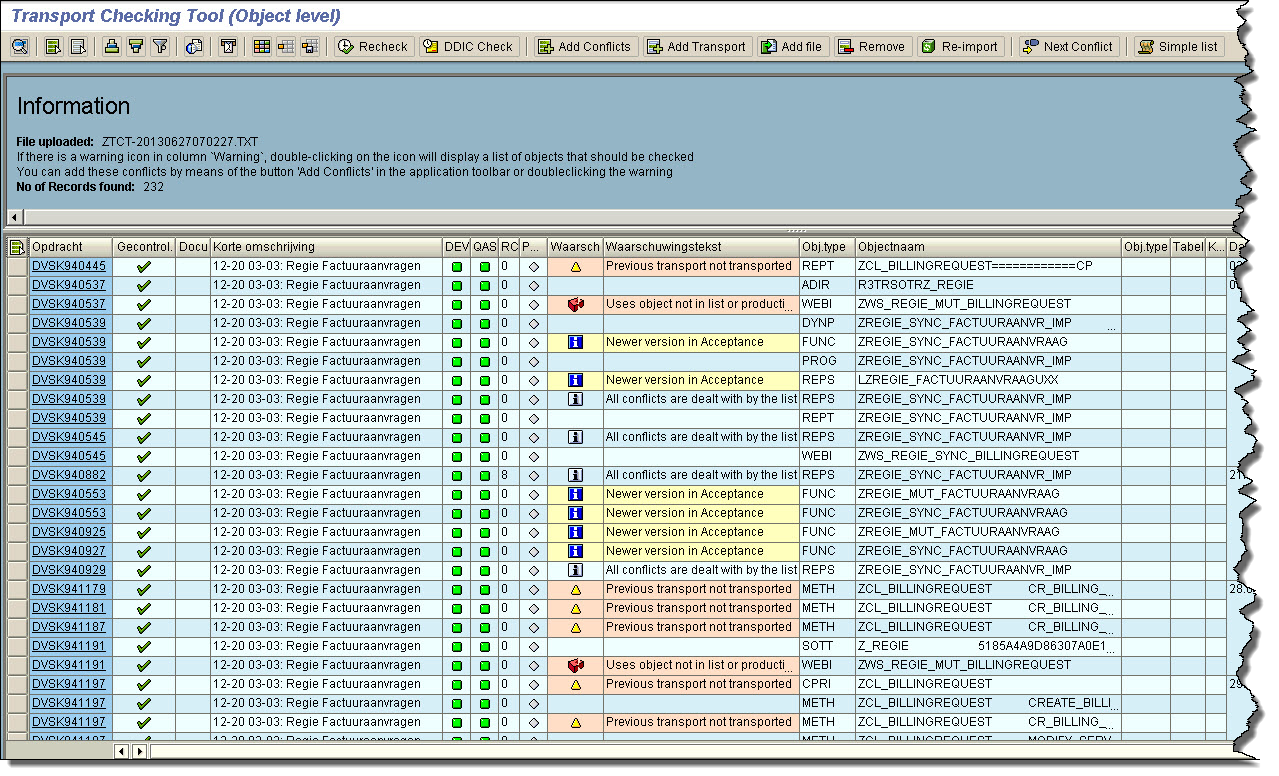 Interesting is the Application toolbar, which has buttons to:

When a warning is given, the user can click on the warning icon. Let’s have a look at the example displayed below:

There is a warning (yellow triangle, stating that there is a previous version that is not in your list. Double-clicking on the icon will display the following popup:

Here you can see which transport was missed and it also becomes clear why. Another user changed this object as well. And now it becomes interesting. There are two options:

By clicking on the Okay icon, the selected transport will be added to your list. It would be nice if at this point you contact the user first, to ask if his transport can go to production or not (for obvious reasons, I hope). The transport of the other user will most likely contain other objects too…

The golden rule here is to COMMUNICATE.

Determining the transport order is straightforward enough. The complicating factor will be other transports in acceptance, containing one or more objects that are the same as objects in your list.

The Developer or Functional consultant should always be very alert for these considerations.

As a rule, User-Exits should always be transported separately. The same rule would apply for DDIC elements that can/will be used in multiple objects.

Keeping the transport list clean and simple may prevent a lot of hair-pulling later on.

Risks when transporting to Production

When transports are moved to production, there are several possible risks. The chance, severity and impact of issues on the system will increase with the number of transports involved and the number of objects in these transports.

Frequent problems encountered when NOT using a transport checking tool are described in the next two paragraphs. 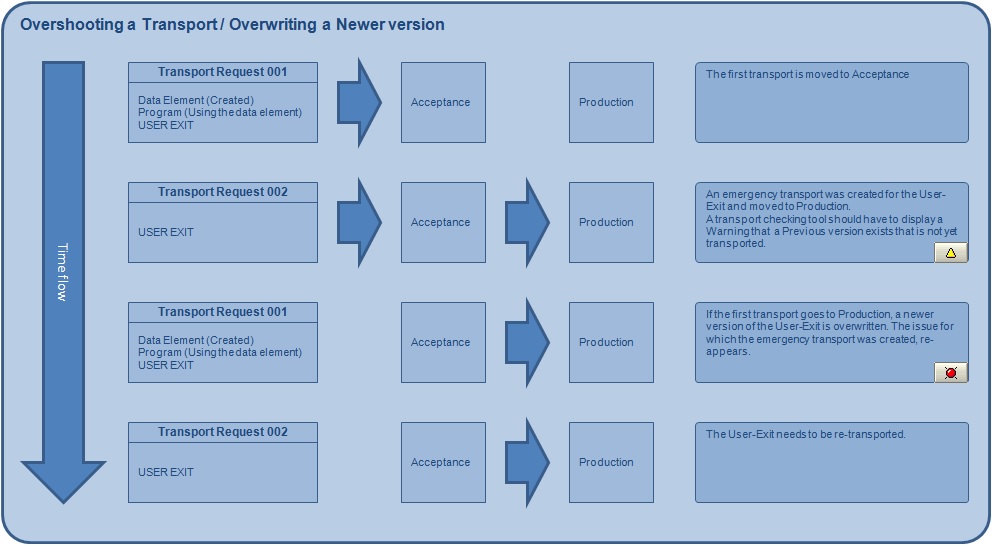 Objects go to Production with previous versions in Acceptance

Result: unwanted (or even incorrect) changes go to Production without being signed off.
Code can also contain data elements that are not yet in production. The used/required data elements might exist in Acceptance, in another transport, but not yet in Production. When developing and testing there will be no syntax error. There will be no warning at all because the data element exists in Development and Acceptance. Only after the transport to production has been done, dumps will occur.

In the end, the real trick is to be careful in the beginning. Check before releasing transports in the Development system. Organize them properly and try to think ahead. This prevents a lot of problems. But even so, it will always be necessary to check the transports that go to the Production system before actually moving them.

To do this, a transport checking tool will come in handy.

Still, keep in mind that the responsibility for the transports lies with the developers and the functional consultants who created them and who added the objects to them. They will have the best understanding of what was changed and why.