When the devastating EF-5 tornado smashed through Newcastle and Moore, Oklahoma on Monday afternoon, 20th of May, 2013, destroying everything in its path, taking 24 lives and injuring scores more, still it could have been much worse.  The National Weather Service issued the initial tornado warning a full 36 minutes before the tornado began to cross through Moore.  This type of lead-time saves lives and people in the Plains states – “Tornado Alley” – certainly pay heed to these warnings.

But how are people warned?  The national Wireless Emergency Alerts (WEA) using cell-broadcast technology is now live, but not received by a significant number of devices, including many iOS smartphones.  Additionally, both national and local media – online, mobile and broadcast play significant roles as does Twitter, various alert services from private agencies including a Red Cross app, and private weather agencies such as the WeatherBug app.  As a last resort, there are the tornado sirens. 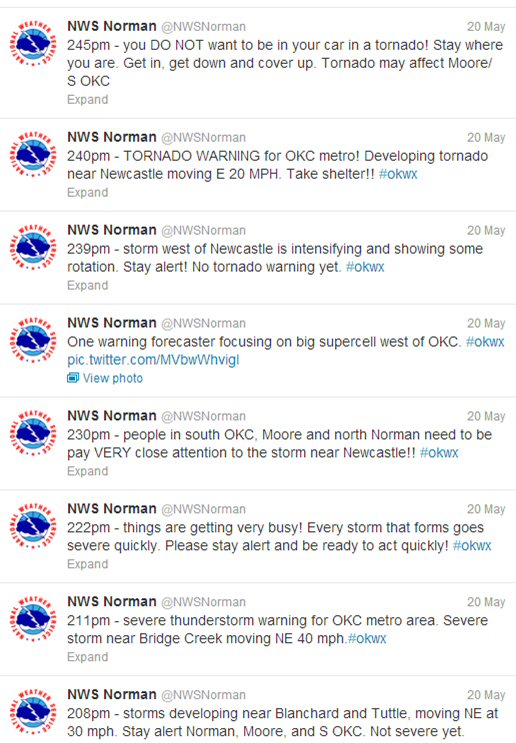 Overall, this storm was extremely well warned.  Refer to the NWS Norman (OK) Twitter feed (click on it to view in full-size).  As early as 2:08PM, forecasters watching the storm began alerting followers.   At 2:11PM, a severe thunderstorm warning was issued.  Furthermore, a forecastered commented at 2:30pm that the storm near Newcastle was worth watching closely.

Referring to SMS activity in the graphic (click on it to view in full-size), texting traffic begins to grow dramatically as the concern and warnings build.  As you can see the traffic peaks during the moments before the tornado actually reaches Moore. By the time the first tornado warning is issued (2:40PM), traffic is over 60% above normal.  At the time of the NWS Tornado Emergency, the traffic is over 100%, peaking to over 140% of normal as the storm begins to enter Moore.  These graphics clearly show that, despite how people are initially warned or made aware of a developing situation, SMS is still a preferred and quite reliable medium when it comes to getting the word out. 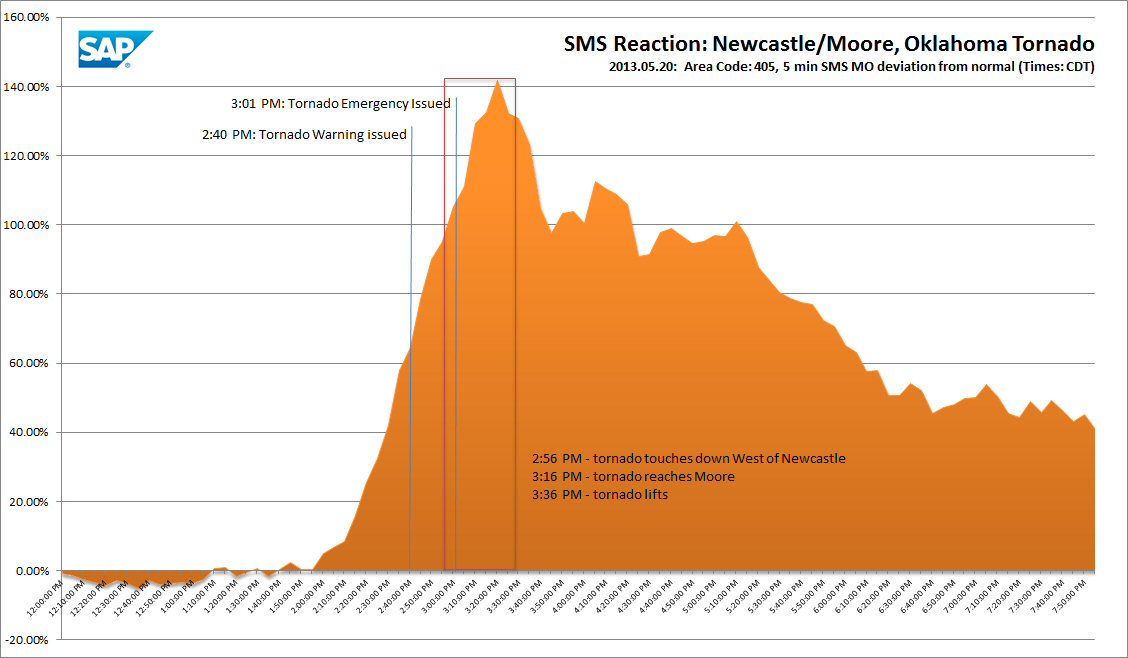 If you’ve followed my blogs over the past few years, we’ve been able to show how SMS is the primary medium for disseminating information in dire situations immediately after an event; however, in this case, our data clearly shows that messaging traffic grew substantially above normal prior to the event. Given the extreme nature of the event, Person-to-Person SMS played a key role in passing along important warnings to friends and loved ones, regardless of how the initial warning was received.   Despite all you’ve read in the media about the so-called “demise of SMS,” when it comes down to disseminating situational awareness information – especially for localized events, SMS still reaches more people than any of its competitors (e.g. WhatsApp, Kik).

Multi-media warnings play an important role in keeping us safe today.  Whether your favorite media is Twitter, one or more apps, SMS alerts, some other medium, or even WEA (via cell broadcast), mobile devices will very likely be part of your alerting plan.  I am very impressed to see that OKC metro subscribers then shared their warnings and quickly, according to the data. It may have saved some lives. SMS is just but one of several media options; however, SMS is quick, and enables people to forward the initial warning to many people.

As many have shared before, you can certainly text a $10.00 donation  (note that this won’t work with messaging services such as Kik or WhatsApp – you should do this from your mobile device using your carrier SMS) :