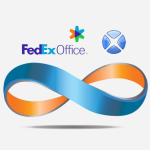 Interactive dashboards are the perfect tool to allow everyone in an organization to get exactly the information they need to do their jobs, we call this Universal BI, and a couple of weeks ago I saw a fantastic example of this in a presentation at  SAP SAPPHIRE in Orlando.

Andy Mills and Charlotte Huff discussed their SAP BusinessObjects Dashboards (aka Xcelsius) implementation and the transformational effect it had on the running of their 1,800 stores. The presentation finished on a quote from their COO Kim Dixon:

“I consider ICE a true game-changer for FedEx Office field operations. It provides great visual dashboards of key metrics. With ICE, it’s easy to spot areas of strength and weakness so you can take quick action to improve performance. This really is the next generation of reporting and managing our business”

So what is it about Universal BI in general and the ICE system at FedEx Office in particular that has this transformational effect.

The answer lies in undestanding he audrience you are dealing with. For BI to truly be universal it has to reach well beyond the small fraction of the organization who class themselves as analysts, getting information out into the hands of operational end-users. However, that presents a number of challenges ;-

In the past, the answer to 1) has been to provide end-users with tools to give them ad-hoc, self-service access to data, but this falls foul of both 2) and 3) as it requires too much work on the part of end-users to actually get results.The solution, as the FedEx’s ICE system demonstrates, lies in interactive dashboards. Because these can be designed with tailored interfaces (more like BI Applications than any other sort of BI), they allow end-users to navigate sophisticated views of the data quickly and easily in order to get what they need and get on with their jobs.Critically, because thought has been put into the interface and the information required everything can be delivered in a very focused manner with little or no training requirement for the end-users, an efficiency double whammy; everything you need, nothing you don’t, all in an easy-to-use package.This approach at FedEx had a number of key benefits :-

It is hard (actually I would say impossible) to imagine any other sort of BI making this possible. The “too much data” issue was a result of a static reporting approach and the idea of arming all of the store managers with some sort of data discovery tool is no better. In fact a data discovery solution would probably have been worse, it is unlikely that it would have been widely adopted, the up-front training would have been too high and the on-going effort of retrieving data from the system would have also been a waste, and for those who did use it, it would probably tie up even more of their time as they surfed the information in an unstructured manner.

No, a good set of well-crafted dashboard is pretty much the only solution which could have had the desired effect and the initial effort put in to the design and delivery will be paid back many, many times over in the months and years ahead.

As Andy said to me after the presentation :-

“We have 3000+ people using the tool from CEO,COO and CFO through to Assistant Managers. They love it and the ease of understanding. The main dashboard and a few of the second level dashboards are also shared with 22,000 team members on a daily basis to help them understand the state of the business. This is true Universal BI.”

To see more of the ICE system you can view a recording of Andy and Charlotte’s presentation at Sapphire here.

To read more about Universal BI and how Antivia can help make it a reality come to either www.antivia.com or http://www.antivia.com/UniversalBIVision