Thanks for the response for first two blogs.SAP SCN is a wonderful place to share thoughts

Let me Jump  directly to SAP Extended memory.It is one of the main places where user context is stored.

From the previous blog we know that SAP extended memory is a shared memory.  And it can be used to store the User context.

Since there are roll in roll outs for different sessions it is convenient to store the user context in Extended memory.

What is the Size of the SAP Extended Memory?

Ztta/roll_extension defines the maximum size of a user context in an extended memory. You know why need this kind of a limit.

Abap/heap_area_total-Total SAP Heap memory that can be allocated by all work processes.

We want to look at how memory is allocated during a transaction step.

1.When a transaction starts  ztta/roll_first is allocated which is normally kept to 1 (byte) to reduce the usage of SAP Roll memory.

2.ztta/roll_extension – The remaining part of the user context is stored in Extended Memory up to the limit of this parameter

3.If the extension limit is exceeded the remainder is stored in ztta/roll_area

4.If the Context Continue to grow the work process will go to SAP Heap memory abap/heap_area_dia or non_dia is used depending upon the type of work process .This status is called PRIV mode. 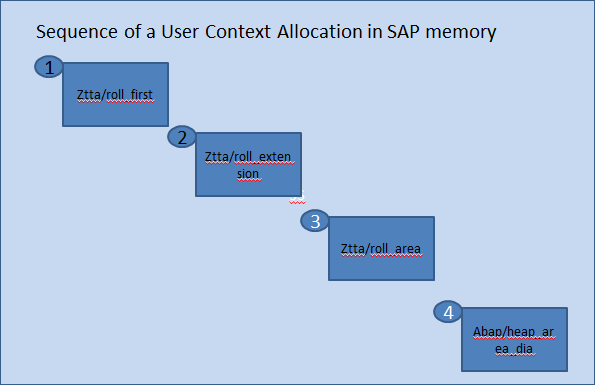 This is a general approach and will vary upon the architecture and the type of operating system. For example in Unix non

As previously noted user context are stored in extended ,roll and heap memory.

However memory areas are required to hold data globally between user contexts.

It is completely different from Operating system Paging memory

A new user context is created when an ABAP Program calls another program or transaction. The variables are transferred when a new Program is called and is stored in Paging memory. Refer to part1 we have a similar situation like below.

My intention is to introduce some basic terms which is used on  a daily basis and explain it in a simple way. Hope it was useful .you can step on basics and try to read and understand the memory management .

It will be nice to conclude this way

4.Any  Other Program running (memory Occupied)

The Virtual memory Required MUST less than Available  memory. This will be your starting point for memory tuning.

If this blog was useful and interesting please let me know.

The link to previous blogs

This is a general approach and will vary upon the architecture and the type of operating system. For example in Unix non Dialog work process uses more of heap memory than shared memory.

There are exceptions when it comes to Linux and AIX

THanks Regan for sharing...The idea was to give a basic overview and i let the readers pick from there and explore...many Thanks again for pointers...

Helpful blog series on the memory mgt. Is the above chart is applicable for dialog process ?. Since in the SAP note 941735 I could find the order is differenf for Non-dialog process

Thanks Jacob.Nice information about the basics of ABAP memory management.

Great article and memory management was explained in simple manner, thanks for sharing.

If we define a time limit from the parameter rdisp/max_priv_time will a workprocess which goes to PRIV mode will automatically terminate once above time limit exceed?.