Clarifying an error message with no description in ChaRM Mobile App

If you are using ChaRM in Solution Manager 7.1 and the latest version of the SAP IT Change Approval app for iOS to approve the Requests for Change, you may have already faced an exception such as the one below:

“There was an error sending your message: No exception text available”

I was testing the whole ChaRM process, Requests for Change and Change Documents were properly working, so we started to test the mobile app. Things were working fine, the Requests for Change were being approved and rejected correctly via the app, with or without comments. Many tests later, something went wrong. And it was random (of course it wasn’t, but that was what we first thought since we could not figure out the reason). Some times the app worked, sometimes not. We were testing in a team, so one was creating the Request for Change, another one was testing the approval and so on. Here is what we were doing:

First, when a Request for Change was created and in status “to be approved”, the change manager was able to see it in the mobile app and check its data. The Approve and Reject button were available: 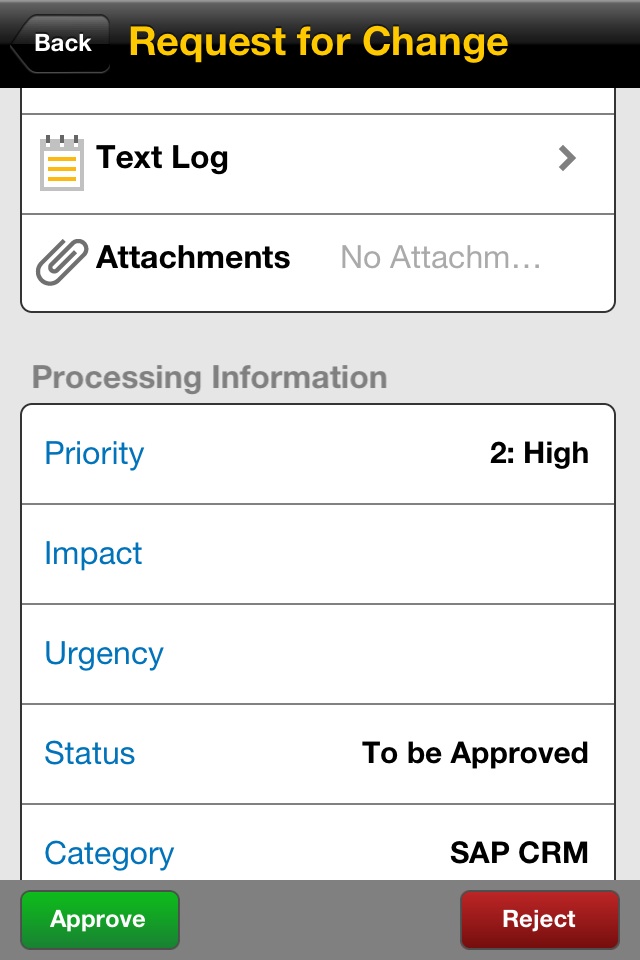 Next, the change manager tries to approve the Request for Change clicking in the Approve or Approve with Comment button: 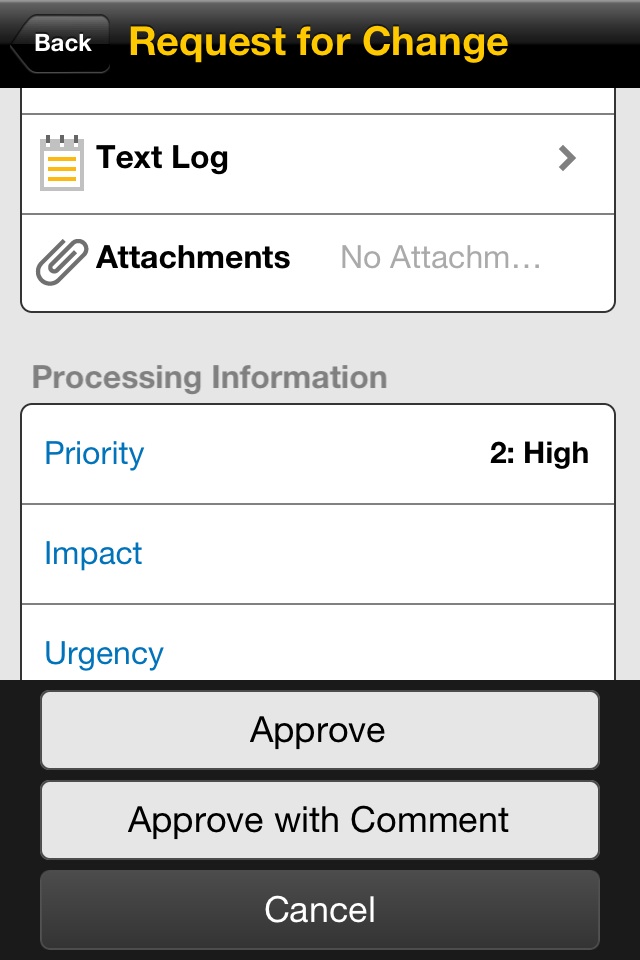 What happened next in some of the cases was this unclear message: 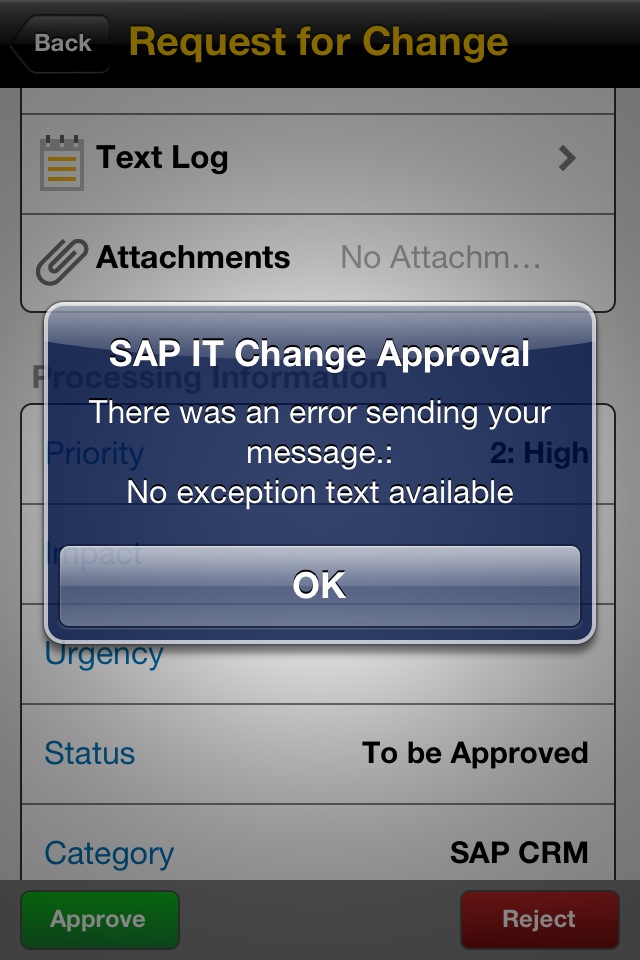 Very easy to understand, isn’t it?

We started to look for a technical reason, checking the Gateway set up and log, and authorization errors. It should not be any of these since the approval worked in most of the cases for the same set up and same users. Then something came to my mind and I asked the person who put the Request for Change in status “To be Approved”:

“Is the Request for Change in edit mode? Are you locking it?”

It seems so stupid.. but that was the reason. If the document is locked, you will not receive a clear error message explaining that. You will receive this strange and unclear error with no exception text. When the Request for Change was unlocked, the approval worked fine: 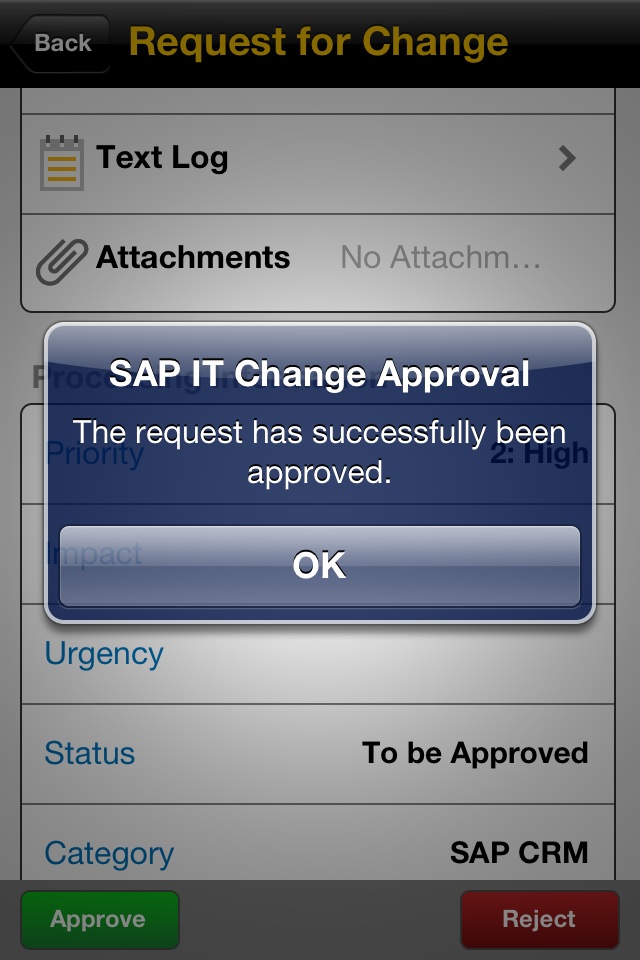 As this may happen with the users when ChaRM is live, we decided to open an OSS message to complain about the unclear error message. We know the reason now, and we can document it, but I am almost sure that when we have more change managers using the app, this error will generate unnecessary incidents. Besides that, it may happen that there are more errors being informed with the same unclear text.

The answer from SAP OSS message was that they will include this bug fix as part of the improvements of error handling of Incident Management and ChaRM mobile apps with the new major version which comes out in Q4 2013.

So, if you face this unclear error, please check if the Request for Change is locked. If it’s not, you may need to look for other reasons for this error message and/or contact SAP.

Updated on 12 Nov 2013: After some months, my OSS message was finally replied with a solution and now we have an SAP Note correcting this problem: 1921695 – GDAPI: Error messages of approval are not displayed

Very nice document - I confess I haven't gotten very far with this in our sandbox but I appreciate the heads-up and lessons learned!

Looks like SAP team responsible for this solution didn't test well this functionality.