In his blog posting a few weeks ago, my colleague Dieter Krieger announced the start of the SAP NetWeaver Landscape Virtualization Management 2.0 Ramp-Up.  In this blog I would like to highlight a few of the enhancements and new features in SAP NW LVM 2.0 for those customers who may want to consider joining the Ramp-Up.  The diagram below shows the major areas of focus for the SAP NW LVM 2.0 enhancements, however in this blog I would like to focus on three (3) of these, specifically: 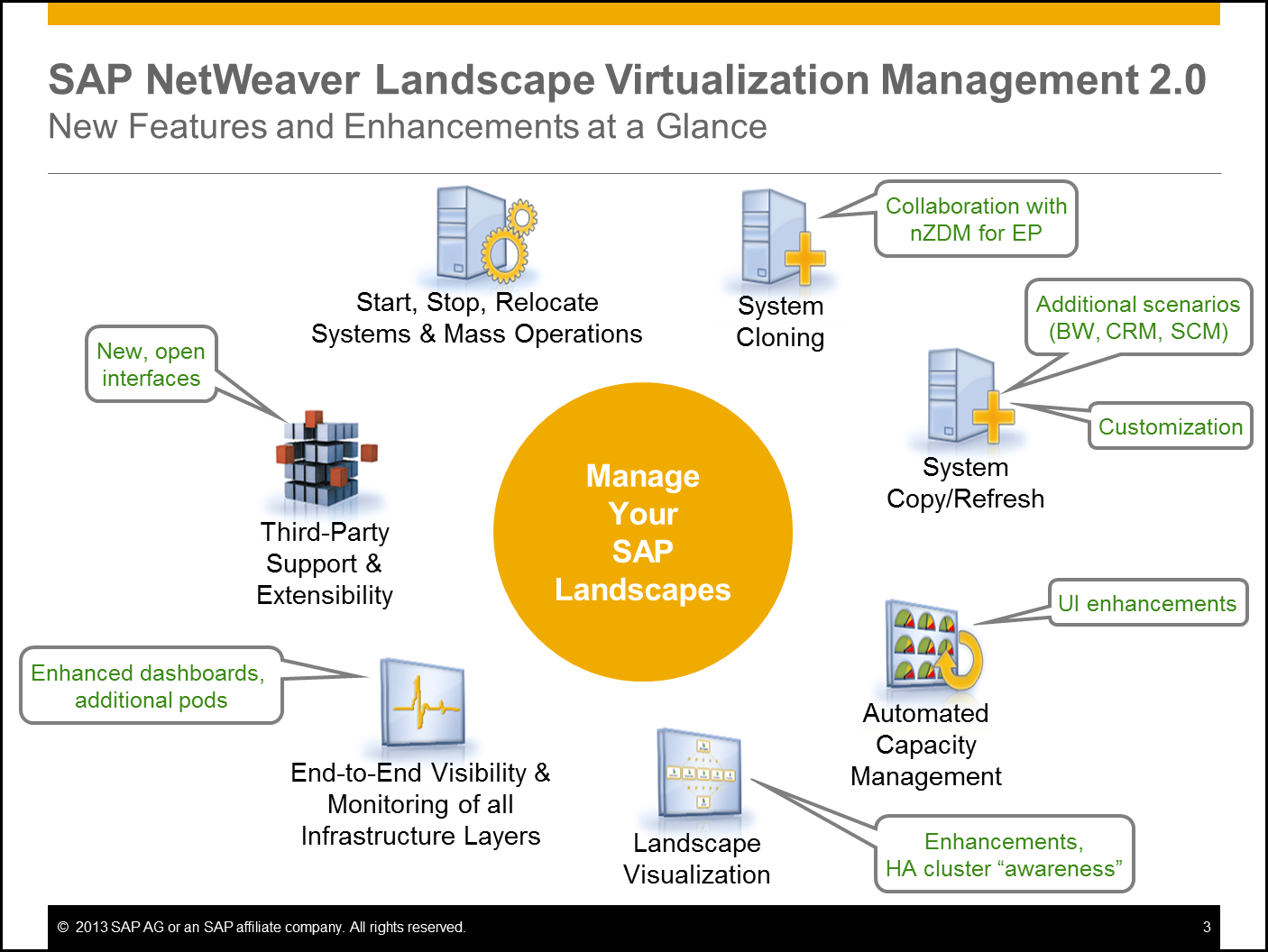 With the new global search capability, users can quickly find systems, hosts or other entities which match the defined search pattern.  For instance, if you wanted to locate a specific system, you can enter the System ID (SID) in the search box at the top of the window, and SAP NW LVM will return the exact match for that SID.  From there, you can quickly navigate to the Operations view to performance an operation (e.g. start, stop, relocate, etc.) on that system, as shown in the following example: 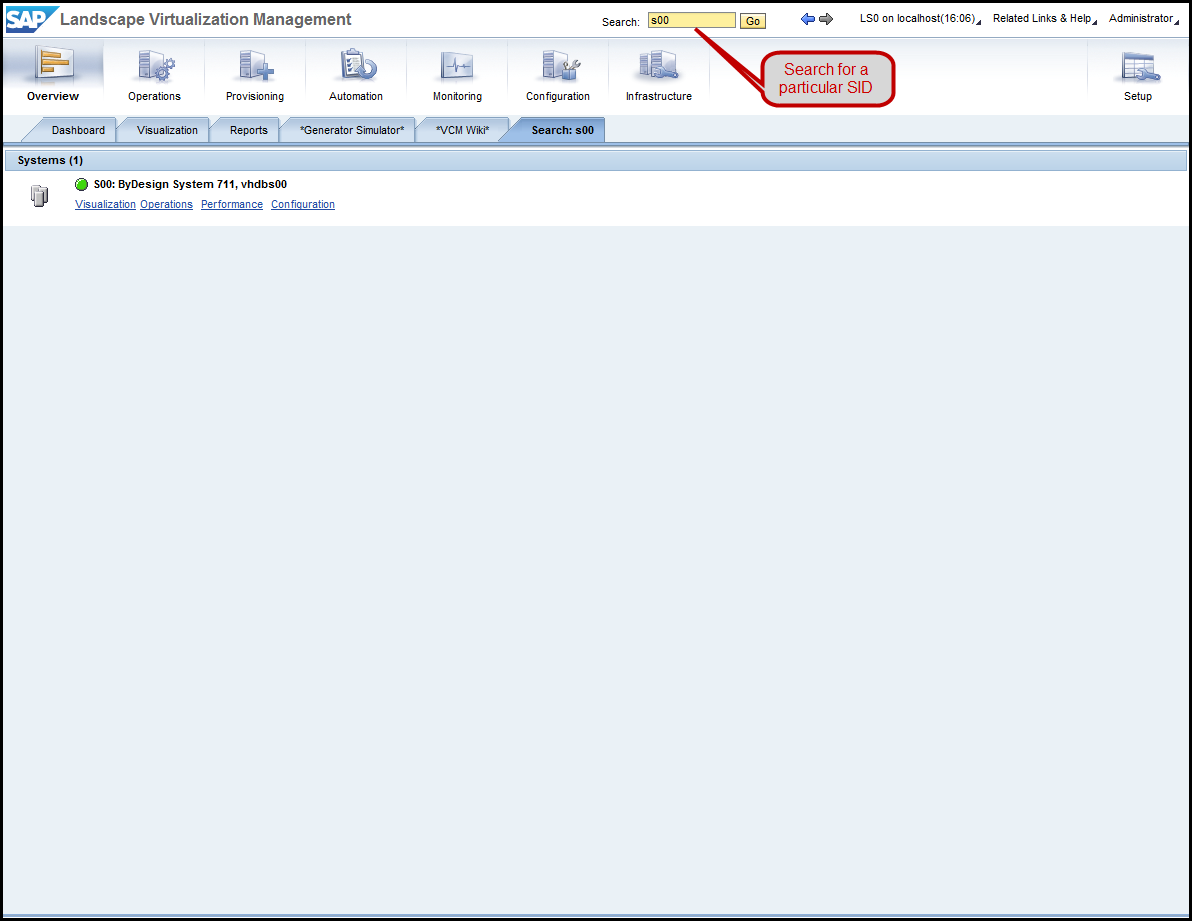 If you don’t know the exact name of the entity, you can also search for a regular expression (e.g. S0*) to look for all matches of a text string, as shown in this example: 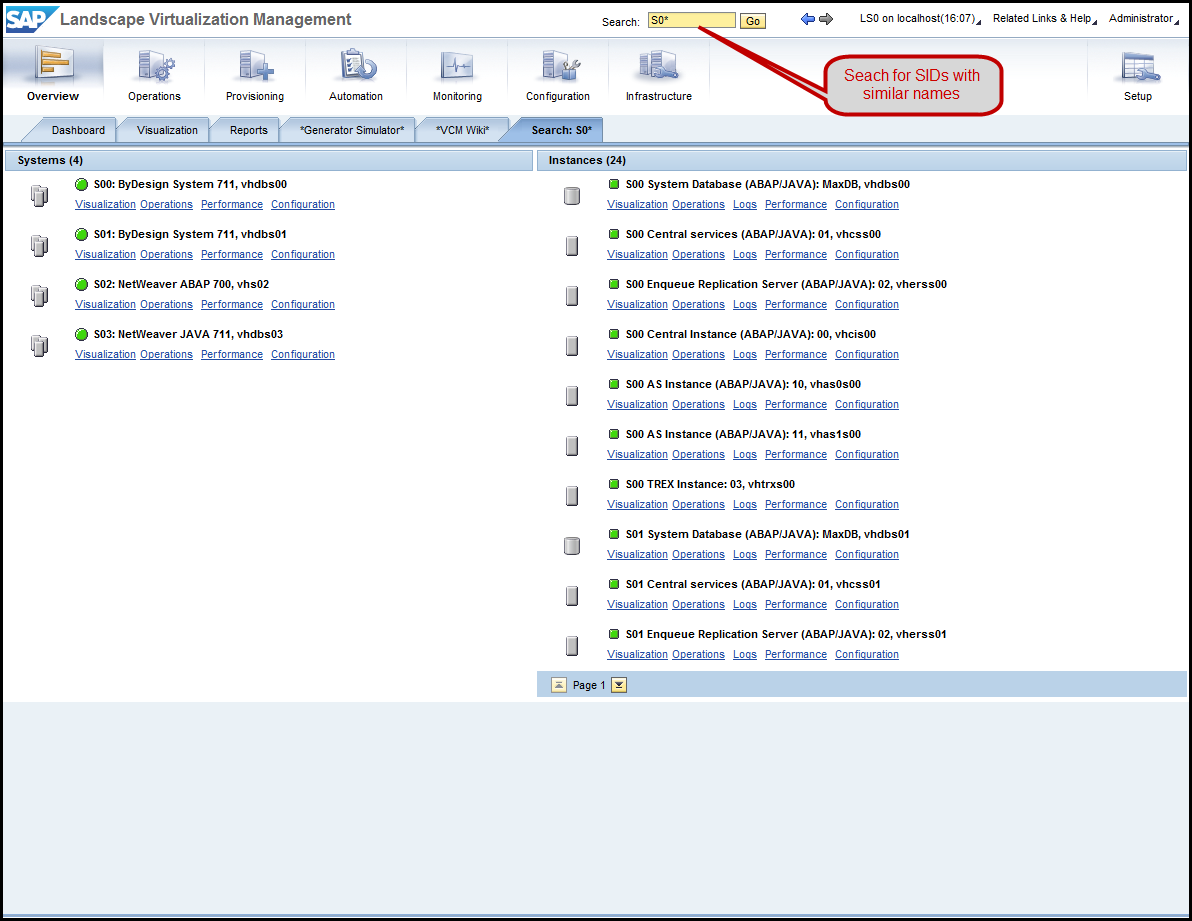 Or this example which shows a search for all objects that contain the string “maxdb”, which will effectively show all systems which are on MaxDB as the database. 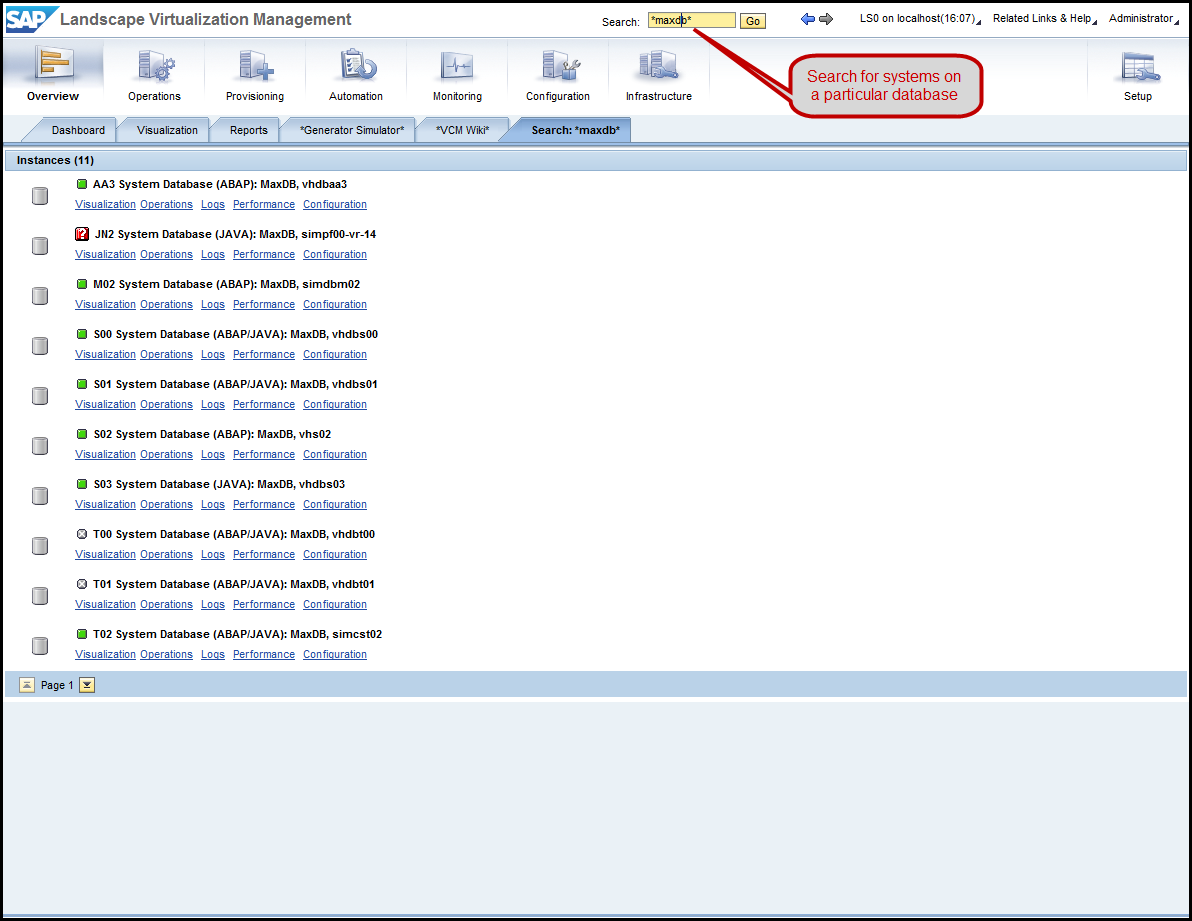 The new custom cloning feature in SAP NW LVM 2.0 enables customers to create a system clone based on their existing cloning process.  This is accomplished by creating a series of Web services or scripts which implement the existing pre-clone, clone, and post-clone steps for both source and target systems, and then mapping those to the corresponding steps of the “built-in” cloning process in SAP NW LVM.

Finally, you tell SAP NW LVM which system(s) should use this custom provisioning process by going into the Configuration view, selecting the appropriate system, Edit the system details, select “Use Custom Provisioning Process” and choose the specific custom process (assuming you have more than one) from the drop-down menu, as shown in the example below: 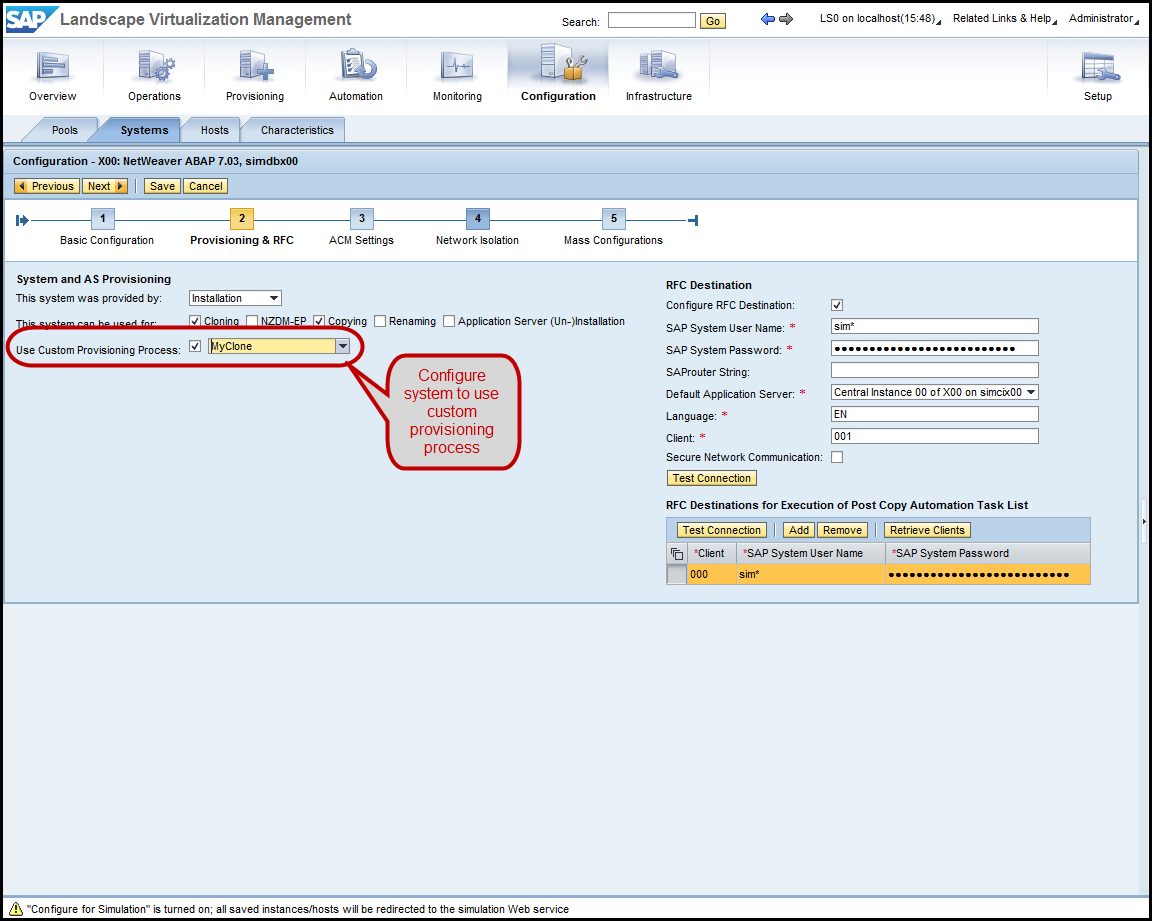 Now, when you go to perform a clone, copy or refresh operation you will see that the cloning step is replaced with the Custom Clone step in the workflow as show here: 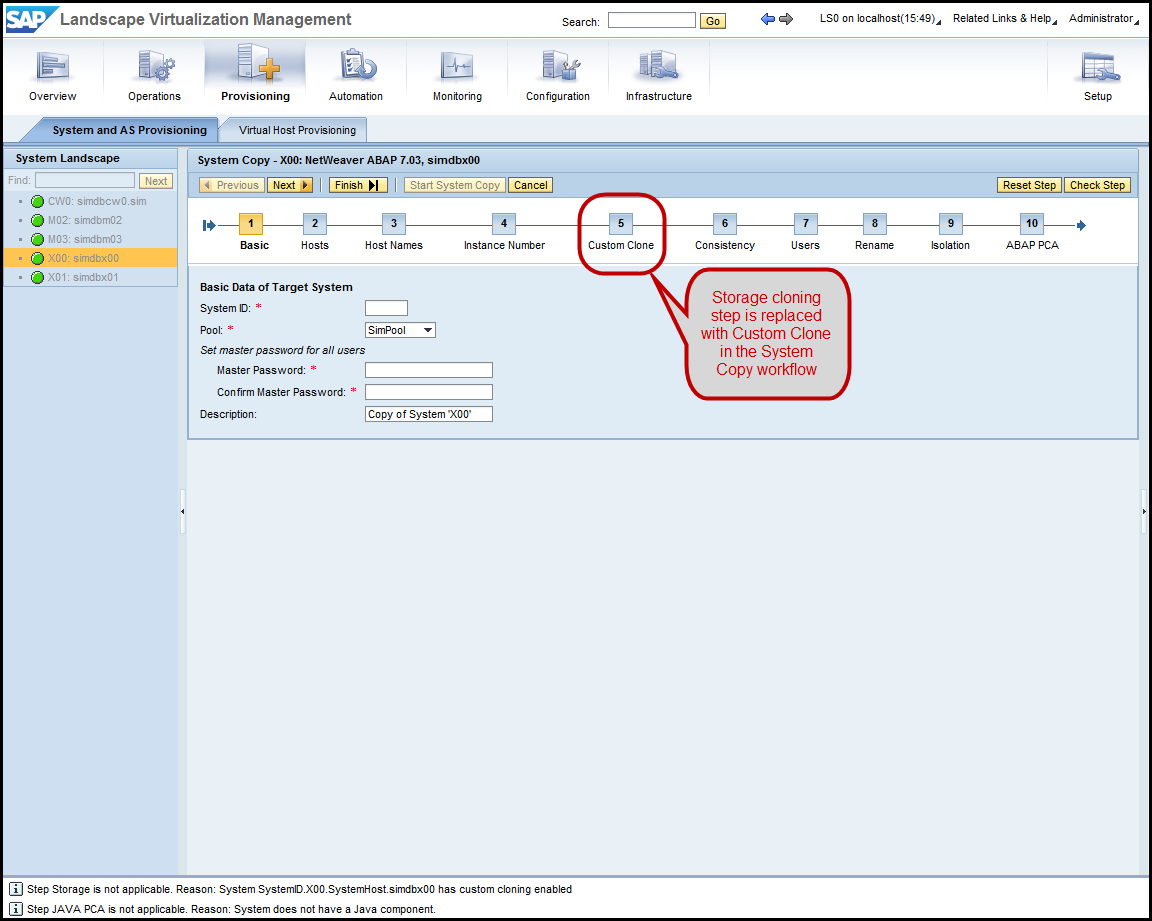 Last, but not least are some examples of the improvements which have been made to the Landscape Visualization view in SAP NW LVM 2.0.  As you can see from the following examples, this view has been significantly enhanced based on the feedback and comments we have received from several usability labs and early adopters of the product.

Here you can see that the fixed areas of the screen are replaced with vertical tabs for various object types like systems and hosts.  You can also see that the terminology has been updated to reflect the vocabulary more commonly used by Basis administrators and other users (e.g. “services” are now called “systems”, “resources” are now called “hosts”).   In this new implementation you will also see that information about the object is displayed as a pop-up when you hover over that object with the mouse cursor. 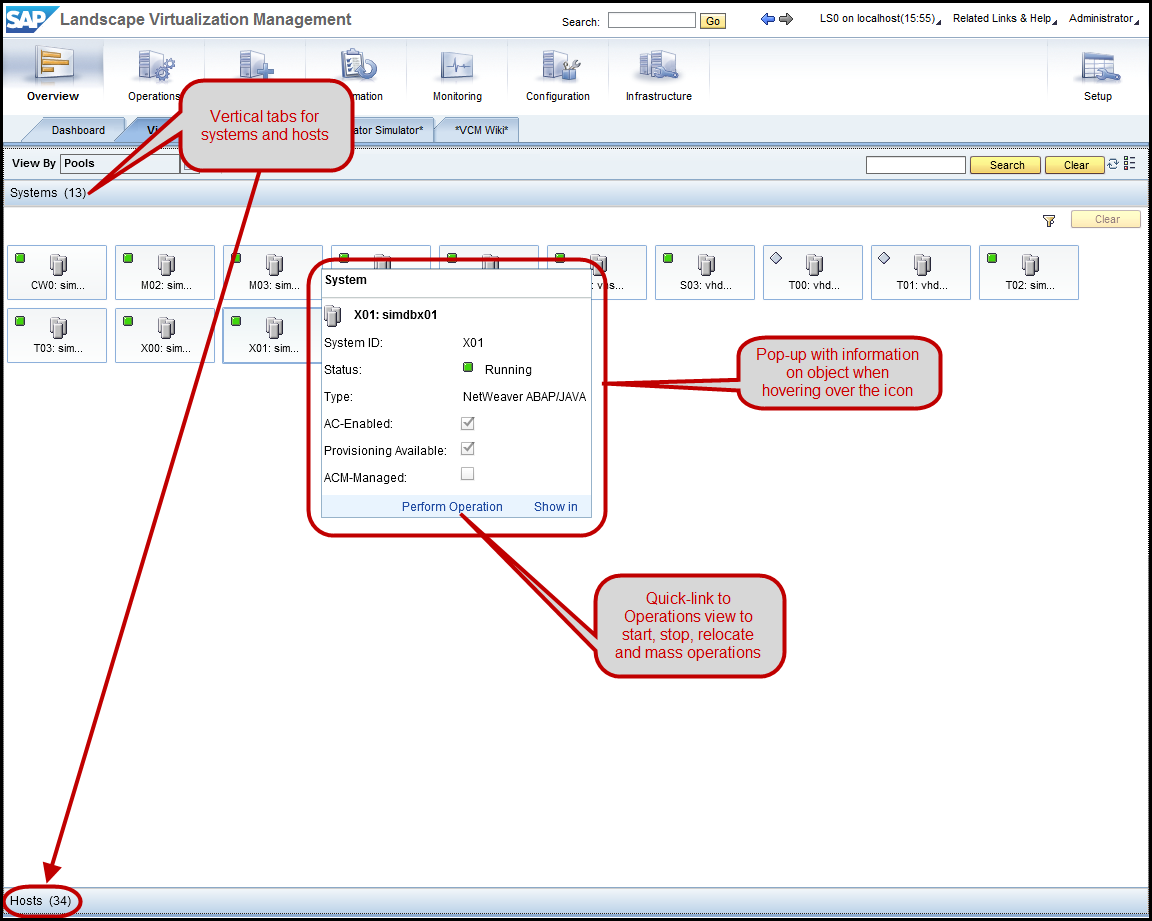 And here is a similar example showing the hosts view: 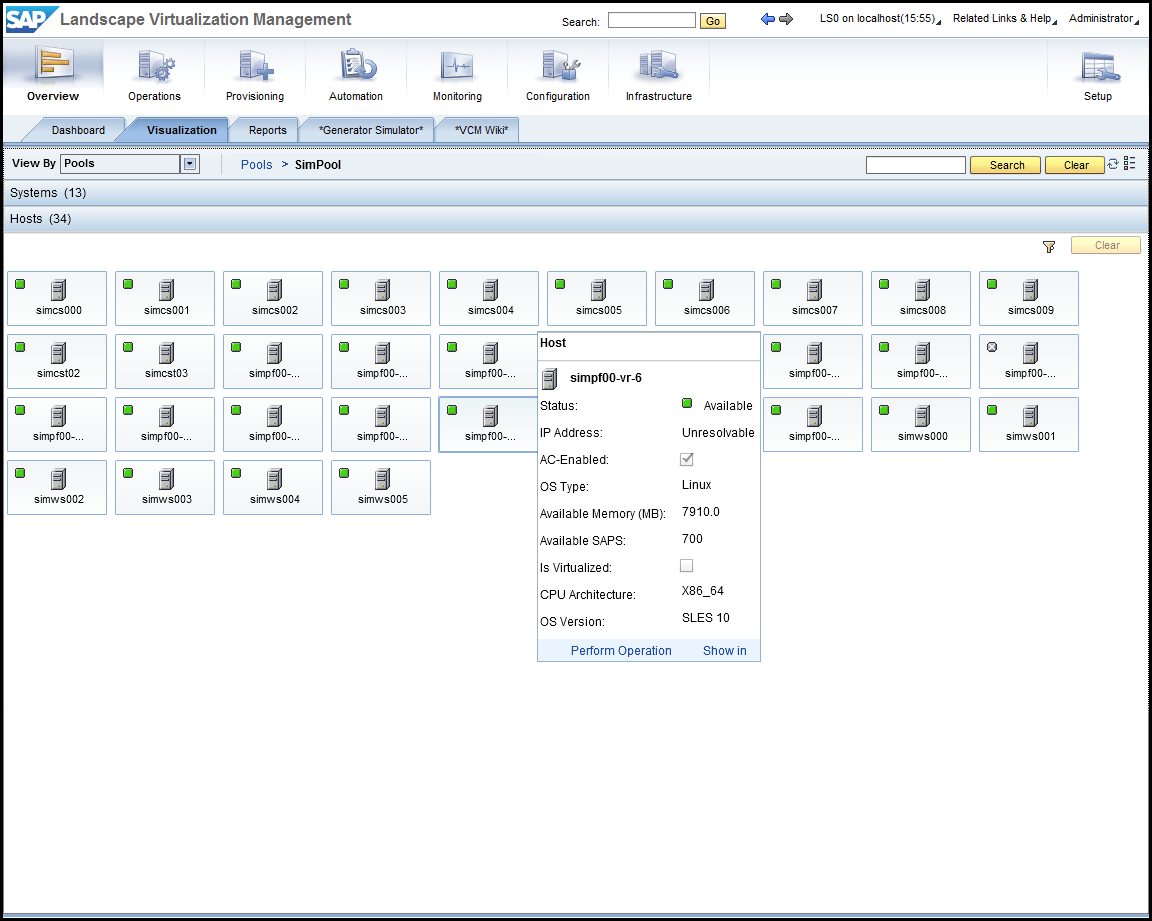 "....This is accomplished by creating a series of Web services or scripts which implement the existing pre-clone, cone, and post-clone steps for both source and target system......"

Where could I get more details about the Web services or scripts to do the cloning ?

One of the LVM Product Management colleagues, Michael Hesse, has created a nice blog on various ways to customize LVM, including how to use the custom cloning feature.  You can find this blog at http://scn.sap.com/docs/DOC-48942.