In the past I have been frequently asked which deployment option I would recommend for SAP NetWeaver Gateway. The official documentation can be found here in SAP Online Help.

A YouTube video that is based on this blog can be found here:

Root cause for this discussion was that basic Gateway functionalities if running on releases prior to SAP NetWeaver 7.40 are contained in different AddOns that have to be deployed separately.

*,** For the sake of readability I am using in the rest of the document the following terms:

So instead of discussing where to deploy which AddOn the discussion will be around whether you will go for a hub architecture or whether you will activate the Gateway service on the SAP Business Suite system itself (also called “Embedded Deployment”).

Since the Gateway software components will be part of each system running on top of NetWeaver 7.40 in the future you still have basically three options how to run SAP NetWeaver Gateway services in a system landscape.

As a starting point all four deployment options are shown.

In this case the SAP Gateway server functionalities are only used on one dedicated server, the hub system. The service implementation takes place in the backend and the services are registered in the backend systems and are activated (published) on the server. The Gateway service is thus deployed in a SAP Business Suite backend systems where either the AddOn IW_BEP is installed or that is running on top of SAP NetWeaver 7.40 leveraging the software component SAP_GWFND.

+ Routing and composition of multiple systems is supported

+ Hub System can be based on a newer release (7.40 or 7.50)  that supports additional authentication options (Kerberos, SAML Browser protocol, OAuth)

+ Hub System can be based on a newer release (7.40 or 7.50)  that supports the deployment of SAPUI5 apps or can act as a frontend server for SAP Fiori

+ Enhanced security because of no direct access to the backend system 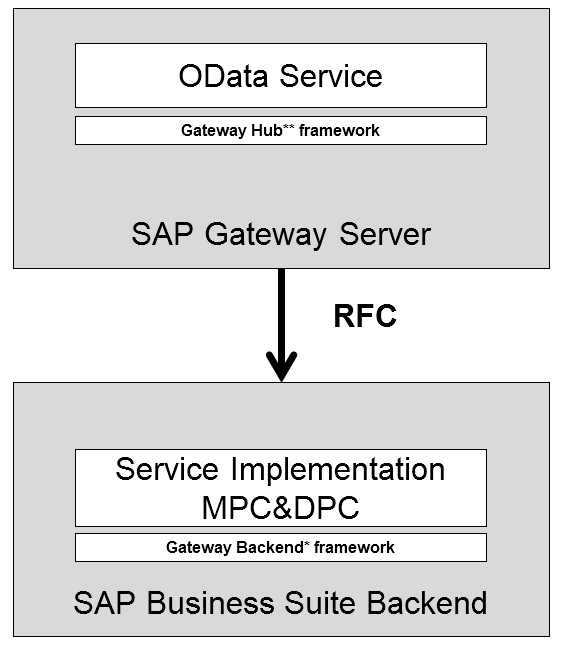 Option 2 (Hub architecture with development on the server)

In this case the SAP Gateway server functionalities are also only used on one dedicated server, the hub system.

In contrast to option 1 also the service deployment takes place on the hub system. This option is used if either

In this case the developer is limited to the interfaces that are accessible via RFC in the backend.

The hub system should be a SAP NetWeaver ABAP server and not a SAP Business Suite system (see last paragraph).

Pro’s: (in addition to the ones mentioned in option 1):

Con’s (in addition to the ones mentioned in option 1):

– NO direct local access to metadata (DDIC) and business data in the service implementation. This means that reuse of data is limited to remote access as mentioned above 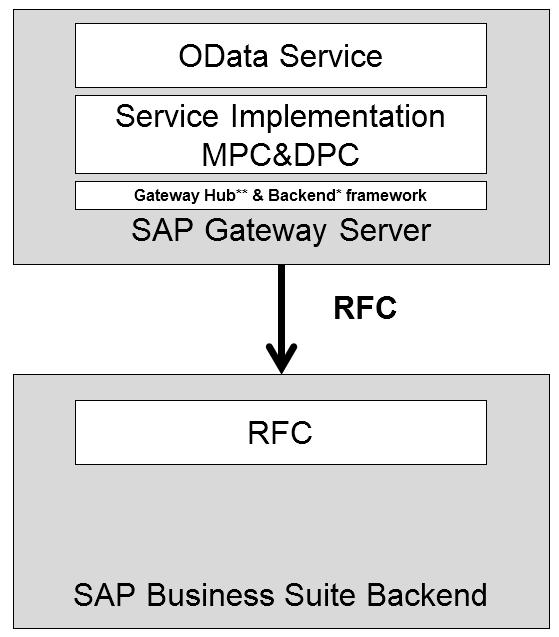 In this case the services are developed, registered as well as published in the SAP Business Suite backend system.

+ Less runtime overhead as one remote call is reduced. This is especially true for SAP NetWeaver 750 SP04 or later as I described in my blog How to take advantage of the performance improvements in SAP Gateway in SAP NetWeaver 7.50 SP04

– If embedded deployment is chosen the system must not be used as a hub for additional backend systems. As a result Routing and composition cannot be used. An explanation can be found in the following paragraph.

Option 4 (HCP OData provisioning aka “Gateway as a Service)”

Please note: This option is currently only available as part of SAP Fiori Cloud Edition.

This option is similar to option 1 in a sense that service development takes place in the SAP Business Suite backend system but the SAP Gateway hub components are now running in SAP HANA Cloud Platform using the service HCI OData provisioning. The great advantage for customers is that they do not have to run their own SAP Gateway Hub / SAP Fiori Frontend Server. The OData service as well as the SAP Fiori applications are deployed on SAP HANA Cloud Platform and are securely connected to the SAP Business Suite backends using the SAP Cloud Connector.

+ Composition of multiple systems is supported 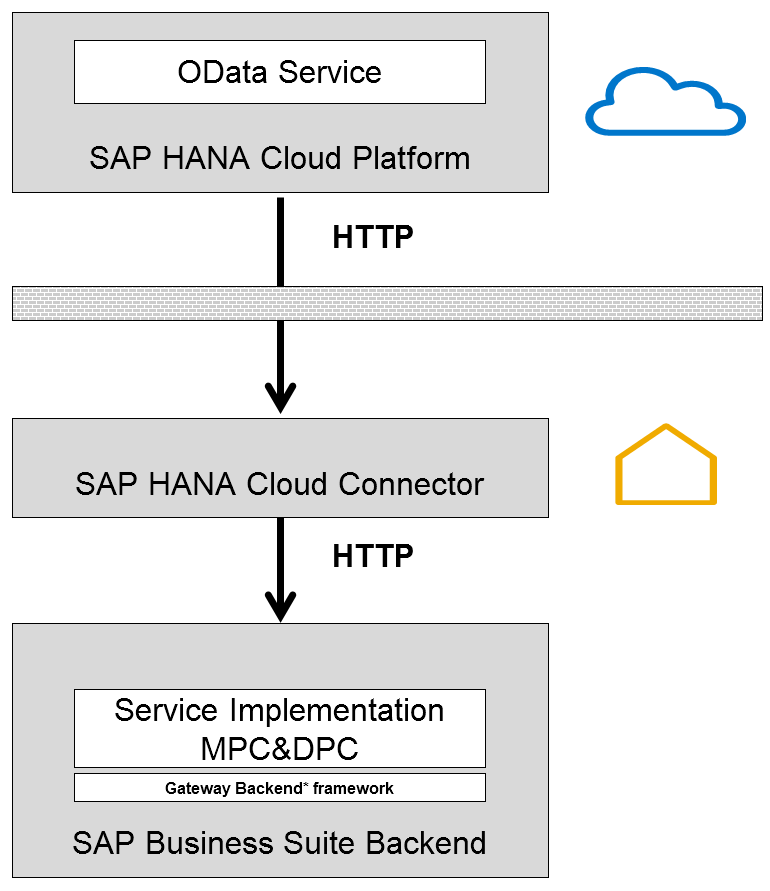 You should not use a SAP Business Suite System with embedded deployment as a hub system for additional backend system.

Such a situation can occur because it might not be possible to upgrade the hub system at the same time as the backend system. Internal policies might dictate that a SAP Business Suite system that is used as a hub must not be upgraded.

To avoid such a situation the recommended approach is to choose one of the following options: Please have look at SAP Note 1830198 – SAP NW Gateway: Dependencies Between IW_BEP and IW_FND that is mentioning dependencies between IW_FND and IW_BEP.

Also there the main understanding is that we do have one IW_FND hub installation and connected SAP Business Suite systems in where IW_BEP is installed.

Additional Information in the SAP Documentation