BI 4.1 Sneak Peek in Australia: A bit of history

In June 2013, we will be holding “Sneak Peek” seminars around Australia for BusinessObjects BI 4.1, featuring Adam Binnie from SAP with my good self doing the technical demo. This will make the 11th time I have done a “Sneak Peek” for a new software release in Australia and here is a bit of that history:

The very first “Sneak Peek” I ever did was way back at the end of 1997, while I was working for Aeronaut Industries, who was the Crystal Reports distributor/master VAR at the time. I had only been in Australia for a little while, having migrated there from one of the original Crystal Decisions partners in the US. We invited customers, software developers, resellers and anyone else who wanted to come to our office in St Leonards in Sydney at 48 Chandos Street.

We had a great breakout room on the top floor of the building, which featured an outside area and small swimming pool that nobody ever used. We put out white plastic chairs, a few nibbles and setup the data projector, which at that time was the size of a small house. There wasn’t any air conditioning up there, so it was hot as blazes, but nobody seemed to mind. 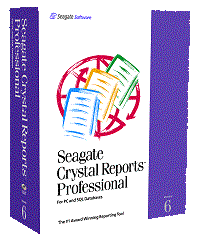 I spent the night before the Sneak Peek installing Seagate Crystal Reports 6 and Seagate Crystal Info 6 on my Windows-NT laptop using the latest beta (code-named “Black Widow”). On the day, the software worked reasonably well but fell over a bit when the Java version of Info WebAccess (the precursor to InfoView, BI Launchpad, etc.) fell over when I tried to schedule a report with parameters. Luckily, I am used to “tap dancing” during demos, so a quick browser restart and it worked the second time, which got a few cheers from the assembled crowd.

From that point on, with every new version we would hit the road, launching the software in Australian capital cities to Aeronaut customers, software developers, resellers and users.

Some of the more memorable moments included lugging the 15kg data projector around in a big metal case, which we would check as luggage and drag from venue to venue. Or doing karaoke at the hotel bar and then drinking the entire room mini-bar contents the night before an event in Brisbane (it wasn’t just me, Rhody Burton from then Seagate Software helped!)

Another highlight was the “Free” giveaway of 50 licenses of Seagate Info 7 (the infamous “Dog CD”) which in North America was great to get a company started, but in Australia that was frequently all the licenses they would ever need! 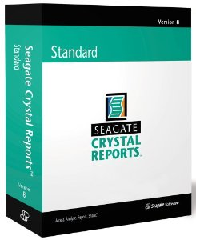 As we went on through the next few releases (8, 8.5, 9), the venues and the crowds got bigger, as we started using hotels to host the events and my co-presenters included Dan English (now at QlikView), Jenni Lewis, Jenny Xenos (both now at SAP), Kylie Bower (still working with the tools) and many, many more.

The hallmark of these “Sneak Peeks” was always a focus on the technology—hard core users and report developers wanted to see what was new, improved and if their favourite annoying little bug had been fixed. And the demos were legendary, normally using a beta version or the first RTC version, showing off new features and functionality. And sometimes things would fall over, but the crowd was happy just to have a look at the new version, warts and all.

In 2001, when we started Avantis, we were focused on Crystal Decisions consulting/training and we knew that we wanted to continue the tradition. So in 2004, we gave our clients the very first look at Crystal Enterprise 10 (with all the bless and whistles) and “Crystal Reports Explorer” got the most praise from users and a few claps and cheers—it provided ad-hoc reporting for Crystal Report in your web browser and was written partially in CSP (or “Crystal Server Pages”, which was really ASP in disguise.) 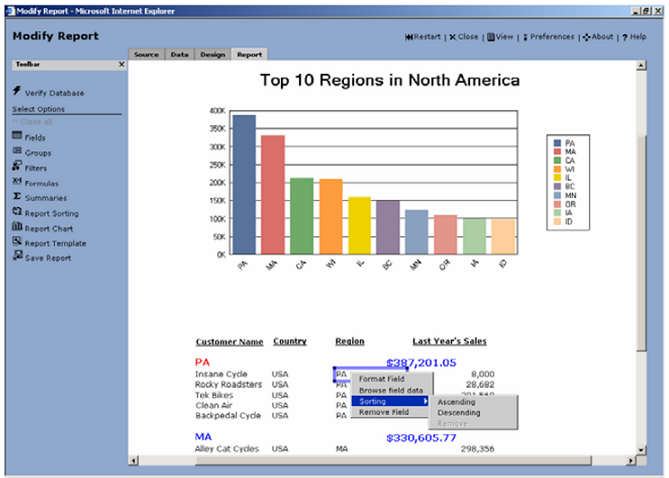 For that demo, I didn’t put a record selection filter on the report I was demoing, so Crystal Reports Explorer ran like a dog while I tried to make small talk (Hey, look out the window… is that a bird?!)

Sadly, Crystal Reports Explorer was deprecated with the introduction of Web Intelligence for ad-hoc reporting, but it will always hold a special place in my heart!

With the acquisition by BusinessObjects, the “Sneak Peeks” became the common ground between old BusinessObjects Developers and the Crystal developers, as both wanted a look at how the two tools were going to come together.

One of the biggest events ever in Sydney for Avantis was the Sneak Peek for the release of BusinessObjects XI, which was built on the old Crystal Enterprise platform but incorporated the BusinessObjects tools (including Universes, Web Intelligence and Desktop Intelligence).

There was some grumbling from both camps, but I think by the time the XI R2 release and seminars came around, both groups were used to the idea that the two toolsets had come together in a single platform. (Like SAP BW and BusinessObjects developers today!)

With the release of Business Objects XI 3.0, we were finally one community and in October 2008 we had the first “Sneak Peek” in it’s modern format– a bit of a presentation on what’s new and then a live demo of the software, usually held in the morning as a breakfast seminar. This was also the first time that the product officially incorporating the SAP branding, with “SAP BusinessObjects” coming into play and the release was heralded as the “The Intelligence Platform” 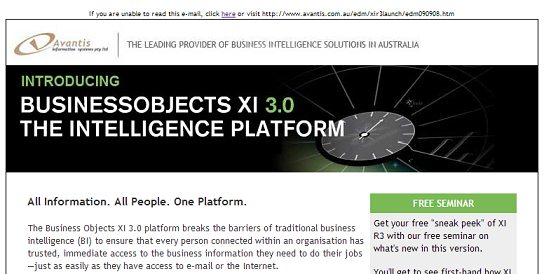 Given the delay between the XI 3.1 release and BI 4.0 coming out, we missed hitting the road for a new release, so in between we snuck in a series of “Xcelsius in the Real World” seminars where we highlighted real-world dashboards and examples of where customers were using dashboarding to great effect.

Again, the same format as the sneak peeks with live demonstrations of real, working dashboards, with integration and drill-down to Web Intelligence, Crystal Reports and Explorer Workspaces.

After a long Ramp-Up in April 2011 we hit the road once again for the eagerly anticipated release of BusinessObjects BI 4.0, with seminars in Sydney/Melbourne/Brisbane and online. This also marks the first time we split out the audiences and did a separate even for Crystal Reports Server, for the new release. For the BI 4.0 “Sneak Peeks” there was again a split in the audience between two developer camps– this time it was SAP BW developers and the SAP BusinessObjects faithful. Most of the BW developers were worried about the integration, while the BusinessObjects developers were worried that other data sources (besides SAP) would not be as fully supported moving forward.

The good news is that with the “BI 4.1 Sneak Peek” we finally have the proof that BusinessObjects and SAP data sources work better together– 4.1 has been billed as “the release you have been waiting for” with tighter integration with SAP data, including native access and single sign-on to SAP HANA, as well as support for a host of third-party data sources, including Oracle Exadata/OLAP/Essbase, Teradata 14, XML, Web services and more. This release also brings back some of the missing features from XI R2 and XI 3.1, to make migration for existing customers a reality.

And after 15 years and 11 releases, I am more excited than ever to show off BI 4.1– if you are in Australia (or just fancy a vacation) we hope you can join us in June to celebrate the next evolution for BusinessObjects software.