SAP is embarking on a global program to hire people with autism as software testers, programmers and data quality assurance specialists, the company announced Tuesday. Autistic employees can offer competitive advantages, according to SAP, while helping the individuals secure meaningful employment.

“Some people with autism, which affects about 1 percent of the general population, score very highly on intelligence tests and possess extraordinary powers of observation and concentration,” Financial Times stated Tuesday. But “they can find it difficult to interpret facial expressions, body language and sarcasm [and] as a result, they often struggle to perform well in job interviews.”

One percent of SAP’s global workforce will be autistic by 2020, thanks to a partnership with Specialisterne, a Danish company that helps autistic people around the world find technology-oriented jobs. Most of the employees in Specialisterne have a diagnosis on the autism spectrum, typically serving as consultants in fields such as software testing, programming and data entry.

“I started this when my youngest son was diagnosed with autism — that’s 13 years ago,” Specialisterne founder Thorkil Sonne told an SAP webcast at SAPPHIRE NOW last week. “That opened my eyes to what now is going to be a reality at SAP.”

Another pilot in Ireland is wrapping up the screening phase for five positions. SAP will expand the program globally this year, starting in the U.S., Canada and Germany.

“The announcement marks the first time that a renowned German company has opened the mainstream job market to a group of potential employees who have been largely overlooked,” Spiegel noted Wednesday. “The country’s FBA autism association has welcomed the step and encouraged other companies to follow SAP’s example.”

“Turning Disability into a Differentiator by Leveraging the Talents of People with Autism with Anka Wittenberg: Webcast” in SAP.com 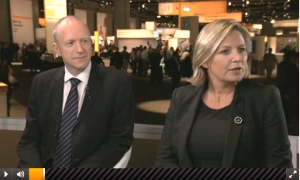 Thanks for sharing this with our community Derek (I've already heard some great feedback from external folks via the NY Times article), but as a huge fan of inclusion and thinking how we as workers can gain great insights from empathy, the very moving part of this story, if I understand it well, is that "mainstream" developers working alongside their autistic peers are also enriched.  Had heard from insiders that interacting with people of "special abilities" creates an atmosphere of being vested in another's success and well-being.  If this is true than such activities are going to enhance productivity and retention.

From what I've read, Marilyn, the pilot program in India has already proven its business value in enhanced productivity and camaraderie. So the company and employees are winners.

As am I, Tim. This program could be a tremendous opportunity for everyone involved!