When Did SAP Become Cool?

I stayed up late to watch Canadian rockers Rush (finally) get inducted into the Rock and Roll Hall of Fame. After delivering a proper roast and endearing retrospective, Dave Grohl (Nirvana, Foo Fighters) enthusiastically asked the crowd, “When did Rush become cool?”

For the record, Rush has produced 24 gold records and 14 platinum records (3 of which have gone multiplatinum), placing them in the top 3 rock bands for the most consecutive gold albums. Total worldwide sales approximate 40 million units. 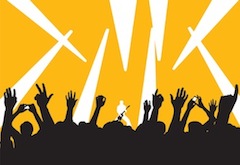 Clearly, Rush has always been cool – even if questionable wardrobe choices and quirky song titles like “The Temples of Syrinx” suggest otherwise.

And then it hit me: When, exactly, did SAP become cool? Like Rush, has it taken SAP decades to gain the admiration and respect it deserves from the industry-at-large? Or has the company always been cool despite some of its missteps?

Whatever your take, the cool factor at SAPPHIRE NOW 2013 was certainly off the charts. Here were a few of my favorite things:

Is SAP cool? What were some of your most memorable SAPPHIRE NOW experiences?

Pssst! All the cool kids are following me on Twitter @TClark01

This blog post dances around the "intangible cool factor" that I've discussed with Grace Chiu. There's no easy answer to the question in your headline, Tim.

But if I had to take a stab at it, I'd say that SAP became cool when it started blanketing every airport on Earth with "____ runs SAP" posters.

It's been a while since I have seen a ___ runs SAP poster in an airport. Maybe Australian airports aren't cool.

It must be the airports, Nigel. Australia is still cool.

And Ron Dennis on stage with Jim on Wednesday at SAPPHIRE NOW 2013 testing new SAP App. and comparing a business to an F1 team?

How cool it that?

Marc-Andre, very good point, how could we forget McLaren?! It's a very cool story indeed and gets you thinking about SAP in new and exciting ways.

Gentlemen, I submit that SAP was cool before McLaren's victory lap at SAPPHIRE NOW 2013. But if SAP wasn't cool prior to that keynote, it certainly was afterward.

I'm just glad for another chance to use the #MadeInCanada hastag (Rush), because as everyone knows, Canadians are cool 🙂

For me, it was when I saw '--runs SAP' posters in the airports and in the cities in US, UK, Netherlands, France, India and attended 2005 SAPPHIRE, Boston Bon Jovi concert - that was cool.

Yep, it was totally the posters, Ramesh.

This is more your speed, Tim:

First of all, Rush has always been cool (says the Canadian). Put Tom Sawyer on, turn it up to 11 and tell me I'm wrong.

Like Rush, SAP has always been cool, people just didn't know it. It wasn't until SAP tied its identity, its brand, to the success of its customers and started showcasing them front and center in its advertising, that people could see the coolness. I mean, ABAP ain't cool and never will be, but guess what? All those rock-and-rollers out there banging on Fender guitars in front of thousands of screaming fans are cool - and Fender runs SAP!

Good one, David. I'll chalk this up as another +1 to my first comment.

I didn't realize how cool SAP was until I joined SuccessFactors, shortly before SAP's acquisition of SF.  As an HR leader, my impression of SAP was colored by poorly managed implementations of HCM - which had nothing to do with SAP itself.  The first day I started sitting in the Newtown Square offices, the coolness became apparent right away.  After my first SAPPHIRE this year I think my peers would like to hear me talk about something other than how cool SAP is.

As a South African, I find SAP's supporting projects like Desmond Tutu's AIDS Foundation the height of cool. Make the Foundation run better, so that staff are freed up to help people with AIDS - how cool is that? I also loved the banking the unbanked story - how SAP helps people in SA do their banking via their mobiles. And the remote spaza shop owners being able to restock their shops via mobile - another cool SAP/SA story.

SAP definitely walks the walk regarding worthy causes, Charlotte. And that is very cool.

(As the author of the blog post about SAP helping South Africa's biggest bank serve the nation's poorest citizens, I'm happy to hear that you enjoyed that story too.)

The reason for SAP to be suddenly viewed as cool are:

1, ability to interact with iphone and blackberry devices

2. ability to make the erp as a mobile commodity where it can provide necessary data across various spheres whilst maintaining the robust nature of  the product.

Thanks for chiming in Burzes and very much agree that this is the phase where we see SAP kick its strategy into overdrive. Take this recent post from SAP's Sanjay Poonen:

At some stage depending on the business trends I can see either cloud based erps or the current status quo erps. But what they both shall be doing is

1. interacting with web based services and apps for phones across multiple spheres

2. making the old SAP ERP screen a part of the 'history books' coz no one(end user perspective) will ever see them if my point 1 came true