21 19 28,605
ℹ   This is the continuation of my previous blog Why SAP ERP 6.0 EHP6 contains SAP BASIS 7.31 which you should have read before starting with this one. Now in this blog, the journey on product releases and software component versions for SAP ERP and SAP NetWeaver continues, trying to dissolve latest mysteries.

A lot of news are out with the general availability of SAP products like SAP NetWeaver 7.4 (see SAP NetWeaver 7.4 made Generally Available (GA)) and SAP enhancement package 7 for SAP ERP 6.0. This blog focuses on the software versioning part of the story only, and on the ABAP part of SAP ERP: the SAP ERP – ECC server.

The first nice part of the story is: things are becoming simpler. The product SAP NetWeaver 7.4 is using software components that have corresponding numbers, like SAP BASIS 7.40 and SAP ABA 7.40, to pick out two prominent examples. Even the kernel has version 7.40 now – I skipped this part of the SAP software world in my first blog – and you know why 🙂

And now to the business part of the SAP software: we have the EHP7 for SAP ERP 6.0, which is part of  SAP Business Suite 7 Innovations 2013.

The next nice thing of the story is: this version is based on SAP NetWeaver AS ABAP 7.4. So finally business (“Suite”) and technology (“NW”) use the same SAP NetWeaver foundation! This applys to the other parts of the SAP Business Suite as well (SAP CRM, SAP SRM, SAP SCM).

And with respect to the software component versions, both use SAP BASIS 7.40 and SAP ABA 7.40, see picture. 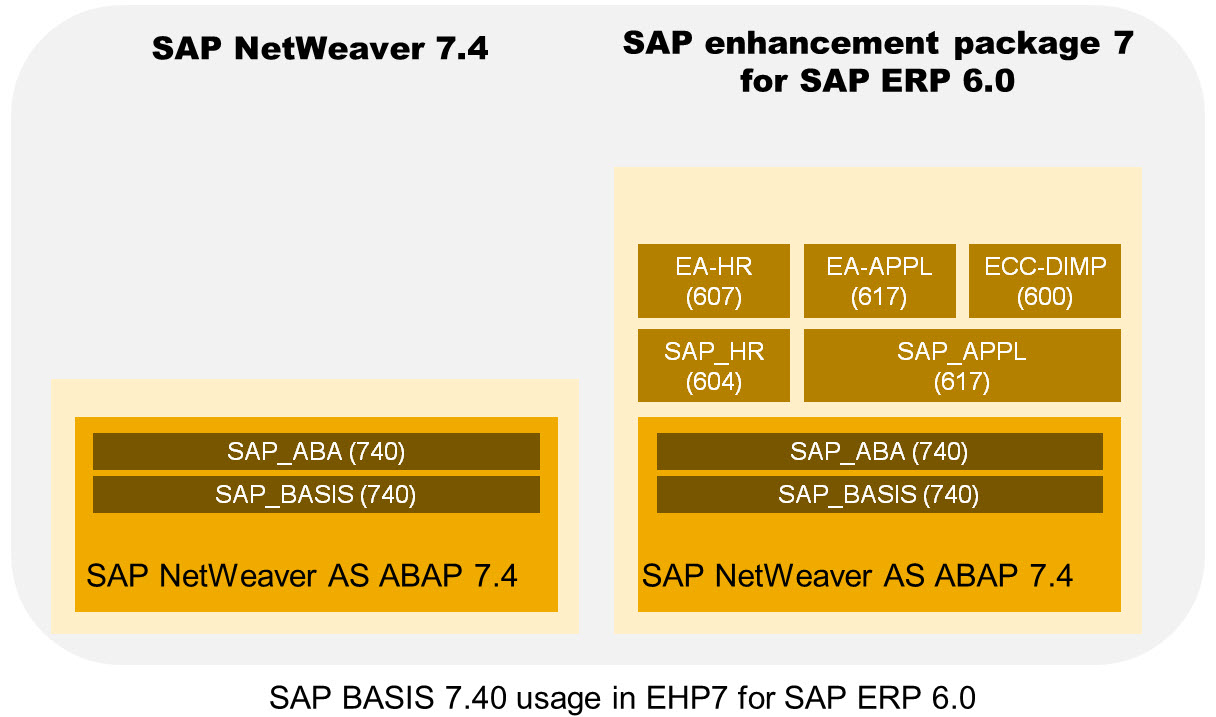 I know that you have already anxiously examined other details in the figure … how about SAP HR? And SAP APPL? No further development has taken place in software component SAP HR, so it remains with 6.04. And for SAP APPL, development and adaptions have been done, so it becomes 6.17. But why 6.17 and not 6.07?

Two steps from 6 to 7
After “EHP6 for SAP ERP 6.0”, the “EHP6 for SAP ERP 6.0, version for HANA” was made available, exclusively for the SAP HANA database. With this, the versions of the software components had to be increased. So the version number for SAP APPL was increased from 6.06 to 6.16, as one example. Now the next increase takes us from 6.16 to 6.17. That way, you still find a correlation between SAP APPL software component version number and EHP number.

❗ Note that “version sequence” does not mean necessary update path: you can update an SAP ERP 6.0 EHP2 system directly to EHP7

Again, like described in the first blog, some software components may even stay to lower version as well, depending on your choice of technical usages during update. That is why ECC-DIMP is on version 6.00, as one of several possible examples.

Looking forward to your comments!

And this time, for customers deploying ERP6 EHP6 on HANA, its a must-know software version controlling, they should know, or otherwise SURPRISE 😕 , TaDa!

What's your say? I would be inquisitive to know! 😏

thanks for the comments.

Regarding the "1": yes, as far as I know this is just a differentiator.

I'm more from BW side, but still relevant to know the product versioning !

Just trying to put together the versioning from the start to supposed future releases.

Would it be correct, if I assume that Business Suite 7 major release stays the same i.e. ERP6 and newer EHP releases i.e. EHP8 and so on, they will be subsequently based on new  SAP Netweaver Foundation platforms i.e. NW 7.5,7.6 and so on?

and for future releases=>

Is my assumption correct?

Thanks for the detailed blog. This confirmed my understanding. So, it means that if a Customer wants to migrate to Suite on HANA , i.e.say for ex from ECC 6.0, Enhancement Pack 5 to Enhancement pack 7.0, it means it would by default get features included in Enhancement pack 6.1.(that was released for HANA), right ?

As I am a bit picky with the numbering, I have to comment that there is no Enhancement package 6.1 or 7.0 - but of course I know what you mean. Sorry for being fussy ... 😉

In our context, is it possible to upgrade just SAP_BASIS part or do we need to apply EHP6 or EHP7 ?

Unfortunately a lot of the Fiori apps require an EHP upgrade now with some of the UI components especially requiring a NW 7.4 or 7.31 system, especially the new launchpad.  Subtle but critical change from wave one....

Done the work myself. Only a few weeks these days for a Technical upgrade 😉

yes i understand, but applying EHP on SAP ECC in order to have embedded gaeway installation require lots of business non regression tests...

I will prefer to install gateways on central hub deployments....

and as Boris Rubarth wrote:

...some software components may even stay to lower version as well ...

so, there is a coloured mix of version-numbers ... within your installation.

Is this a known issue or should it say Enhancement Pack Seven ?

where exactly do you see that information "EHP6" - in which field of the system/status dialog?

When i click though onto component versions it lists the following. Should it be EHP7 for ERP6 or still list EHP6 ?

this field should reflect the real system status (nowadays). Please note that after EHP6 for ERP 6.0, there was a specific "EHP6 for SAP HANA", which is based on SAP_BASIS 7.40 as well. So the question is which software component version is shown for SAP_APPL ...

why this information did not come officially from SAP ?

> The first nice part of the story is: things are becoming simpler

this sounds good, but - i can not believe this.

and therefore, a simple SPS-update becomes a much bigger project because of SUM-usage. (instead of hours or few days, this SUM-update may need some days, maybe weeks)

where is an official statement to this important point ? ❗

i hope, that will come,

your  this blog delete  my confustion . .  it is really good.

thanks for your effort .

Very good compilation of the info,, Boris. Thanks.