Mr. October Visits SAP in May

by Ben Hancock and Sarah Harvey

Baseball Hall of Famer and five-time World Series champion Reggie Jackson came to SAP’s New York City offices on Morton Street today for an informal meet and greet with employees, and to discuss his Mr. October Foundation for Kids. 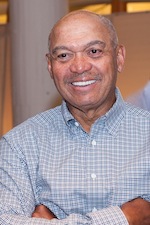 “SAP has a long heritage of community service and our mission is to help the world run better and improve people’s lives,” said Chris Burton, Vice President of Global Sponsorships at SAP. “SAP is delighted to support the work Reggie is doing to help provide high technology education opportunities for at-risk youth.”

Jackson’s organization provides STEM (science, technology, engineering, and mathematics) education to at-risk youth in the African American and Latin American populations. In his address to SAP employees, he talked about how technology can be a means for change in education, as well as in the way sports are played and consumed. He is thrilled to be partnered with SAP to reach his foundation’s goals.

Jackson is a natural partner for SAP because he brings together two of the company’s main focuses, sports and education. In a career that spanned more than two decades, Jackson led the league in home runs on four separate occasions, finishing 13th on the all-time career home run list.

“As a kid growing up, I was crazy about the Yankees and, of course, Reggie Jackson,” said Aesop Lim, a solution expert at SAP. “I watched him hit three home runs in a World Series game. It’s great to see him now associated with SAP.” After Jackson made a short speech, SAP employees lined up for photographs. Jackson also autographed baseballs, hats, and 8×10 photos.

Jackson’s visit came on the heels of SAP’s official entrance into the sports and entertainment industry. SAP has been a longtime partner of many professional sports teams and events, including the New York Yankees, and is now offering its analytics software to enhance player recruitment and management and the entire fan experience. SAP’s fully-integrated partnership with the Yankees, for example, means there is prominent SAP branding in Yankee Stadium. Additionally, visitors to the SAP Lounge can play out statistical baseball scenarios—all powered by SAP software.

Great event! And wonderful to see that Reggie Jackson cares about community.

All the tweets I saw from the event were extremely positive.