Last week during Sapphire Orlando SAP introduced SAP Fiori as a way to simplify Enterprise Software by providing a user interface that we are used to every day when we use Consumer Bases Apps for Itunes or Google Play.

After doing some investigation on the concepts of SAP Fiori i would like to share my finding with you.

The first release of SAP Fiori includes 25 apps for the most common business functions, such as workflow approvals, information lookups, and self-service tasks in the areas of HR, Sales and Purchase. Building Apps on top of SAP business processen is now common for the last 3-4 years. Before that we also build simple UI’s but just called them HTMLB or any other technology driven (web)application. What we have learned is that the diversity of the configuration in SAP backend processes is huge. Lot’s of organisation spend quite some time setting up their SAP mobile platform just to figure out that their backend processes are customised in a different way for standard SAP apps to work. In worst case scenario they have gone even beyond SAP standard processes and build their own logic. Annouchment of great looking new apps can create excitement within organisations but also lot’s of frustration when they don’t fit they way they have configured their business processes.

Thank you SAP, prays are being heard. After already showing some demo’s during last years Teched web responsive design has made it from just websites to productive applications. This allows organisations to deploy (and manage) a single code deployment that can serve any device on any platform running any screen resolution. (at least that the theory 😉  Proof is in the pudding. The demo video’s shows quite complex scenarios like “My TimeSheet” that i would love to test out on my mobile device running in both portrait and landscape mode.

There is no need for additional (mobile) components. Authentication and authorisation is all handle by traditional tools like the profile generator (PFCG) and preconfigured rolls are delivered. There seems to be some kind of home screen configuration that centralise access to all apps.

Depending on your currently SAP backend system release you are able to run it directly from a single backend system. In reality most organisations will deploy a separate SAP NetWeaver Gateway Instance to run their Fiori Apps (and possibly other gateway based applications)

With Fiori SAP is delivering (online web based) apps directly from the backend system. There is no more need for a separate mobile platform. To my opinion it does make sence that these apps can also be made available though the new SAP Mobile platform, enterprise edition, Cloud version. Main reason would be to provide a single platform to combine, and control, both SAP backend Apps and e.g. own build SAP Hana Cloud apps.

Since there are plans to also provide offline capabilities in the new oData releases less existing application will require SAP Mobile Platform.

Addendum 11-06-2013: The following side provides some insight in planned “offline” integration with SMP. My guess is that it will work on current MBO concept that get their data from the OData connection. Since there’s no MBO in the Cloud version of SMP we need to wait intill we get some more insight if (and how) Cloud SMP will support offline. 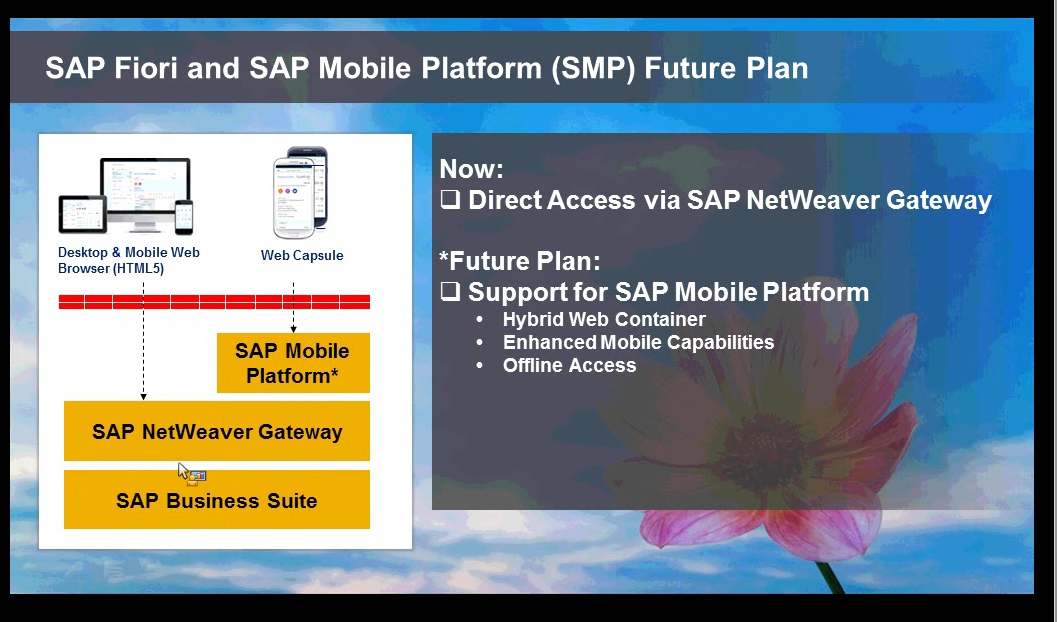 There is no overlap for user experience point of view. I think everyone who took a look at the new Fiori scenarios must admit that they look great.

But if you take a closer look at the SAP Fiori Installation manual you will see that all scenario’s rely on the exact the same components in the backend system as their SAP Mobile platform Apps equivalent. If you take for example the Leave Request App for the SAP Store running on iPhone and the one that comes with SAP Fiori both use the backend component GBHCM0002 (as described in OSS note) So from a functionality point of view there doesn’t seem to be a lot of difference. You could say that actualy SAP Fiori is no more that just a different UI technology on top of the same business logic. It’s logical that all current Webdynpro based Self service application will shift to (Fiori like) HTML5 based apps. All current mobile native apps will follow.

Finding 6: Adoption of other UI technology

For SAP Fiori to work SAP has developed additional standard SAP Netweaver Gateway Models based with oData interfacing. Fiori uses SAPUI based HTML5 on top of that. If an organisation has already adopted an other UI Framework for deploying self services it should be relatively easy to build thier own UI’s on top of SAP Fiori Gateway Models. I hope SAP has adopted a clean MVC framework with Fiori that allows easy adoption of other UI frameworks. Looking forward how these gateway model can serve Microsoft Sharepoint based apps adopting oData (maybe Showkath Ali Naseem can comment and share experience) Since SAP and Microsoft are not delivering any standard scenario’s with Duet Enterprise i assume it’s quite easy to build your scenarios reusing Fiori gateway models.

Finding 7: Everything comes with a price

Currently SAP charges 100 Euro per user additionally for the use of the new Fiori scenarios. SAP please keep pricing simple. I would suggest:

One day after my initial blog i purchased Fiori for SAP Store and started download for installation on our test system. To my suprise Fiori doesn’t come 1 one package. Every scenario’s has his own download page and on each page there are at least 10 download object. Ouch SAP why not just one download. Or maybe 2 to separate between backend and Gateway. 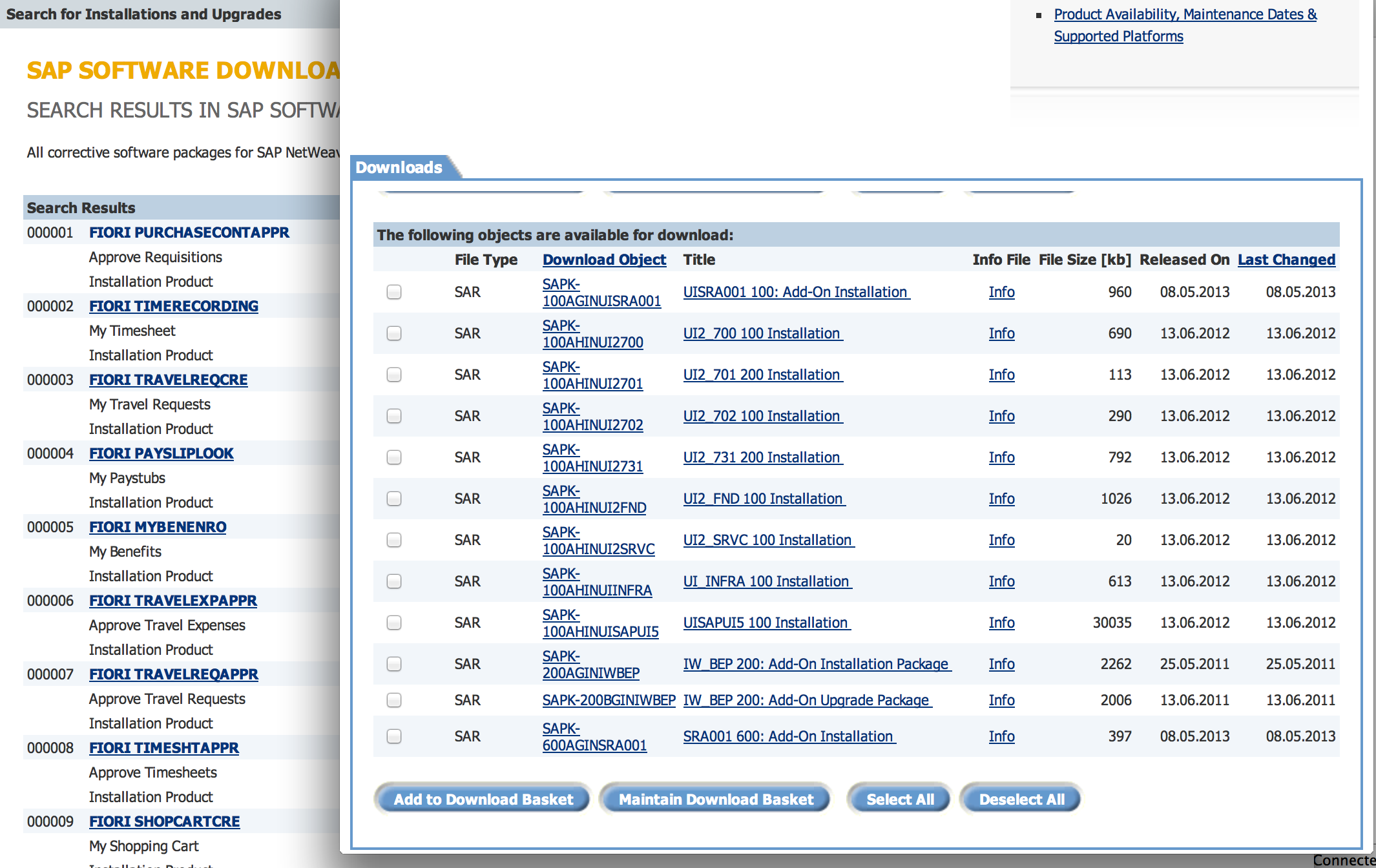 Looking forward to you thought on my findings.

nice writeup and it seems like Fiori is quickly becoming talk of the town after the latest Sapphire(Now). i hope she will stay with us for as long as our cells do. the simpler it stays the easier it will be to draw those 'casual users.'

Tnx Gregory, Don't know how long it will stay with us. UI technologies rapidly evolve these days. (like cells 😉 A clean decoupling via Gateway and adoption of open standards are therefore even more important.

Great blog with some fresh insights!

I like the simplified architecture of Fiori. Makes end-to-end development and debugging much easier. When I first saw Fiori I thought it would be ideal to run inside HANA Cloud Portal. I remembered that it now has mobile capabilities so it seemed to me like a perfect fit.

As for pricing. I agree it should be kept as simple as possible. I am not on the side that say that Fiori should be free. It is not just a new UI for existing functionality. Mobilizing these processes is a huge benefit and having SMP as an optional component seems like a bonus. Still you would of course have to consider MDM et al to mobilize your company. The price of €100 per user seems reasonable. I guess for a large amount of users you can negotiate this with SAP.

I did not know about the plans for offline capabilities for OData. Do you have more information on that? For that to work to me it seems like there has to be some sort of container (à la PhoneGap) in place to handle this. Maybe that's where SMP (an optional component for now) comes in?

Great blog. I'm also interested if you have any more info regarding offline capabilities for OData/gateway?

Hi Jan, please see update that i got on Offline Odata capabilities. Currently SAP is only planning to support this with intergation of Fiori apps in SMP platform.

Thanks Pim - that makes sense then.

Nice blog. And have an issue while testing leave request approval app. When I open the URL for leave approval,getting HTTP 403 error.

Sorry Srikanth can't help you with the 4.3 error. I would suggest to use OSS to get support

I know about some peoples trying to download Fiori.....why so complicated? easy to use for end users.... 🙂 ....not for consultants, developer, clients..

Exactly my idea. Fact is that with Fiori you get multiple components that needs to be installed. First you SAP backend needs to be up to date with User Interface Add-On and NW Gateway running. Then you need to install the abap backed files, gateway models and UI components. If you're lucky your business process in configured in a standard way. If not standard Fiori Apps will not work.
Conclusion: Consumerization trends are nice but with 238.000 different backend systems at customers SAP will have a hard time to deliver Plug and Play Apps. Standardised Cloud offerings can help here. There is a reason why cloud vendors like Salesforce, Workday and succesfactors offer very limited customising options. This allows them to deliver innovation faster.

If you have unanswered questions about SAP Fiori, or just want to learn more, you can join the upcoming "Introducing SAP Fiori" webcast on June 19th at 8am PST.

I need to understand which is the mobility roadmap about MSS and ESS functionalities....SAP will release new funciontalities on both SUP and Fiori? what about the existing SUP apps like Employee lookup? I think these questions are waiting an answer from a lot of customers. Another important point is: "from and end user perspective" what customers will choose? role based app (Fiori) or single app for each functionality (SUP)?

Hi Luciano, thanks a good question. As i understood will upcoming SMP 3.0 release support SAP Fiori Apps. There will also be limited offline capabilities. My thoughts are that current apps will go into maintenance and all new ESS/MSS apps will be based on ESS/MSS functionality. I'm not sure how more complex ESS/MSS scenario's will turn out in SAP Fiori. A roadmap would be nice 😉

I'v got Timesheet app as a local app and be able to personalise the UI with my own wish. While, there are some things unclear - eg how is the user's credential handled in the GW and backend?

Keep coming those excellent blogs.. I wish I cud get opportunity to work on this very soon.

One of my client wants to enhance the SAP Fiori Apps,So How we can achieve on this if there any document is available.

Any body please help me.

How to upload Fiori Apps on Mobile device.

I have made a Fiori  Apps . i have tested on Web Browser.

but must need to know how to test on mobile & Tab devices.

Solution 1: running as a web app on your device.

Upload your app to an application server. Add link in your device; Launch it from your device.

Solution 2: Run as a standalonen app from device:

Download sapui5 lib; Pack your app with the lib using Phonegap; Launch the phonegap project from IDE (Xcode for iPhone or ADT for Android). You should be able to run it on the device. For iPhone, you need specific setting for Provisoning profile, developer certificate etc. For Andriod, just enable the debug from inside the device.

Cant this be enhanced further to work as a stand alone applications rather than to download an app or software to our mobile devices.