Installing AiE – taking the best out of SCN trial version

This document would brief on the steps to be followed to install AiE (ABAP in Eclipse) on the system using the trial version provided here on SCN. This would focus on installing end-to-end AiE on the system including the SAP NW 7.03 SP4. At the time I installed and by the time I am writing this document, the trial version I installed is termed outdated (which can be seen by the last modified date of the document). However, the only explicit difference I have found in pre-requisites is the eclipse platform. This document is written w.r.t Eclipse 3.7 (Indigo) whereas the recent updated version requires Eclipse Juno (4.2 or higher). I would certainly like to spend some time with what I have installed than jumping to the latest which certainly proclaims to have added features.

To begin with, this document gives a good understanding of pre-requisites for installing AiE. However, I would suggest that on downloading ADT (ABAP Development Tools) 2.0 from the same document , there is a PDF named ‘ABAP _Development_Tools_Installation_guide’ , [to open this link now one would needs S-userid and password]which gives a very decent overview of installation and related information. I started the installation with front-end i.e. ADT 2.0 first, after successfully installing Eclipse 3.7 (indigo) . This blog provides a link to install eclipse or alternatively one could contact their organization’s IT infrastructure team to get that. (Just in case one’s system does not have admin rights to install new software!). Once eclipse is installed below steps could be followed:

a)    a) Download AiE easy installation file created by Gregor as per the eclipse version. Unzip the file and follow the steps highlighted by Gregor.

Below screens would appear while doing this: Point to the location having extracted (unzipped)  version of software downloaded above. 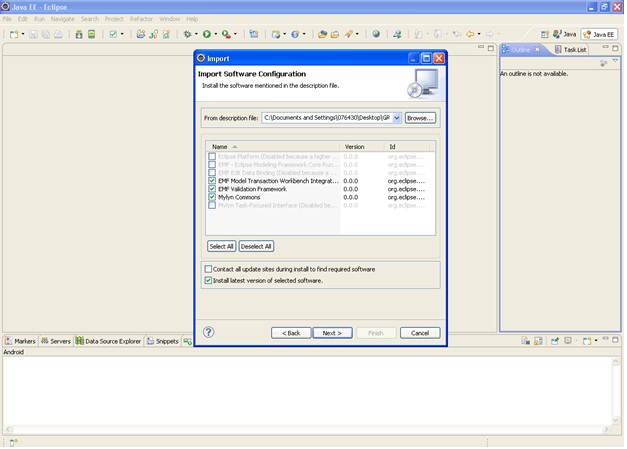 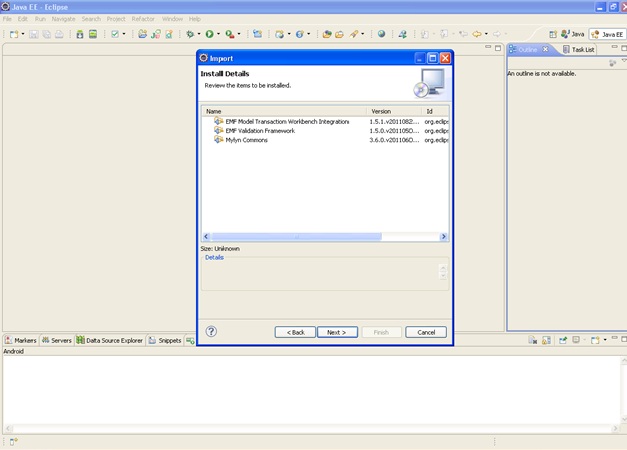 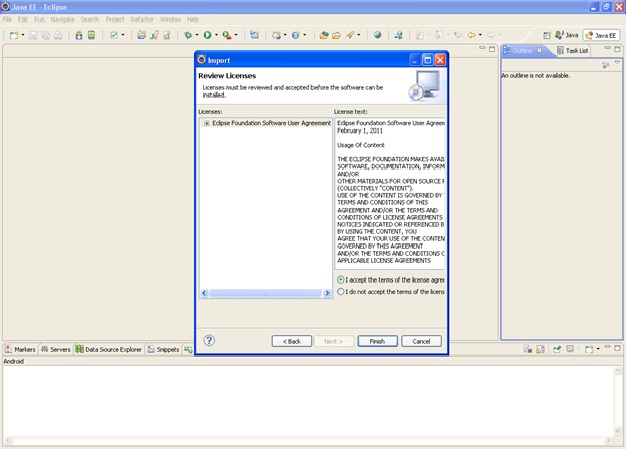 Eclipse needs to be re-started after applying this change.

b) After installing the pre-requisite components, ADT package could be installed as downloaded from here. The folder should have been unzipped. When I installed the folder name started with ‘SAPBASIS******’. 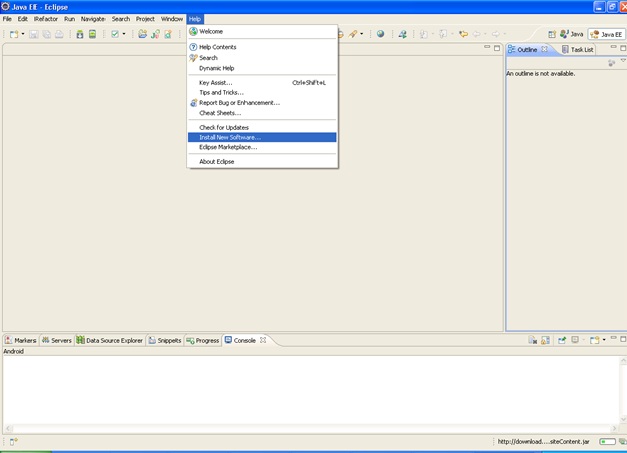 Click on Add button and point to the location where unzipped version of ADT is stored. 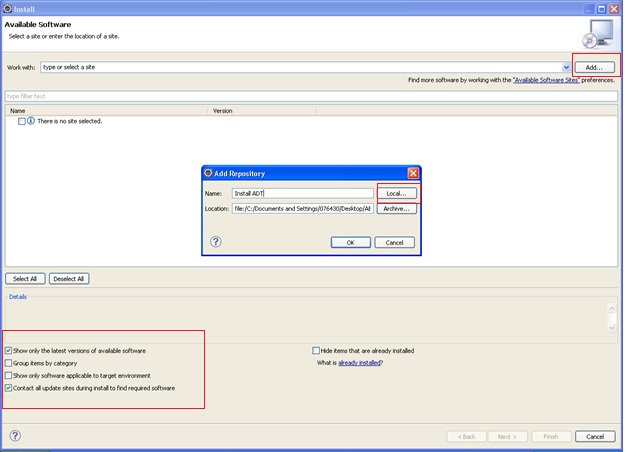 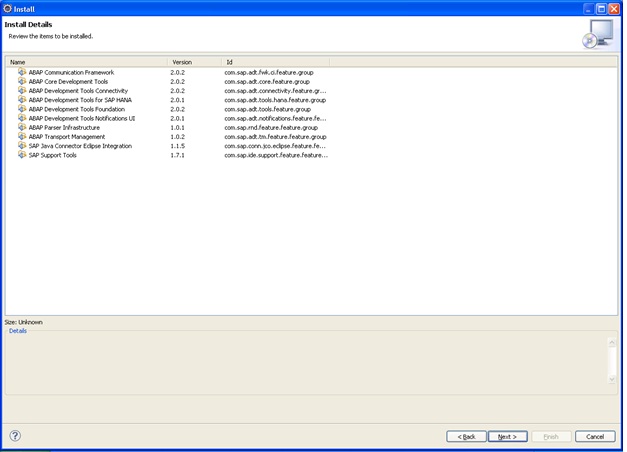 The license agreement needs to be accepted and click on finish. 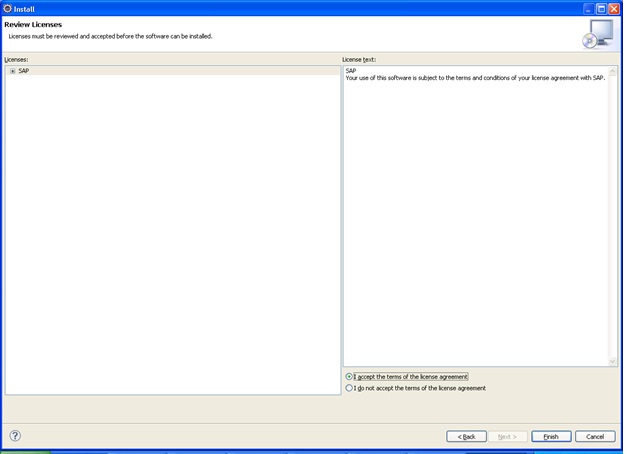 A warning message may appear after this, which can be OKed.

Finally a prompt would ask to restart the eclipse. 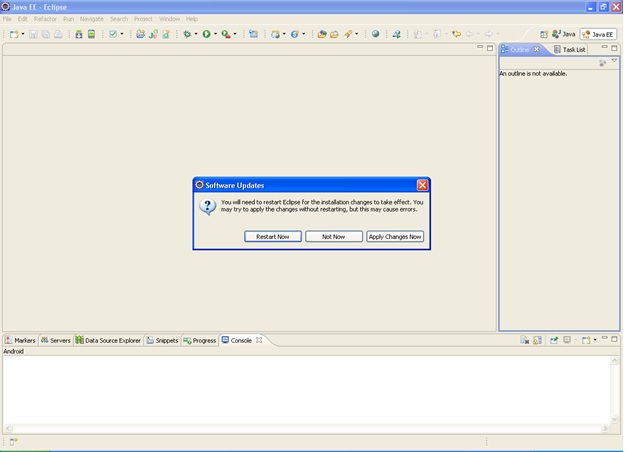 Restart now could be accepted and ADT is installed. 🙂

ABAP folder could now be seen under Projects section. 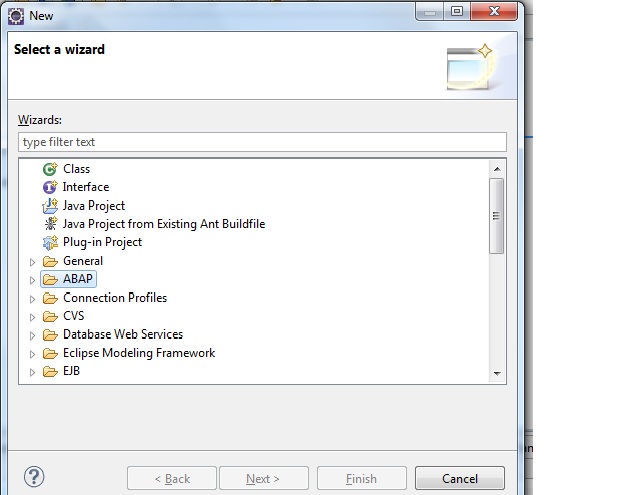 However, this is the front-end installation and if one’s system does not already have either AS ABAP of SAP NetWeaver 7.31/7.03 SP04, that needs to be installed. If you try working on any other version of Netweaver, there would be an error message saying ‘Backend is not compatible with ABAP in Eclipse’.

I downloaded AS 7.03 SP04 from the link provided in this doc. However, now I see that it has been made unavailable due to license issues and would be restored soon. Downloading this file took few hours.

Once the file was downloaded, the pre-requisites for getting this installed needs to be verified as:

The only thing I had to upgrade in my system was to Windows 7 64 bit Professional which was 32 bit.

Once the Operating system was upgraded, the installation of AS ABAP was done by a Basis administrator (BA). The downloaded file provided installation procedure which smoothly guides through the process. While installing AS ABAP one has to be sure that the system has administrator privileges. This installation could consume the whole working day, as it did for me.

Once this is done, an additional system connection would be added to the existing SAP logon pad. It would have a user id and password to login and would be suggested by BA. However, for the trial version user id would be BCUSER and the password would be suggested by BA. I faced some issues regarding developer keys but it was due to the fact that I was using wrong access key. This had to be correctly read from the installation guides provided. In addition the backend preparation like assignment of roles/authorization could be done in close discussion with BA and is also as given in this document .

After doing this and starting with the eclipse, in the prompt for adding a system, the same system connection as added above needs to be mentioned. I did face an error as highlighted here and the solution is also proposed at the same place.

I have experience of working on eclipse with Java and hence there could not be any instant great moments to be shared on developing the first program on eclipse. I may be able to share more feedback as I dig in deeper. For developers, not having exposure to eclipse, would first need to understand the IDE and would then be able to navigate easily.

Thanks for explaining the installation steps in detail. 🙂

You was lucky to have AS ABAP 7.03/7.31 SPS04 downloaded In my case I have tried to download that many times (its more than 10 times) but download has always failed due to some unknown reason 🙁 and now its not there due to some licencing issues.

Hope it get restored soon.

Thanks for the quick comments.

That's right, the link to download SAP AS 7.03 SP4 has been made disabled since quite a few days now. Probably Christopher Kaestner  Thomas Fiedler could give us some idea as to when will that be restored! Thanks.

I think you should mention the much easier way to get the latest tools: Via the new SAP Development Tools for Eclipse update site at https://tools.hana.ondemand.com/.

Thanks Gregor. The link highlighted by you is present in the introduction part of this document. However, I just noticed that it got hyperlinked with 'Eclipse Juno' and not 'Updated version'. Would correct that right away. Thanks for the feedback.

I would require some help here. I used the same approach as highlighted in

https://tools.hana.ondemand.com/. The problem when I install the ADT for Netweaver is that it errors out with messages. I will include the messages shortly.

Here are the errors that I get - Cannot complete the install because one or more required items could not be found.

Have you checked the easy install files provided at http://wiki.sdn.sap.com/wiki/display/ABAP/AiE+easy+installation?