I was fortunate enough to be invited to participate in the Bloggers Program at SAPPHIRENOW in Orlando last week.

One of the more interesting announcements (at least for me) was “SAP Fiori” which was demonstrated during Vishal Sikka’s Thursday keynote by Sam Yen. Vishal spent some time explaining that “Fiori” means “flowers” in italian and why that name was chosen. The Fiori apps were also being demonstrated on the show floor and are available now.

Sam Yen has the job of “changing the perception of usability at SAP”. Not a trivial task. You can refer to my blog about this from SAP TechEd season last year. http://scn.sap.com/community/ui-technology/blog/2012/12/19/changing-perception-of-usability-at-sap

Part of Sam’s strategy is to identify the most common SAP transactions used across the SAP customer base and “renew” them. When I was talking with Sam last year he suggested that this would be around 20-50 scenarios. The initial release of Fiori apps number 25. 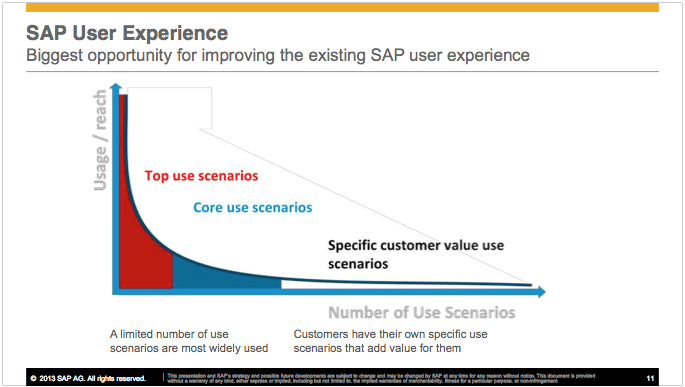 All this is good news for SAP customers. Let’s face it – any initiative to get the SAP delivered user experience closer to what the end-users desire is to be applauded. Fiori apps are built using the SAP UI5 framework on the front end which calls backend functionality that is exposed using NetWeaver Gateway services. This should mean that Fiori apps can be ported to any version of ECC 6 – and potentially even further back. I look forward to hearing how easy this is in reality. (*Important – SUP – now known as the SAP Mobile Platform – is not required.) 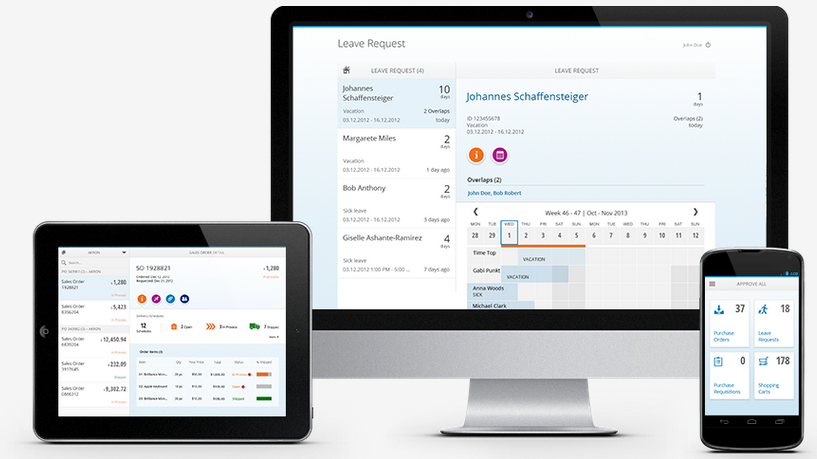 If nothing else the Fiori apps are a good demonstration of how to build web applications from both an architectural and user experience perspective. The clear separation of user experience and backend functionality is a principle that all architects and developers should have grasped by now. The screens are simple and in many ways quite minimalist. Most liked them and even the worst criticism I heard was pretty subjective. The responsive design seemed quite good although I didn’t get a real chance to try it out on a smartphone to see how usable it was on that form factor was.

The bundle of 25 Fiori apps are priced at 100 Euro per user. There are plenty of people who believe they should be free and there was a robust twitter discussion about this. I also had many people seek my opinion on this aspect both directly and indirectly. Personally I believe that they should be free but I am not militant about it. SAP could use the goodwill that such a move would provide and I think that it would reinforce the message that fixing the user experience is SAP’s problem not their customers’. But I also understand the argument that by putting Fiori on the price list the SAP field sales force will be motivated to position it within every customer. The continuation of this argument is that it will increase visibility of the Fiori apps within the customer base and therefore adoption. Time will tell I guess.

What I am sure about is that the availability of NetWeaver Gateway for all SAP customers without additional licensing costs greatly simplifies the Fiori licensing discussion. So if nothing else SAP can be happy that the change in pricing policy for Gateway helps simplify the Fiori pricing discussion. 🙂 (Ref: http://scn.sap.com/community/netweaver-gateway/blog/2011/10/17/thoughts-on-netweaver-gateway#comment-333317 )

On the exhibition floor I was incorrectly advised that if additional apps are added to the Fiori bundle they would be covered in the license cost. This didn’t sound right to me so I tested this with Sam Yen and he confirmed that wasn’t correct. The problem here is that if more apps are “renewed”, as indicated in the roadmap slide, then SAP will have their hand out again for more Euros. This would not be a good look. SAP need to sort this out quickly. Of course I needn’t point out that this problem goes away if Fiori apps are free.

Another source of confusion came from a SAP source that asserted Fiori apps were targeting so-called “occasional users”. This flies in the face of every message we have received since this initiative was started last year. On the Fiori overview page it clearly states that they are “for broadly and frequently used SAP software functions” – pretty plain to me. I understand that sometimes people get the messaging wrong but the people that were responsible for this snafu did themselves no favours at all.

As to the Fiori apps themselves, they are catalogued as Manager Apps, Employee Apps, Sales Rep Apps and Purchasing Agent Apps. They include…

The first thing that occurs to me is that there is significant overlap with existing web/mobile solutions that SAP provide. I wonder how SAP will position the Fiori Employee Apps against Employee Self-Service? Between the Manager and Employee Fiori Apps a significant proportion of what is currently in  ESS/MSS is covered. And every SAP Mobile pitch I have seen puts plenty of focus on workflow approval apps. There seems to be a school of thought that workflow approval is the mobile “killer app” – something I strongly disagree with.

As for the apps themselves they look pretty good. We all have different tastes so they won’t be for everyone but the good news is that there is a theme builder that allows you to change their appearance to suit yours. The apps all look and work consistently which is important so the users can figure out how to drive quickly.

SAP have recognised that many customers, maybe all customers, will need to modify at least some of the delivered apps to suit their particular needs. There is already documentation available that shows ways of doing this. In the future the Applications Designer tool has a part to play here but unfortunately this tool has been delayed and is not yet available.

So all in all I would have to say that the Fiori Apps are a good initiative. They look good, they are simple and easy to implement, and they are targeted at a clear need in the SAP community. I now wait to see how quickly and how widespread the adoption of these apps is. And returning to the roadmap slide I am reminded that the “renew” slice is targeted to grow over time. If SAP can come up with 25 apps in the 6 months since last SAP TechEd season can we expect another 25 for the next SAP TechEd? I hope so.