SAP PI and Integration round up of SAPPHIRENOW

I’m on the plane back from Orlando, where I the last week have attended the ASUG and SAPPHIRENOW event. I thought that I wanted to share some of the idea and inspiration that I have received while I was on ground. This will focus mostly on the SAP Process Integration and integration that I’m working with. I think there are many other people showing what they have experienced in other areas.

For SAP PI I did go the influence session with Udo Paltzer, to get briefed on the status and what was going on. There was not a lot of other session going on around SAP PI, probably not because SAPPHIRENOW is more focus on the business value.

Udo had done a roadmap session for the IFG (International Focus Group for SAP PI). I cannot find the replay, if you know where it is then let me know. I’ll not cover them here, mostly because there was not a new feature that I could fall in love with.

SP 7 for SAP PI 7.31 is now available and SP 8 will come 1/8. They will add new functionality to enhance the functionality in the SPs and of cause fix bugs.

A feature that is being added with SP 7 is a wizard to migrate from the Dual stack objects to integrated objects. It is a nice feature that will make it easier to migrate objects. You will still have to make sure that channels are configured correctly if you are moving from ABAP to JAVA based adapters. It will save some time but it will still be a time consuming project.

Around the move to from ccBPM to BPMN and the single stack. You would still have to migrate all ccBPMs manually. So it will require a lot of testing and development. Udo mentioned just to leave the dual stack running and then get a new single stack for future development. I don’t see this as ideal because it doubles the cost of running the servers, because you would have two set of servers to maintain. It would probably be a good idea to get something up and run on the single PO stack. Then start the migration away from the dual stack to the single stack, it will still cost a migration project. That can be quite expensive. The development time will not be huge, but the testing part will require resources.

Udo was looking for customers who wanted to talk about what they experiences with the PO or with B2B tool. So if you want to present at Teched do sent him an email.

The Netweaver 7.4 is being released. This is similar to Netweaver 7.3.1 at least for the PI/PO part. The portal needed some new codeline and that is the reason while the new version has been created. The service packs for both versions will be released around the same time form the current release schedule. I guess that this was just as with XI 3.0 and PI 7.0, which was also identical form a XI/PI perspective.

One of the things that I wanted to learn more about was the SAP HANA Cloud Integration (HCI probably not an official abbreviation). What it was and how it will impact SAP PI.

The short answer is:

In the short term it does not have any impact on the strategy. There will still be a need for on-premise SAP PI to solve the current use cases.

Currently HCI only supports scenarios from local systems to SAP’s cloud offerings. Some packaged already exists and they are developing more to support all use-cases they see as relevant. The license for using them is based on a percentage of the cost of the cloud solution.

Later the solution would be open to allow others to use and enhance the solution. This will enable partner specific solutions. Where you can create an any-to-any connection. You will need to open the firewall to be able to access systems behind the firewall or probably have a VPN connection. My understanding was at this would be possible around the end of the year.

The development objects and mapping will look the same. So objects can be moved between the two systems. It will probably be using the Eclipse based tooling from NWDS. The runtime would be a bit different since it will run in the cloud and on a Sybase database. When it will run on HANA is unclear and probably does not matter since it will not give a lot of performance improvements.

The BPMN package is not schedule for inclusion at the moment. Licensing was not clear either. I was hoping that it could be a good hosted solution to make some of the integration instead of having to buy and manage a SAP PI system. It could be useful for some of my small clients.

I had expected that this write up would be rather short but it looks like I did get to cover some different areas.

One great thing about the trip was that I was able to go see an Atlas V rocket launch on the Wednesday. It is the first time I get to see such a rocket go up. It was a small rocket but it made a great noise and defiantly worth seeing if you are in the area. 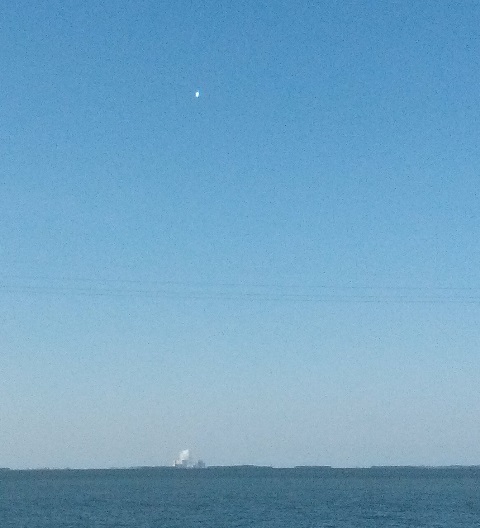 This is my image of the launch, i guess that you need to be using a bigger camera and not just my mobilephone to take better pictures at the distance. One of the people I was standing besides got this images form the same difference http://drh68.zenfolio.com/p275028033

Disclaimer: I’m writing this on my own and it is based on my impressions. I can have misinterpreted things or be unable to formulate it correct.

I am glad you attended the conference and I may openly borrow your last sentence on many things in the future.

I hope to see you again at TechEd.

Thanks I knew there was something that I needed to add. Now updated with a launch image.

Please do borrow the last sentence.

thanks Daniel for sharing your experience.