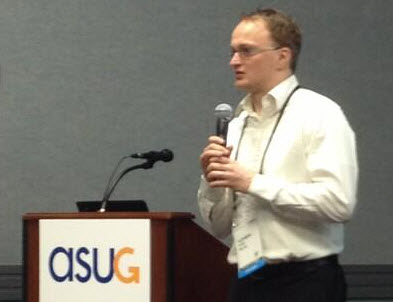 We also learned that the broadcasting feature will come to Analysis Office through a BI4.1 feature pack later this year.  The planned release for Analysis Office 1.4 is early June.

Right after this session there was an ASUG Community Lounge session titled “BEx Quo Vadis” or “BEx where are you going”.  We had a similar community lounge at last year’s conference but no one showed up.  I was quite skeptical about doing it again, but Lee Lewis insisted and fortunately Joyce Butler and SAP’s Eric Schemer agreed to do it.

We had a great turnout this year, and special thanks goes to Lee, Joyce and Amy Finke of ASUG Headquarters.  Amy redesigned the lounge areas, which were called “theatres”, which was a huge improvement.

Oftentimes people hear that “BEx is going away” – this is not the case for the BEx Query Designer.

An attendee asked “what are the gaps between Analysis Office and BEx Workbooks?”  Alex said he felt document integration and broadcasting were still two missing features.

Here is a link to a vine video where Alex discusses Analysis Office.  Also Jie Deng answered questions about placing Design Studio applications on the Enterprise Portal (minimum version required is 7.3) – here is the link to the vine video.

Thanks to all who attended and thanks to SAP’s Alex Peter, Jie Deng and Ian McAlpine for their support of ASUG.

What did Alex mean by "document integration" as one of the missing features?

Check out this SCN wiki that explains document integration and work-arounds with BI4: