Objective: Provides a brief introduction to REST services in general and explains the basic usage of the ABAP REST library (SAP_BASIS 7.40) in particular.

Applies to: SAP NetWeaver AS ABAP since 7.00. The SAP documentation for REST is available in AS ABAP 7.40.

This blog post gives a short introduction to the new ABAP library for REST based services, which is part of ABAP 7.4. In particular in combination with the new JSON support in ABAP 7.4, it can be used writing native HTTP services directly on top of the Internet Communication Framework (ICF) following a RESTful design.

The REST library is used as a central component in the following frameworks:

It should be stressed that the REST library is a technical library and does not provide a programming, configuration or operations model on top of the ICF.

For productive business scenarios SAP recommends to use the SAP NetWeaver Gateway which provides all qualities for REST services based on the OData standard.

REST is an acronym for Representational State Transfer and stands for a programming paradigm for Web applications. The REST architectural style was first introduced by Roy Fielding (Link).

The central principle of REST services is the existence of resources each of them referenced with a unique resource identifier (URI). The reading and manipulation of these resources is based on a standardized interface which is the HTTP protocol. Via the HTTP protocol, client and servers exchange and transfer representations of resources, i.e. documents conveying the information of a resource.

When to use it?

There is a lot of information available in the Web about that question (and the alternatives to REST, e.g. SOAP based Web Services), so only some main indicators should be mentioned here:

The ABAP REST library specific classes are located in package SREST and its subpackages (SREST_CORE, SREST_EXT, SREST_HTTP, SREST_TEST, SREST_UTIL). If you want to use the ABAP REST library, you have to declare an access usage for the corresponding package interface. Using the ABAP REST library, the focus in this blog is on developing REST services in the context of the HTTP protocol, i.e. the URI schema is http or https, the authority identifies an ABAP application server, the SAP web dispatcher or some network intermediate (e.g. reverse proxy, which is set up to forward a request to an ABAP application server). The path consists of the base path (defined in the ABAP Internet Communication Framework (ICF) for a REST service’s handler class) and the resource path, used by a REST application service to identify the requested resource.

This picture gives a rough overview on the control flow when processing a REST request within an ABAP application server.

These are the 3 main processing steps (see picture above):

Used interfaces and classes of an ABAP REST service implementation:

All interfaces and classes, their usage and background information is available via SAP help (SAP Basis Release 7.40).

Especially the REST Programming Tutorial is of interest for people to have a first hand on ABAP REST programming.

This picture shows the sequence of class usage on the REST server side: 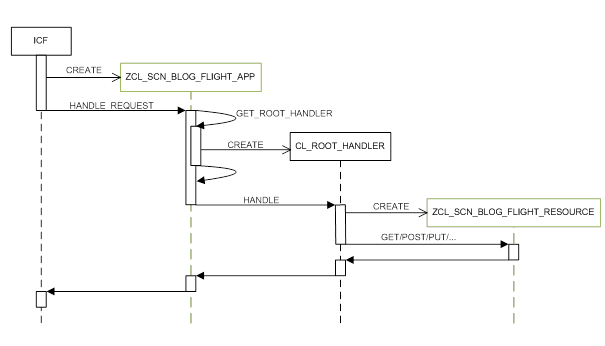 The REST example used in this blog is using parts of the well-known SAP Flight sample data model. In this example, the resources are “flight” resources made available to REST clients stored in the database table SFLIGHT.

The REST application class named ZCL_SCN_BLOG_FLIGHT_APP is dervied from the ABAP library class CL_REST_HTTP_HANDLER. This REST service class inherits especially the interface method IF_REST_APPLICATION~GET_ROOT_HANDLER. Within this method, at least one URI template gets attached to a REST handler class (multiple attachments are possible depending on the number of supported URIs and used classes). The handler class is named ZCL_SCN_BLOG_FLIGHT_RESOURCE in this example (for its implementation see below).

This is the implementation of method IF_REST_APPLICATION~GET_ROOT_HANDLER in the REST application class ZCL_REST_FLIGHT_APPL:

In this code example, multiple URL templates are attached to one and the same resource class ZCL_SCN_BLOG_FLIGHT_RESOURCE (which is not mandatory). For the details on the definition on URI templates, you may refer to the SAP documentation. In this blog only an example is given for the routing.

This is the implementation of method IF_REST_RESOURCE~GET in class ZCL_SCN_BLOG_FLIGHT_RESOURCE:

Brief description of the implementation:

This is the implementation of method IF_REST_RESOURCE~OPTIONS in class ZCL_SCN_BLOG_FLIGHT_RESOURCE:

Brief description of the implementation:

Beside the basic functionality of a REST service mentioned above, there are additional features integrated into the ABAP REST library (which are only mentioned in this blog without detailed explanation (for more in depth information refer to the SAP documentation):

Having used the Alternative Dispatch Layer by DJ Adams for some years now I am happy to see - after the SAPification of ZJSON - that yet another important connectivity framework is out-of-the-box available! Great job!

Thanks for this great introduction to the REST framework!

Hi Otto, thanks for this tutorial.

I am setting up a REST service (in a 7.4 system) in the manner you describe, by creating a node in ICF under /SAP/BC/RESOURCE and attaching a handler to to the node which inherits from class CL_REST_HTTP_HANDLER.

However, the handler expects a CSRF token as a header field for create/update methods - this token can according to documentation be obtained  via a preceding GET request with the value "fetch" for the CSRF header. The problem is that it seems that the GET must supply some kind of authentication in order to obtain the CSRF token - reading the code it says "no public services allowed". Authentication via password/user on the service ("Service Logon Procedure") is not accepted.

Is there a recommneded way of either obtaining the token for a public service, or turning off the CSRF validation alltogether?

as you already noticed, it is mandatory to have a none public service to get a CSRF token generated. This is hard coded in the CSRF token genrator called by the HTTP REST handler. There is no way in the OData or REST environment to switch this behaviour off.

So that means, to be able to use the REST service as described above, the client will actually need to authenticate itself somehow? That seems like a severe restriction.

Is there some way to set up a public REST service (not requiring authentication) using SAP classes, or must one simply create an entirely custom handler for this?

You need a CSRF token only if your service does changes. For read operations (GET, HEAD, OPTIONS), there is no need for a CSRF token!

Understood - I was hoping to allow anonymous POSTs, just using my own generated session ID for authentication. It seems I will either have to create my own handler class or alternatively copy and modify CL_REST_HTTP_HANDLER to accomplish this.

in order to get rid of CSRF you can just:

all your custom handlers should extend this z class and you will be fine.

Is there any other way to make CSRF validation work correctly? I receive a token, but the validation (method IF_HTTP_SERVER~VALIDATE_XSRF_TOKEN) always fails...

Are you sending the token you received back in the header of your requests?

Yes, I get a token with a GET fetch and return it with my PUT request. Looks like the server has a different idea which session token should be valid?! I will try to figure this out, maybe I'm still missing something here 😕

Seems to be a client problem... testing with RESTClient in Firefox works correctly.

I must be missing something in my node.js code.

Ok, it turned out that it is crucial to not only pass the CSRF token, but the session cookies as well. Works now as expected with node, unirest and Q 😎

The requested content type should also be determined via "Content Negotiation" (I know, many REST APIs are using the "format" style,...), see

Can I install this ABAP Rest Library in BASIS 7.01?

If you have the GW_CORE component, please check the package /IWCOR/SREST.

Great blog, Kudos to you!

When we have both the REST and ODATA available to create an API in our SAP system, which one to choose from. Can you please provide any best practice or guidelines on when to use REST and when to use ODATA.

got an automatic notice about your question. Well, this blog is over 9 years old and I do not work in the ABAP team any more. So I am not sure, if I am a good contact for your questions or if it is better to contact e.b. the ABAP Gateway team.

From the top of my head, if you need features listed in the OData specification, you should go for implementing an OData service (version 4.x preferred), which is also a REST service. If these features are not required, because it is a simple and small service you are heading for, you may go for a "custom" REST service as I described it long ago in this blog.

I even cannot answer, if everything is still the way it is described in this blog. You may also go for an ABAP Gateway service, also preferred using the V4 version there.