Sustainability is Key to Saving the Environment – and Businesses 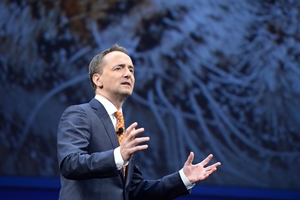 SAP’s SAPPHIRE NOW conference continued in full force on Wednesday as co-CEO Jim Hagemann Snabe hailed sustainability as a driving force for the company’s latest technological innovations to thousands of people watching live in Orlando as well as online around the world.

Beginning his speech with rhetoric reminiscent of a passionate biology professor, Snabe presented the story of Charles Darwin. From Darwin’s various studies of nature, he was able to develop the theory of natural selection – a theory, according to Snabe, that also applies to businesses. “Wasn’t Charles Darwin describing the rules of business?” he asked. “In the natural environment, radical change means extinction. Some species die out but the ones who survive are the ones who adapt.”

Snabe went on to say that the business climate changes as forcefully as nature, and companies must update or be left behind. “We live in an era where slow kills companies fast,” he said, borrowing a line from SAP Executive Board member and SuccessFactors CEO Lars Dalgaard, who was unable to join the SAPPHIRE conference this week.

Today’s world is also going through a time of dramatic change, Snabe said. Seven billion people are consuming more and resources are becoming scarce, he pointed out, citing the famous environmental impact equation, I = P x A x T. SAP’s innovations could potentially optimize not just technology and people productivity, but resource productivity as well.

For example, Snabe mentioned technology for a “connected car,” which could help people avoid traffic, find parking spaces, and potentially save millions of dollars in gas, time and money. There are also innovations for smart electricity grids that harness energy from the sun, as Snabe noted the Earth receives 10 times more energy than humans use every day. This will ultimately make fossil fuels a thing of the past. “The cheapest ton of coal is the one you never use,” he said.

Lastly, Snabe was joined on stage by McLaren Automotive executive chairman Ron Dennis, who explained to the audience how SAP’s real-time data analysis technology, HANA, is helping his company compete in Formula 1 races. They are also developing a new car that has 1000 horse power while only emitting 200 grams of carbon dioxide.

“You talk about Darwin,” Dennis said to Snabe. “These [kind of] individuals change the world. If HANA was a person, she would go down in history as changing the world.”

Indeed, Darwin’s contributions to biology changed the world, but they also changed the culture of business, where the “survival of the fittest” dogma still holds strong. SAP’s latest data-analyzing and cloud software solutions are already strengthening how many companies operate their day-to-day business. Those that aren’t on board are likely to become extinct.