The Sapphire discount for Lumira this week encouraged me to download a copy and give it a go. This is the desktop version, not the cloud version, and was previously called SAP Visual Intelligence. In fact, it still is – the rebranding hasn’t made it to the software itself yet. I bought the personal edition rather than the Standard edition, and so I’m restricted to analysing data from local spreadsheet files.

Downloading was quick and easy, so before long I was left with deciding what data to feed to it to give it a little exercise. Most people seem to use financial data of some sort, so just for a change I reached for the Service Management data in our ERP6 system. Specifically I took lists of service notifications from IW59, service orders from IW73 and functional locations from IH11, merged them together into a single data source, added some calculated fields and then started producing visualistions. My data source has data for 2011, 2012 and 2013 so far, for a total of 120k rows. Manipulating the visualisations is fast enough with this volume of data, although opening and closing the files takes a while. I should say that my machine is a MacBook and that therefore I have Lumira running in a Windows virtual machine in VirtualBox, which may impact the performance somewhat. In general, though, it is pretty usable. We’ll see how it scales when I add more years of data to the data set.

Here are a couple of charts I produced to answer questions that I know our Estate Management people ask regularly. First – which building on campus do we spend the most money on? A heat map answers that nicely. 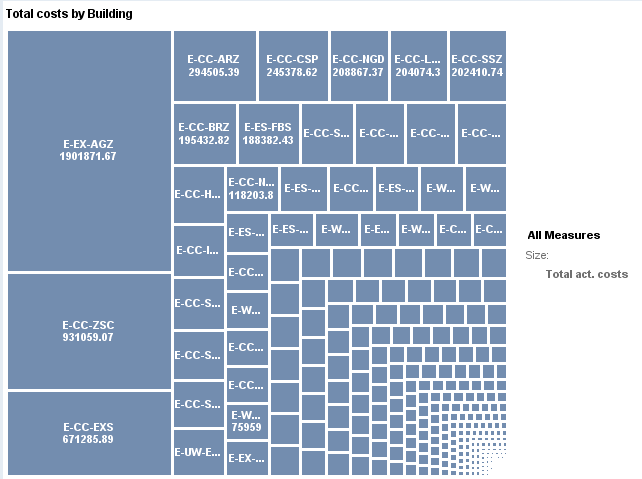 Or maybe we want to know how maintenance activity varies across the year? How about this? Notice the big peaks of spend in July when we do most of our major refurbishments? Notice the peaks in notification count (fault reports in effect) in January every year? Not sure what the cause of that is – I must ask our maintenance guys! 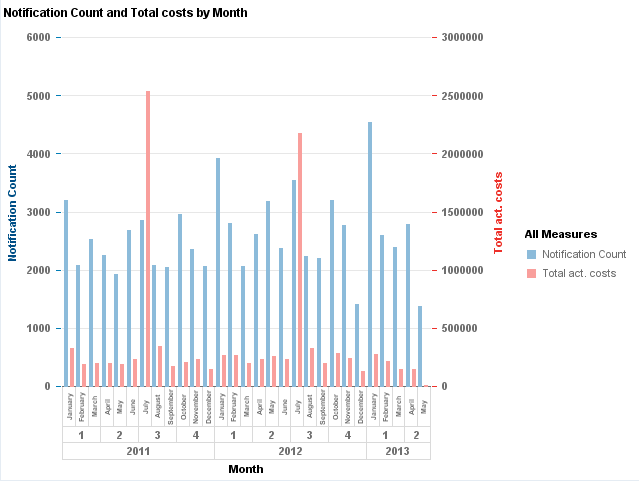 It took very little time to do this and there are lots more analyses on my list to try next – response time analysis, analysis by trade, reactive v planned maintenance activity, and so on. All of these would be just as easy to produce. I can see this tool being very useful in many parts of our organisation, financial and non-financial.

Just installed the SAP Lumira Cloud version myself and I agree with the fact the everything is still called SAP Visual Intelligence in the software ... Marketing is indeed faster than development or maybe development is waiting for the next rebranding 😉

I think it should be noted that SAP Lumira has some serious restrictions in terms of OS:

We heard at Sapphire that the product will be re-branded in the next version 1.0.11.