Here comes the revolutionary tool from SAP that can migrate all your dual stack ID objects to Java only ICO objects. Yes, really a true hassle free business converting the dual stack configuration objects to java only objects.

In order to access the tool, PI instance has to be SSL enabled in the first place.

Secondly, the user should have the roles SAP_XI_API_DISPLAY_J2EE, SAP_XI_API_DEVELOP_J2EE in source and target system respectively.

Once it is SSL enabled, access the tool using the URL https://<host>:<port>/webdynpro/resources/sap.com/tc~pi~tools~dirmig~wd/DirectoryCockpit

You end up arriving at the below screen.

This is basically used to migrate all the objects that correspond to a complete Configuration Scenario.

This is used to configure the Systems that are used in the integration and the Renaming rules that you want to use to rename the objects like Communication Channels, Business Components, Party and Routing Expressions etc.

Used for migrating the communication channels.

Let’s how the migration is being done in each of the above cases.

Once you enter Scenario Migration, you will get the below screen in which you find the corresponding steps to be carried out. After providing the details, you move on to Scenario Selection where you need to select a Sender Agreement / Receiver Agreement (individually or all that exist in a particular configuration scenario). After migration, the respective IDOC AAE and the SOAP AAE will be created automatically.

Once you move on to the next option, Scenario Matcher, the tool validates whether all the involved objects can be migrated to an ICO in the target system.

And finally, Object Creation. This creates all the objects and will be associated to a change list. You can view this change list in the target system’s integration Directory and can activate the same.

Configuration Migration is used to configure the systems that can be used as the source systems (you can select the available systems or you can add manually) and also to create any renaming rules for renaming the objects like Communication channels, Business components, Party, and Routing expressions.

Renaming the business systems still depend on the transport targets that were defined in the SLD.

We go for this option when we want to migrate many channels from one system to another. 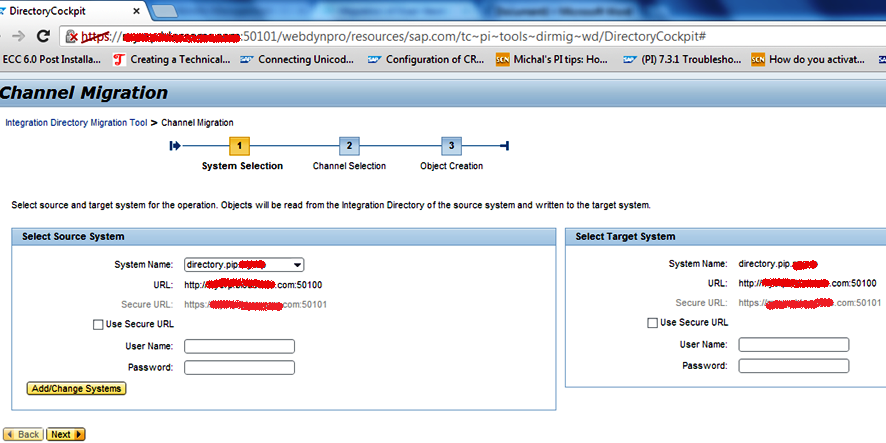 Populate the source and destination system details and move on to the next step.

Choose all the communication channels that you want to migrate. And click on Next.

Thanks for sharing, Anil.

SAP has already posted the same document a few months back

with a bit more details - any chance you could change your article to show maybe only non document things in the previous one ?

I dint notice this and I was very excited about the new feature of SP07 and hence I had created this blog. I think there is nothing much I can update on this front as the previous blog has already provided detailed info. But, I can add the reference of the SAP blog in mine.

Nice blog Anil..Let me tell u wat i got frm this blog...correct me if i'm wrong..

With the integrated configuration you specify the configuration settings in which the message from the Advanced Adapter Engine are to be processed.

In this case you can specify all configuration settings simply in one single object.

In case of ICo Integration Engine is not involved - all processing takes place in AAE.

Earlier SAP has mentioned that it won't work for scenarios those don't have sender agreement like idocs and XI adapter. but u have mentioned that we can work using receiver determination.

have you tried that also ? Is it working fine ?

And how we can deploy this tool and is there any connection required between 7.10 to 7.31 ??

Not necessary to go so complicated.

You should find the tool on your 7.4 system. You always run the tool on the target system for the migration. It should be available in all 7.4 SPs.

I recently did our migration from PI 7.11 to a new parallel system installed with PI 7.4 single stack. Just follow the link mentioned in the blog https://<host>:<port>/webdynpro/resources/sap.com/tc~pi~tools~dirmig~wd/DirectoryCockpit you'll be directed to Migration Tool Integration Directory page. For there move Communication channels 1st and then Configuration Scenario's.

Please provide document as we are going to migrate from SAP PI 7.31 to SAP PO

Thanks for sharing, Anil.it's  helpful to me