I recently received some very positive feedback from some customers using SAP Business ByDesign on a new concept I’ve been working on for our how-to demo videos. I wanted to show them what I believe is an interesting new way to present learning videos to our users. The problem I saw with our videos in past was that not only is the content admittedly not the most exciting to watch—they are learning videos, after all, and are meant to show users how to perform their daily tasks—but also the visual presentation and the language used to give the instructions was very dry. Everything in our new Cloud world is fresh and exciting, and to me, our how-to demos didn’t fit that image yet. 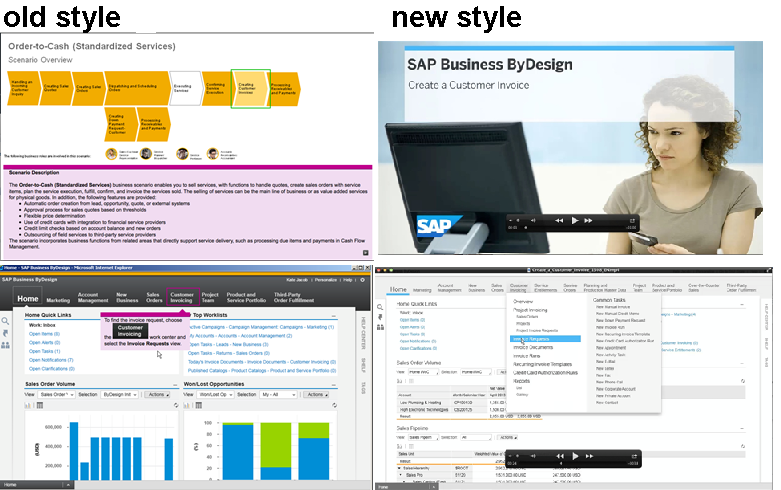 The first thing that had to be changed was the visual presentation of the demos. I started by utilizing a better HD video format and adding some of the great SAP branding elements prepared by our marketing team. I’m also now using full-screen recording to focus on the product without showing browser toolbars, and motion recording give a better feel for how our product actually works, rather than just a series of screenshots as we did in the past. I also removed the text from the screen, which was the exact same as what was being spoken.

But even with the better, more flowing presentation that came with the new visual style, I still had the feeling that I was sitting in grammar school when I watched our videos. We have so many people working hard to make our products great to use, it didn’t seem right to have the learning videos – perhaps the first stop for many new users – give such a cold and unfamiliar feeling. I wanted to give the users a feeling of familiarity, the same one they would have if their colleague were showing them how they work with the system.

To do that, I had to make sure that we were talking to the users in the same way their trusted colleague would talk to them. I’m a member of a great team that produces roughly 40 how-to videos in 6 languages-English, German, Chinese, French, Spanish, and Italian-and every one of those languages except English has formal and informal second-person personal pronouns (ways of saying you). While we knew it wouldn’t be appropriate to use informal language with our customers (in German: Du; in Spanish: tu; in Chinese 你; etc.), the formal form gives a polite but also unfamiliar feeling to everything you say.

To change that impression, we decided to turn the language around and instead of telling the user what to do, we bring the narrator into the video as the person performing the task by using first-person language. This style also makes it easier when writing the demo scripts to tell the user what they can, should, and must do without giving them the feeling that we’re telling them how to do their job.

As this is something very different from what we did in the past, I was eager to see how our customers would react to hearing the videos presented to them in this way. I was able to set up three separate virtual meetings (via SAP Connect) with customers to show them a pilot video I prepared. Going into the meeting, I was already convinced that this was a good direction to take our demos, and I was very pleased when all three interviews went similarly—they all LOVED the new video. I asked them especially how they felt about the language of the video, and all three said they think it fits perfectly to the style of video. One customer said he didn’t even notice that the narrator was speaking in first-person at first, but after watching the video again we agreed that was a positive experience.

Based on the overwhelmingly positive feedback not only from customers, but also from other members of our KM team, we’ve decided to revise the language of all of our how-to demos to be more people-friendly, more familiar, and more interesting to watch. To see an example of this style, see the video below, and for comparison, that same demo in the style we’ve used up till now: Create a Customer Invoice.

We’re working toward updating our how-to videos in SAP Business ByDesign in time for the August 2013 release.