ASUG 2013 Day One – Education boxed in by keynotes

After the morning keynote came the education sessions, followed by the afternoon keynotes, like night follows day.  I’ll let the “professional” bloggers opine about the one-person acts, and focus on the customer-driven content.  And a bit about the mobile agenda app, and the obligatory conference wifi supply complaints.

Figures A-1 and A-2 show the agenda app login, which, so far, has only need needed once today.  I’ve had one update since installing it last week, and I believe another one is pending (for 14-May-2013).  The Android store (OK, Google Play) shows 500+ downloads.  That doesn’t seem right with 10,000 attendees, but maybe so.  The odd thing about the login is when I rotate the screen, the text on the Help and Log in button squishes out of legibility.  The app generally seems to work best on portrait mode, but as I still cling to my clicky keyboard, I’d like to type in landscape.

Figure A-3 shows the show floor map.  This zooms in pretty well, I expect, though the comments I heard was the paper map in the conference hand-out was, well, handier.  I usually rely on the grid numbers, not to mention the banners most vendors fly as high as possible, to locate those I wish to find.  During the few minutes I managed to spend on the show floor, I’ve found about half the booths on my list.

Figure A-4 has the primary menu, with “my agenda” right on the top dead center where I’d want the most frequently use button to be.  In years past, I’d print a copy of my agenda for safety reasons, but this time I felt confident the app would keep my agenda (other than those off-the books sessions I still need to weave in) cozy and warm in my pocket.

Figure A-5 and A-6 show the next problem (after the login screen issue) – the vendors I had chosen to visit in the web-based agenda builder were not to be found.  My sessions were there, but not my other plans.  I put a list online, so I’ll need to refer to that somehow to avoid getting back to the office without having dotted my eyes.

The last problem was my own doing – I have 2 copies of the app, one from last year, and one from this year, on my phone.  Fortunately they’re easy to distinguish since 2012’s schedule had a Monday opening keynote, and 2013 started on a Tuesday.

It’s easy to complain about spotty wi-fi coverage, and I will, given this is the premiere event for one of the biggest software companies in the world.  To have no coverage, or dead zones, for education sessions, or for the show floor, should make the event producers cringe. I had weak signals on the second floor, better on the second, but as most of the sessions I needed attend were on the second floor, I was sunk most of the day. Cell coverage was also weak on the show floor, but I’ll lay that one on the cell carrier rather than the venue infrastructure.  Figure B-1 shows the apparent workaround instituted by the management – add an express lane that costs an extra $13 per day. Since I couldn’t justify that on my expense account, several times I resorted to my phone hot-spot, which, bizarrely, worked better than the phone service.

For variety, I’ll work backwards from the end of the day to the beginning.

Figure C-1 shows the sparsity of the crowd, compared to other sessions I moderated today.  Maybe being last didn’t help, maybe I didn’t publicize this enough, but here was a success story of the Sybase/SAP Unwired Platform, complete with multiple device compatibility, and real world examples.  The company manages national and international moves; they’ve got CRM and other SAP back-end components along with SAP Portal.  The mobile app, demoed via iPads, has a portion of the portal feature set, and is designed to make life easy for people in stressful travel situations.  What you want is a simple app, fool-proof, with easy help access.  Their next phase is to incorporate expense management.

Yoram and Nir spoke about SAP capacity to deliver “cookie cutter” mobile app deployments.  Though I drifted in and out of the room for other issues, the thrust is to standardize the deployment scenarios, testing and refining the instructions and guidance to eliminate the variance from customizations.  Makes sense, generally, though their talk provided me with some quotable moments.

I’d probably rephrase the latter statement as “it doesn’t end”, given “it never ends” implies a Sisyphean effort we’d like to avoid.

The most astonishing part of the presentation (unless you count a slide that spanned personal devices from the TRS-80 to Androids) was a series of 16+ MB spreadsheets that chart project management details.

Jens and I decided nearly after the fact that this session title could have used a little punching up.  It does explain what the content would include, and the only thing missing was the “H” word.  Thank goodness.

Jens had a concise presentation, covering what might belong in a “cloud” environment, the direction SAP development is taking, and ways of moving from current or older releases to newer ones.  Good questions from the audience, and a few teasers to be answered in a Thursday session (3PM), but maybe a but skimpy on Q&A time.

We picked this session because we know forms are not going away, Adobe predominates in that space (how many apps do you have that can generate PDF?), and reading and writing forms beats taking orders manually, deciphering faxes, or a multitude of other I/O channels.  I’d say the session was a bit dry, not surprising given the subject matter, but the crowd size was good and people mainly stayed to the end.  Lots of good questions, and not too many three-letter-acronyms.  Some, but not too bad.

Figure C-4 shows one of the more humorous slides of the day.  While a few members in the audience dragged out their cell phones and tried to run the QR code into their bar-code reader, I took an image instead.  Despite a bit of parallax, skewing from the angle, and just popping the image on the screen, my phone can actually decipher the contents from this blog post.  Nicely one.  I didn’t click on the link though.  Maybe someone more adventurous can give it a shot?

Figure C-6 shows a piece of HANA hardware, the only one I found lit and working, in several hardware partner visits.

Figure C-6 shows two of our hard-working ASUG headquarters team, Joe and Kaela.  Kaela is the BITI team contact, for which she deserves a medal. Or badgification.

Wednesday and Thursday at 5:30 PM the SAP Mentors end-of-day wrap ups will happen at the ASUG Lounge Theater 2, on the show floor.  Don’t miss it. 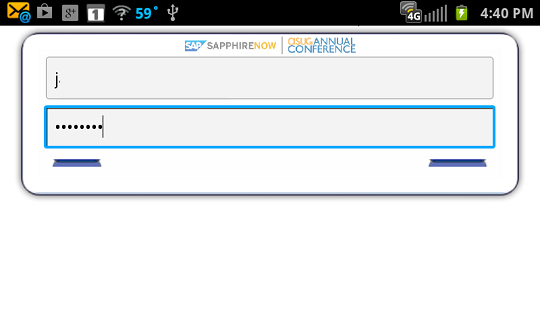 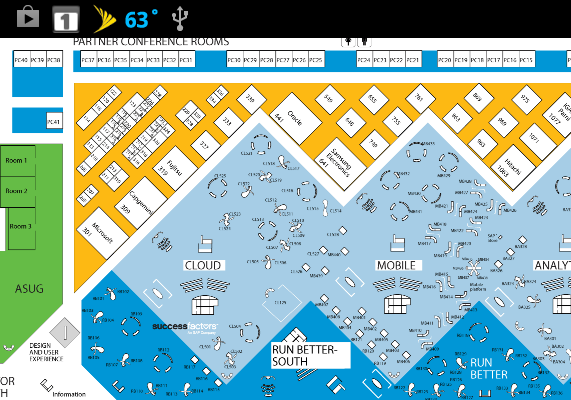 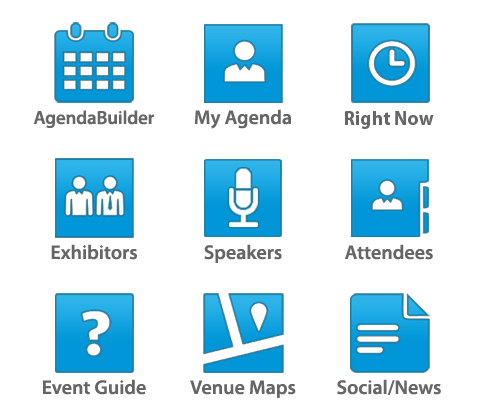 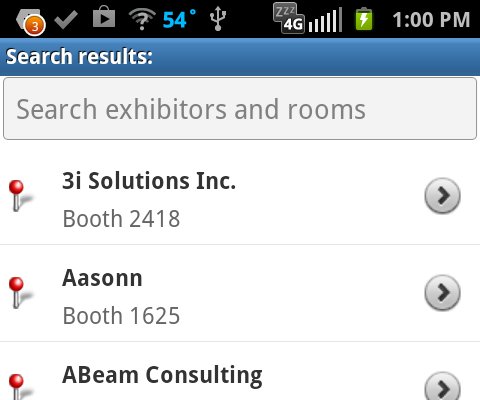 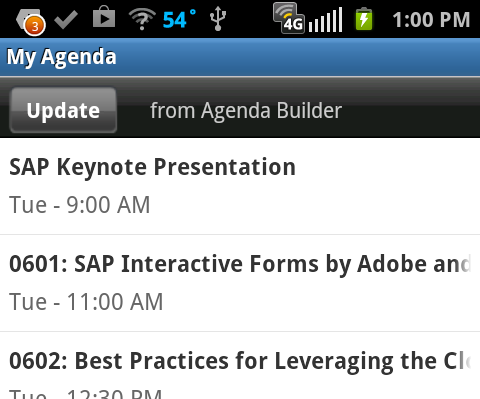 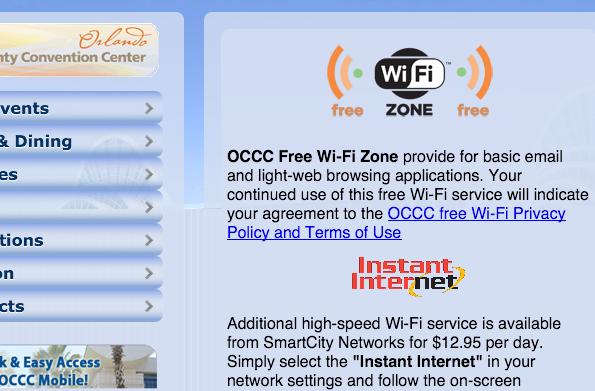 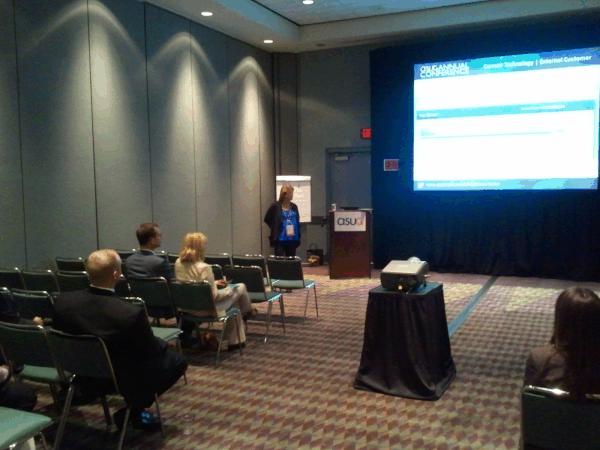 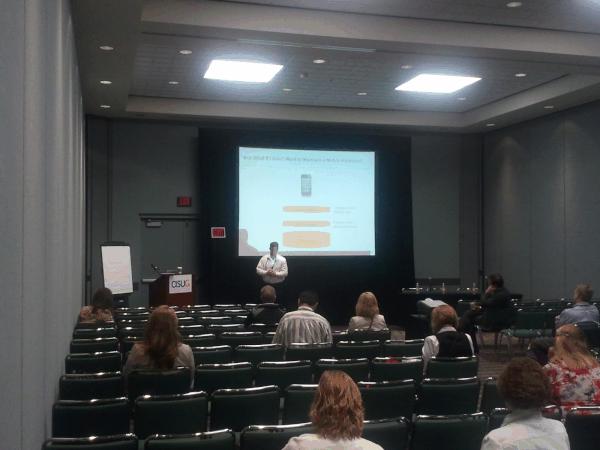 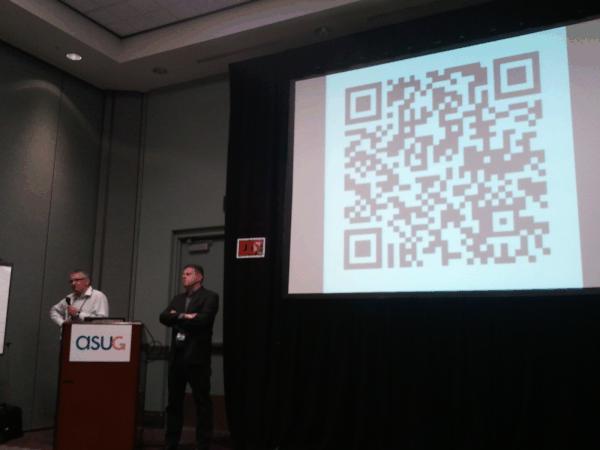 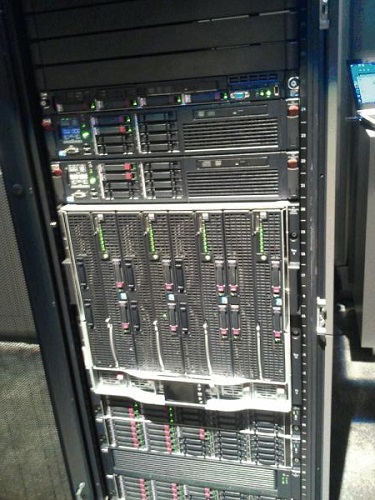 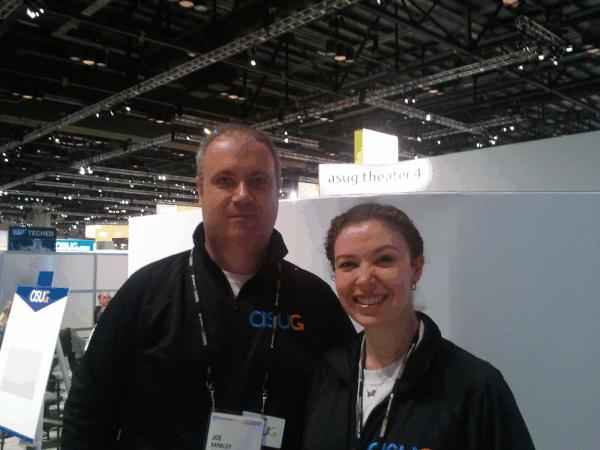