Behind the Scenes at SAPPHIRE NOW

How do you feed 12,500 people over three days? That’s one of many logistical problems that SAP and its partners will solve in Orlando from Tuesday to Thursday at its annual conference, SAPPHIRE NOW.

It’s such a big event that SAP started preparing the Orange County Convention Center on April 1. The company plans to host more than 20,000 attendees, up 7 percent from last year. And there will be 242 exhibiting partners, as well as more than 80,000 online participants.

“I do a lot of shows, but I love working for SAP,” said Cheryl Overend of Laguna Hills, Calif.-based plantscaper Overend Designs. “Everything has to be perfect … and they want the very best.”

Overend flies to Orlando every year to provide arrangements for the entire venue, including exhibitor booths, meeting rooms and coffee tables. Her floral arsenal included:

Many of the flowers Overend uses are local. But her 200 forsythia stems are from Michigan, where the weather is colder and the flowers bloom at the right time of year for SAPPHIRE NOW.

Overend and her team of designers — flown in from around the U.S. — work throughout SAPPHIRE NOW to control for conditions inside the OCCC. That includes changing some flowers mid-conference.

“We check them constantly,” Overend said while deftly trimming a calla lily Monday. “It’s very important that they look as good on the last day as they did on the first.”

Cannatella prepares trade show venues for The Freeman Company, a Dallas-based exhibit designer. He is in charge of laying “miles and miles” of power cords, audio and Internet cables, as well as all of the carpet and padding.

And there is a lot of carpet, according to SAP CMO Jonathan Becher’s latest blog post. More than 12 miles (22 kilometers) of it covers the exhibit hall’s floor, which is about the size of 16 American football fields or 20 FIFA regulation football fields.

With less than 24 hours to go before SAPPHIRE NOW opened, Freeman’s Cannatella didn’t get a lot of time to talk. Questions for him kept squawking from his radio, each time briefly drowning out the beeps of forklifts backing up and the hums of utility carts driving by.

A utility cart is what SAP’s Mark Yolton used during his video tour of the massive SAPPHIRE NOW exhibition hall on Monday. Bicycles and Segways were also popular modes of transportation for people preparing the OCCC for Tuesday.

There are about 5,100 chairs at the Keynote Hall. But that won’t be enough to seat everyone who wants to see big-name speeches, such as SAP Co-CEO Bill McDermott’s keynote presentation on Tuesday.

So attendees will be able to watch the presentations from Forum Theaters around the event floor. Click here to find out how you can participate online.

And in case you’re still wondering, SAP’s caterer, Centerplate, will feed conference attendees, staff and exhibitors on 718 tables with 10 chairs each. And that’s just in the lunch area. There are also refreshment booths scattered around the venue.

Tim Clark and Julia Busalt contributed to this report. 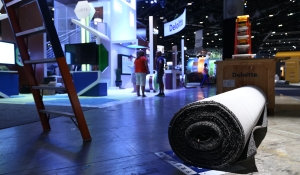 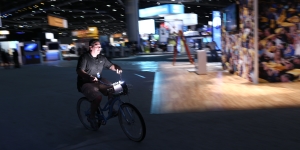 Insightful blog on the logistics behind the massive SAPPHIRE NOW conference!

Thank you, Mark! Isn't it amazing how much different the trade show floor looks today?