When I asked Doug Hay on Monday if he knew who Will Rogers was, he said “cowboy.”  That’s close enough, I guess, but after studying Will’s life, and writings, a bit, I understand he was a lot more than that. As a world traveler and journalist, he chronicled many contemporary events in the early 20th century with an astuteness that would put many modern-day bloggers and tech writers to shame. His output was prolific, writing in daily and weekly periodicals.  I have links at the end of this post for those who want to find out more.  Before I left town for the ASUG Annual Conference (known to many as “SapphireNow”), I reread some of Will’s writings.  A section about “conferences” jumped out at me.

Will was talking about international peace (or disarmament) conferences during the period between World Was I and World War II, though I’d say this perspective can be applied to any large gathering, including political rallies, revivals, and IT gatherings.  It’s always rubbed me the wrong way that some people expect world-shattering news to come out of a scheduled and pre-packaged event.  I’ve sat through many keynotes, only to go back to my cubicle, puzzling what the rhetoric had to do with the business at hand.

This article appeared, as far as I can tell, in The Milwaukee Journal  on Nov 15, 1931 (though I have another source that spots it on November 8th).  I’ve clipped a section available from Google, under “fair use”, and believe this content to be quotable for literary purposes. 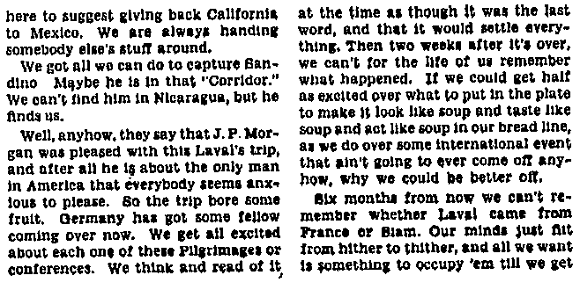 In the printed material I have at home, the quote ends “can’t for the life of us remember what happened.” In the original article shown here, Will goes on to put a hard-eyed perspective on lofty talk, focusing on bread lines and basic nutrition. This was at the time of America’s Great Depression, where millions were out of work.  I’ll try to stay away from drawing political parallels to today’s economic situation, and come back to food.

The place I’m staying this year is geared up for “SapphireNow” like I’ve never seen before. One of the reasons I liked it (other than it used to be a lot cheaper) was the family aspect.  Now, they’re on the conference bus route, there were welcome handouts, and they even baked us cookies (I’ll need to remind them this is also the ASUG annual conference for next time). 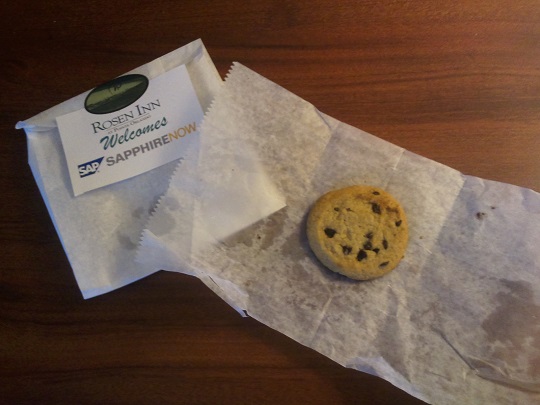 Last night, fellow SAP Mentor and good friend Jon Reed had a birthday celebration at the SAP Mentors welcome gathering.  Jon is one of the gentlest, humblest people I know, and an incisive writer to boot.  I always get a healthy world perspective from him. 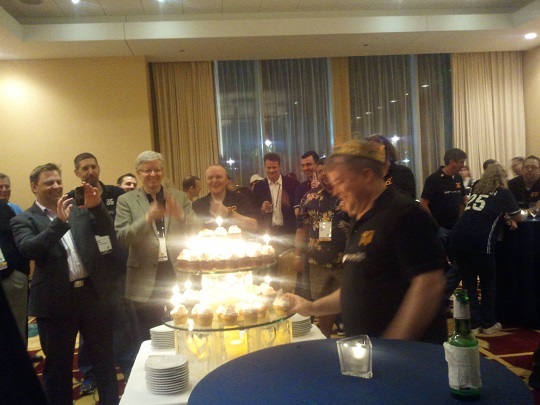 Many conference attendees worked on a Monday event, packing food for orphanages.  I support the concept, though I admit to having a little trepidation to a “feel-good” project at such an ostentatious event such as SapphireNow.  I hope those who did participate will remember the feeling in two weeks, and two months, and two years, continuing to donate their time to the bread lines.

Once another great blog providing a perspective that challenges us to think about what we are doing and whether it is for show or long term change.

In my favorite movie 'As Good as It Gets' is a wonderful scene in a restaurant where Cuba Gooding Jr. is trying to persuade Jack Nicholson to drive a neighbor from New York to Maryland. Jack Nicholson's character doesn't want to go and complains to a waitress, who responds (quoting from memory): "I wish someone offered me a free ride in a convertible to get out of the city!".

You are down in sunny Florida eating free cookies and what looks like cupcakes from the picture. Why not just enjoy it? 🙂

Why not just enjoy it?

Jelena Perfiljeva - good question. If you got the impression I'm having a terrible time here, I'd beg to differ. My tendency is to look for the hidden catch in many situations.  That works well in software debugging, but maybe not so much in all social situations.  It's a blessing, and a curse. If I rained on anyone's parade, my apologies.

If you got the impression I'm having a terrible time here, I'd beg to differ.

i don't think those cookies are either free or good for you. i, for one, wouldn't enjoy Florida humidity, but my kids wouldn't mind at that all. with all the commotion around a big event like this, they wouldn't know what to do with any of this, anyway.

i think what i'm trying to say is "different strokes for different folks".

trying to enjoy not being in Florida,

The importance of Will Rogers was that he could deliver insight using humor, a real talent that made him exceptional. Something we all should strive for in our own writings.

Although the 'big moments' may not live up to your expections, I'd always found that the greatest parts of conferences, like Sapphire, and just life in general, are those 'little moments'. You know, the chance conversation, meeting a new colleague, the exchanges of knowledge, insight, friendship, and humor that always go with these conferences.

And never under-estimate the importance of 'feel good' work. Longfellow said "Give what you have. To someone it may be better than you dare think."

Enjoy your 'small moments' and sorry I can't be there to share them with you!

Bob McGlynn good to hear from you.  It's been many years since our "Geeks and Suits" duo act. I almost added one of Will's most famous quotes, "I never met a man I didn't like." There's a lot to be admired for his optimism and positive spin on dire situations. I try to live up to that, only I can't tell jokes half as well. 😎