“There are few things of which the present generation is more justly proud than the wonderful improvements which  are daily taking place in all sorts of mechanical appliances… But what would happen if technology continued to evolve so much more rapidly than the animal and vegetable kingdoms?

Would it displace us in the supremacy of earth?

Just as the vegetable kingdom has slowly developed from the mineral, and as in like manner the animal supervened upon the vegetable, so now in these last few ages an entirely new kingdom has sprung up, of which we as yet have only seen what will one day be considered antediluvian  prototypes of the race…

We are daily giving greater power and supplying by all sorts of ingenious contrivances  that self regulating, self-acting power which will be to them what intellect has been to the human race.”

-–Samuel Butler, 1863, four years after publication of Darwins’s The Origin of Species

This snippet was extract from Ray Kurzweil’s book, The Singularity is Near. Particularly, I’m an admirer and a follower of Mr. Kurzweil’s theories, among them the theory of the Exponential Returns, of wich I’ll talk about in another post. In short, this gentleman is a genius, and if you never heard about him, remember this name and you’ll hear a lot about in the near future. That’s the only prediction I made so far 8-o

G-N-R, as mentioned in the title, is in reference of the three overlapping revolutions that will propell the exponential shift, of which we are only experiencing the very first moments.

N – Nanotechnology, in short stands for reprogramming matter and energy at the level of molecules using information processes;

R – Robotics, refers to Artificial Intelligence, the creation of intelligence machines, wether robots or not. 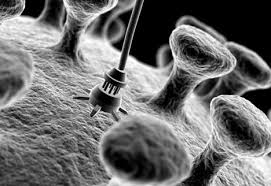