Ten Days on the Gamification Road

Gamification has been live on the new SCN platform for more than a week; I participated during the beta testing so saw no need to rush in and try things the first few days, as some would do.  After about a week, I tried a few of the new options and found, well, good news and bad news.

Just last month, I attended a Gartner conference, then wrote here about one of their analyst’s views on gamification, including what it might mean to SAP and SCN. At that time, the SCN project had been going on for a while (years it seemed), and was being tested.  I didn’t test much until the latter stages of the beta due to my own schedules.  I had seen the mechanics and SCN screen updates. What was missing was which bugs would make it to production, which new bugs would be seen be the massive scaling up of a live system, and what user behaviors would change.  While the last is intended to be the positive reason for adding gaming features, there’s also the negative sides of users going overboard or getting addicted (see, e,g. FB games like Farmville).

Gartner gave one common example of gaming as the “employee of the month” parking lot, meaning a simple recognition costs almost nothing, and could spur friendly competition to complete employee goals. Designing those goals is an art, so people “buy-in”, but also takes redesign time once the initial bloom wears off. SCN has gone through a few evolutionary stages in encouraging participation (I know; I have the T shirts to prove it).

I see this effort a bit like a scavenger hunt, where users are given lists of things to go get. For days, SCN has been seeing likes and ratings, as well as blog and document creation, spike up.  I don’t have the numbers to show how significant this is, but here I am writing a blog to get one of my next 4 completed and pass my own next mission.  Are there empty posts or updates?  Yes, I think so.  Will it kill SCN quality? A little, yes.

After letting the dust settle, I compared the missions in the live SCN system to those in the beta, which were truncated to allow better process testing.  I got a instant badge for logging in, and then what? 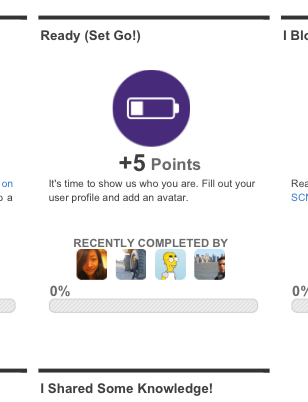 0 points here. It says “fill our your user profile and add an avatar”.  Hmm. mine is already filled out, and I have an avatar.  I guess the odometer went back to zero for some tasks. 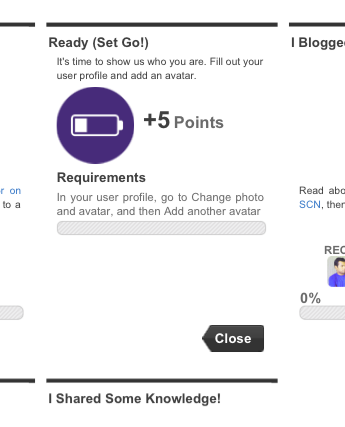 The “Close” button only appeared on the iPad screen after I located the hidden “flip this card over” button.  I did not spot that option during testing, nor did I notice it in training.  My bad.

The gear button (found when you hover correctly): 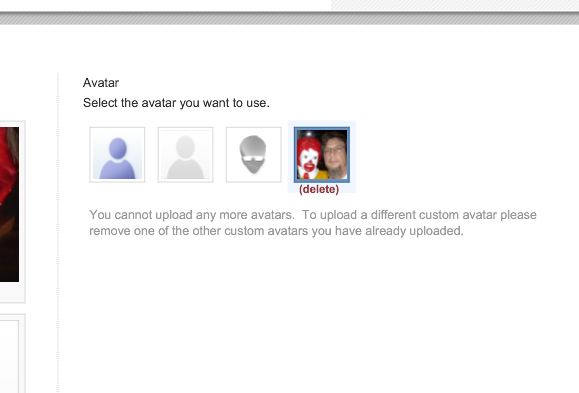 Hmm. As before gamification, this screen says “You cannot upload any more avatars”.  How would I complete a task I’ve already completed?

I opened a ticket, only to find I needed to delete one avatar, and load another. Not what the directions say, exactly, but like many computer programming exercises, it is logical. 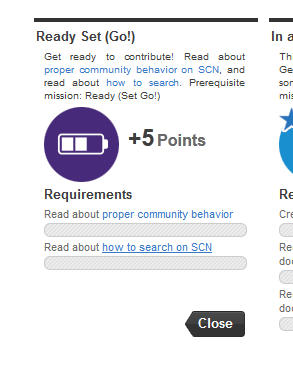 The second task in the same thread was easy enough, once I flipped the card over.  Links provided went right to the pages needed.  It’s too bad there was not a comprehension test, since clicking on a page is not the same as “reading it”.  As a heads up (free advice), here are the links in the above image for your review: 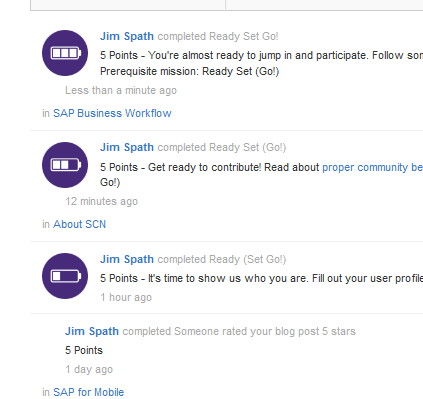 With those first steps out of the way, getting the next two done was easy enough. Rewarding? Um, sure?  What did I accomplish?

After this, I keep being told my next mission is to earn “I was right” by having an answer marked correct.  That might be a while.  I’m not a high level contributor to the forums (though I spend way too much time removing chaff), and I’m not interested in “I was right” compared to “I said what I was thinking”, or “Here’s a problem and here’s how I fixed it”.

The other next “missions” I see are creating more documents.  I did one just to see how the reward mechanics work.  But there are many problems with setting quantity goals here – I’ll do 4 blogs a month regularly, but I only create wiki pages when necessary.  If lots of users decide to spontaneously create documents, where is the organization, the hierarchy, the taxonomy?  My sense is SCN will end up with lots of useless material due to these challenges, which makes search harder and time spent getting good answers much longer.

I’ll eventually be marked right somewhere, I assume.  And in a year, maybe I’ll write some nice documents.  Has my behavior changed due to these games?  A little.  Has my attitude toward SCN changed? Even less so.  This is an interesting wrinkle, but I’ll keep doing what I do anyway.

Left out one iPad image in the original post. 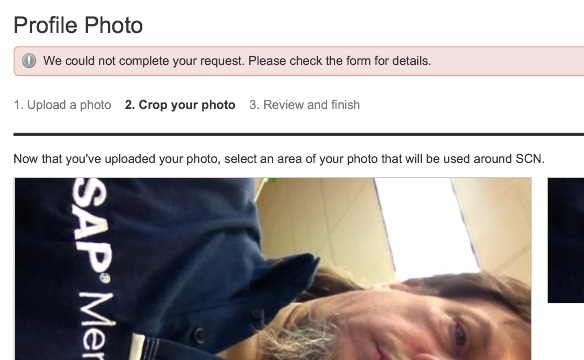 “We could not complete your request. Please check the form for details.”

Forward and reverse sides of his current “mission”: 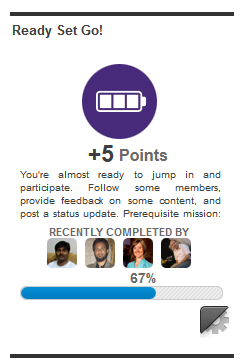 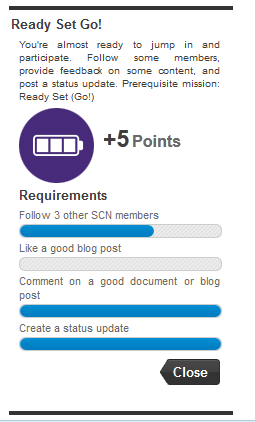 Click on the gear icon to flip the image over.  The missing requirements:

"It's too bad there was not comprehension test"

Yes, things have really spiked for sure.  I will do what I keep doing as well.

It's too bad there was not a comprehension test"

One thing that concerns me is that we do indeed seem to be encouraging people to produce content, but there's less encouragement to properly rate content. This is only part of the "baby steps" badge, as far as I can tell. That is inevitably going to result in increasing the noise. Given that the ratings system is meant to be the way good content is filtered form the rest, this seems to be a bit of an omission. Maybe it is due to come along soon?

Not being prolific blogger, and never having produced a document at all on SCN so far, it is going to take me a while to get beyond the initial easy missions. Not that that bothers me particularly. I'm definitely in the "keep doing what you're doing" camp also.

Steve, I understand you can become "addicted" to gamification pretty quickly 😉 but you know... You don't have to get all the badges! If you like blogging, then continue doing it and get the badges. We're not asking you to create documents unless you really see the value and have to share structured material in the form of a document.

But we will reward people who do a lot of everything with a badge, just because it's kind of exceptional.

I am enjoying the new Missions, but I would have liked to see a Mission encouraging members to "like" and rate content. Is it there and I just overlooked it?  I browse the new blog posts frequently, and even very interesting and timely posts with hundreds and even thousands of page views are doing well to get over 1% of page viewers liking them. Now for a place that most of us visit regularly or even daily, surely if readers don't like more than 1% of the content, what the heck are they doing here so often? My guess is that they like it, they are not yet motivated to take that nanosecond to "like" and rate the posts. I'm not sure what we bloggers can do to get our readers off the dime. OK, I'm off my soapbox now. Thanks for the place to vent!

There are missions that are hidden, i.e. you don't see them until you have earned them. We did this to reward natural, altruistic behavior, and not to encourage liking/rating/etc just for the sake of it.

I can't say more, but I'm sure you will find out one day soon enough!
Giving feedback is very important, not just to get a badge but also to help us identify good content. So never stop doing it!
Thanks,
Laure

Jim, great post, as always! I agree that basic missions should have already been completed for the existing members. Deleting and reloading a photo just for the sake of completing a mission seems like a waste of time, quite honestly.

By the way, love your "short bio" in the profile, glad you didn't change it. 🙂

Jelena:  Thanks.  Do you know the Bob Dylan song I borrowed my bio snippet from? 😏

No, sorry! Although knowing as little as I do about Bob Dylan (only learnt while living in MN where he was born), I'm not surprised a line like this would appear in his song. 🙂

I think actually that it's more fun to discover mission and start "fresh". I agree with you and Jim Spath that the mission with the avatar is not straightforward at first. We actually put a request with IT to be able to add an additional avatar. For some reason they limited the number of slots available.

Not only did you complete a content creation mission, but as always you provided your unique and valuable insights.  I can admit that getting hooked on gamification (yep, I am in there playing) has actually made me more attuned to remembering to give attribution.  I think Laure Cetin and Audrey Stevenson will be very disposed to listening to ways of improving and enhancing the missions.  Thanks for completing this one by providing something quality to rank.

Love to see all these great thoughts above on the new gamification system! The idea of encouraging more ratings and likes to filter good content is embedded in the mission design, but looks like we need some more:)

We designed missions for different content types, and we also have missions encouraging members to come out of their comfort zone and try other areas, but it doesn't mean we need to do it all. If you are a RPG player, you will know that you always have limited points to spend on your skill tree, and it's usually wiser to develop more along some branches and just get the basic on the others. And the Me in 3 will be the perfect place to show your style.

Nice blog Jim - I am commenting here to try and gain some points. 😉

I almost hit the "Report abuse" button, but was afraid it would have earned you even more ponits...

Good thing you took the time to reflect on the first days of gamification here on scn .

I did the opposite: tried the features early on (yes, collected a few badges, and yes, couldn't earn others due to the 'mistake' of letting everyone start from scratch) and since then I've not really looked into it anymore.

What does that mean? Well, I think (like to think) it means I don't appreciate those missions and badges enough as long as they don't contribute to a better scn .

And IMO that's the greatest short term risk: people adding content just for the sake of it, and to complete missions. But I hope I'm proven wrong.

Anyway, thanks for sharing your experience so far. Hope it'll get you a badge 🙂 .

i do sincerely hope that SCN is not going to become another "Farmville hosting" environment.

P.S. not sure if this comment gets formatted properly as the jive app seems to be acting up.