Getting an Update on the Visual Intelligence Roadmap – What is Coming

On Tuesday, SAP’s Mani Srinivasan provided a webcast update on Visual Intelligence, reviewing the roadmap.  All roadmaps are available for download at Service Marketplace (service.sap.com/roadmap).  Please note that the usual disclaimer applies – what is discussed below is subject to change. 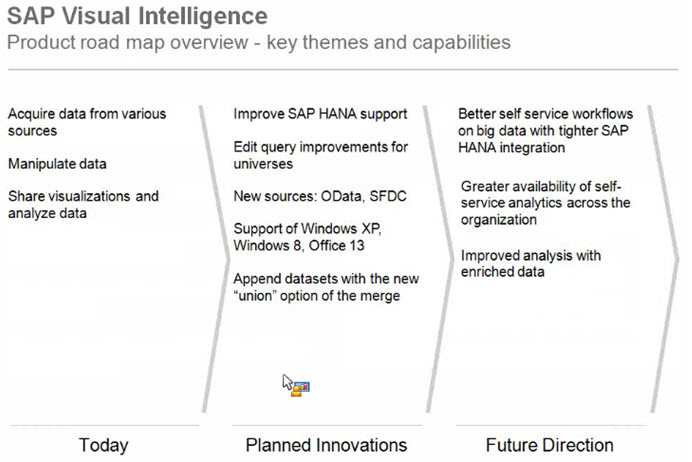 Under planned innovations in Figure 1, Mani says XP support is coming soon.  The other interesting feature is the ability to edit query for universes, something Andrew Fox has asked about on twitter.

Mani said you will also be able to do a Union. 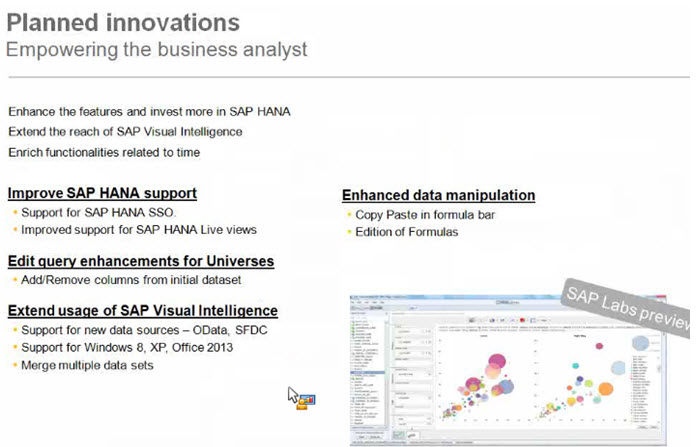 Edit query enhancements for universes is being improved, with an one option is to add and remove columns from the dataset.

Mani showed us a demo connectivity to OData.

Formula features are shown in the upper right of Figure 2.

Planned innovations are planned for SP11. 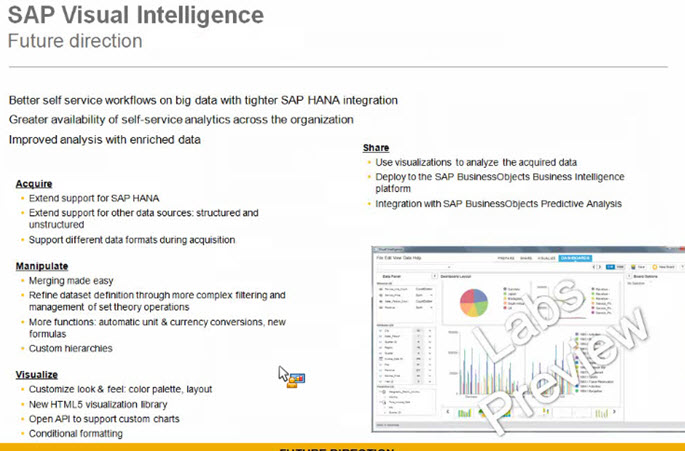 Figure 3 covers future directions, which would be after SP11.  Mani discussed the possibility of connecting to ECC, creating concatenating keys on the fly, segmentation analysis, the ability to create custom hierarchies.  He also said they plan to improve the formula editor, the ability to have your own color palette, conditional formatting.

The upper right of Figure 3 shows the sharing – ability to share datasets and visualizations, including deploying to the BI platform.

Mani said they plan to open up a visualization library for partners.

Q: Can we build an OLAP universe on BW for Visual intelligence ?

A: For BW, work with BW on Hana

For non-Hana BW customers, looking into the feasibility

Q: When will Visi be available on iPad?

A: Publish to Explorer then you can see it on Mobi on the iPad

Thanks to SAP’s Stephanie Redivo for setting up this webcast and thanks to Mani.

Meet Mani in person next week.

Thanks for the info Tammy.

THanks to Tammy, Mani and Stephanie.

BI 4.1 roadmap was also discussed at BODevs meet up yesterday. It was so interesting.

WIth second question, if I am not mistaken then there will be option to share visi to sap lumira cloud and without an app it can be shared on mobile devices (https). It was shown in BI webinar yesterday.

Interesting.  I was just talking with someone on my team - who complained the Visual Intelligence was only available to customers with BW-Accelerator or running on HANA.  And since we are neither of those, it's frustrating.

Not being a VI/BW person myself, is that what was meant by:

Q: Can we build an OLAP universe on BW for Visual intelligence ?

A: For BW, work with BW on Hana

For non-Hana BW customers, looking into the feasibility

Sue: I believe you have it correct....thank you for reading and commenting (as always)

Right now there is no native BW connection available for Visual Intelligence.

Yes.  I totally agree that Lumira (formerly Visual Intelligence) should have a direct connection to BW.  The competing products like Qlikview have this.  With so many BW installations that don't use Business Objects or HANA (since HANA has been priced out of range for mid market customers), Lumira's competitors can get a foothold resulting in a lost opportunity for SAP.  Also, Lumira has a lot of catching up to do against Qlikview.

2. Add write back to db ability