Why I am Blogging on SCN

This is my first blog for SCN. I thought it would be interesting to share my insights regarding a lobbying trip I attended in March this year.  Currently, I am responsible for Strategic Partnerships at SAP, managing a portfolio of community partners, including the Silicon Valley Leadership Group (SVLG).  Twice a year, SVLG organizes a lobbying trip, and on this recent one, about 60 CEOs and senior executives from Silicon Valley’s leading companies, representing tech, healthcare, city government, bio science, energy and banking, made the trek.

My team’s priority topic in D.C. was comprehensive immigration reform and Emily Lam, senior policy expert from SVLG, staffed my team.  Other topics included comprehensive tax policy, cyber security and transportation. Over the 1.5 days, we visited with over 22 US Senators and Congressmen/women.

I was particularly impressed with Representative Bera who described himself as the ultimate American success story.  He is the son of immigrant parents from India who went on to medical school and then ran for Congress and won the 7th district. His proudest moment was seeing his parents’ smiling faces in the stands as he was sworn into the US House of Representatives.

The first full day of meetings kicked off with a breakfast at the NASDAQ offices and meetings with Representatives Raul Ruiz (D-CA-36), Eric Swalwell (D-CA-15) and David Valadao (D-CA-21).  These three representatives are also newly minted US Congressmen. When asked of their opinion of the bill to pass comprehensive immigration reform, all three were very positive that a bi-partisan agreement could be reached. For most of the members on the trip, our top priority centered on finding and keeping high skilled labor to fuel the job growth in Silicon Valley and beyond. 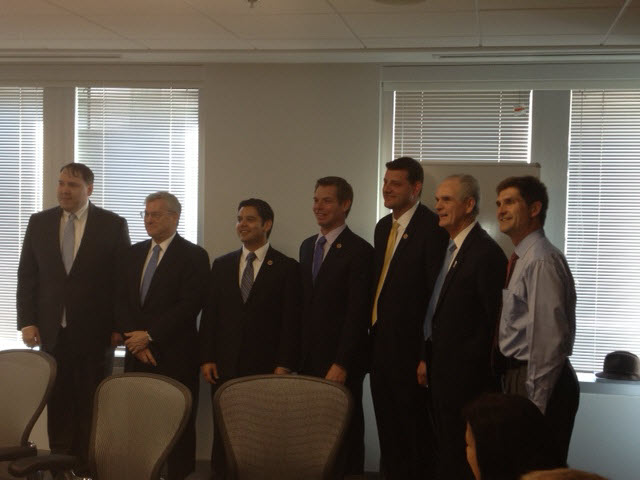 SAP’s official position on immigration is that we support the current bipartisan efforts at reforming immigration and welcome an immigration package which embraces high-skilled immigration reform principles, including:

Make the H1-B and green card programs work For America

• Exempt spouses and children of green card recipients from the green card cap.

Recruit and retain the best and brightest

Our meeting with Representative Earl Blumenauer (D-OR) was held in the hallway of the Longworth building and given the fact that he is a longtime advocate of cycling and alternative transportation, I was able to brief him on SAP’s “connected car” initiative. The initiative will allow electric vehicle drivers to find available parking spaces and charging stations in congested cities all via the console in the car.  The SAP team is also working on green light synchronization capabilities too. Dinner included a panel with representatives from the FTC.

I was struck by how generous our elected officials were with their time and it appeared they were very interested in what we, as representatives of Silicon Valley, had to say.  By taking time to visit a place that is so unlike Silicon Valley, I was acutely aware of how unique our region really is.

Thanks for sharing some insights on how this happens for "the rest of us" who don't get to go to the hill.

Please continue to report on progress and other similar trips.

Happy to see that SAP is taking a stand on immigration reform.

Good to see that SAP is in favor of high-skilled immigration reform. I'm located in the Washington DC area and have had opportunities to talk to our elected officials on this issue through volunteer organizations. Please let me know if I can be of any assistance to you. I will stay tuned for more information on this issue.