VIDEO: Hybrid as the Future of Cloud Computing

The popularity of cloud computing is rising to stratospheric levels. Dell announced Monday that it acquired “early cloud pioneer” Enstratius, and Google’s foray into hardware with its Chromebook Pixel “cloud laptop” is well underway.

Enterprise software is naturally following the cloud to its lofty heights, as SAP co-CEO Bill McDermott explained to Business Insider last week. Cutting hardware costs are big issues for companies — no one wants to buy more hardware, and most of what they use still works for them.

“They’re willing to invest in software, which is the innovation layer of IT,” McDermott said. “If you could take cost and risk out of the implementation by leveraging a private or a public or a hybrid cloud, you should.”

That certainly seems to work in favor of SAP, which soared 385 percent higher in the cloud year-over-year, according to its Q1 results last month. Looking forward, McDermott foresees many enterprises taking a hybrid approach, running business processes with their choice of on-premises, private cloud or public cloud solutions.

“We’re in all three,” McDermott said.

“Chromebook Pixel: Work and School Computing In The Cloud” in Forbes 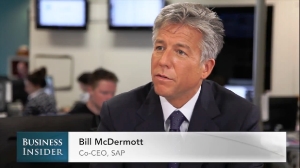 If we look back in time, the gas energy industry in the 19th century and the electricity industry in the 20th century went through the same local (on-or near premise) to centralized approach. This happened due to progress across ROI, risk reduction, technological breakthroughs etc, ofcourse there was resistance from companies that lost out because of this. Companies with long term vision were able to embrace the new wave in time.

Now, path of Cloud is similar to the gas and electricity industry. On-premise/public/private/hybrid etc and perhaps a grid. Companies who get it will thrive.

I'm reminded of 'Cloud Atlas' movie - History has a funny way of repeating itself and connecting with people.

Good point, Ramesh. The future belongs to innovators -- and one of the best ways to continue innovating is by listening to what customers want.

That's something that SAP seems to do very well.

Well said on the future of cloud computing! Good one.