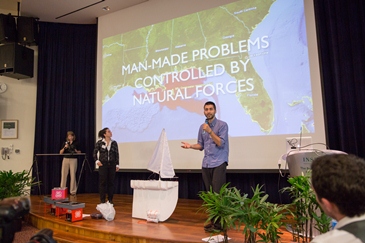 As technology becomes more complex, a group of brilliant entrepreneurs is using it to tackle some of the most fundamental human challenges of all time—clean food and water, adequate and affordable health care, accessible education, and the chance to live a better life. These 11 start-ups from 10 countries and five continents recently took a 100-day voyage around the world as part of the Unreasonable@Sea program. Co-sponsored by SAP, their incredible journey included stops at 13 international ports of call where they were greet by local business and government leaders, venture capitalists, and non-government organizations, as well as SAP experts. The concept was simple: by exposing these innovators to even more great minds from different cultures, they’ll better nurture their ideas, attract investment, and scale fast. You can find the details about the journey, including the prominent business and social thinkers and leaders who accompanied the entrepreneurs, in this article. Meantime, these committed start-ups deserve a shout-out for the great work they’ve already accomplished.

Aquaphytex turns conventional waste water treatment on its head with a natural plant-based approach that’s less costly and just as effective. With systems installed in over five countries, Aquaphytex has generated over $4,000,000 USD in revenue in the past three years while giving 300,000 people each day access to clean drinking water.

Damascus Fortune captures the carbon content from industrial and automobile exhaust, and converts the exhaust into a product called Carbon Nanotubes which can be used to build cars, space ships, buildings, laptops, and mobile phones.

Solar Ear has developed the world’s first solar powered hearing aid which last for two to three years, and is chargeable via the sun, household light, or a cell phone plug.

Protei has created a shape-shifting sailing robot (in photo above) that cleans up oil spills and plastic in the ocean, and collects invaluable data about the environment.

Evolving Technologies has pioneered a light, portable endoscopy system for the needs of women in developing markets for less than 4% of the market price.

One Earth Designs has a parabolic solar cooker that harnesses the sun to bring clean energy to three billion people who lack access to clean fuels.

Prakti Design stoves cut fuel use in half and reduce the smoke emitted by 70%.

Artificial Vision for the Blind gives people a chance to see using glasses with a camera, mini-computer, and transmitter that together activate the visual cortex of the brain

Together, these entrepreneurs have generated tens of millions of dollars in revenue, are impacting millions of individuals directly with their technologies, and have achieved operational scale in over 30 countries. Applying the latest technologies to tackle age-old human problems makes perfect sense. Ultimately, the value of technology is best measured by the good that it brings into people’s lives.

Great highlight, thanks for sharing! Looking forward to learning more about the IOU project - love the beautiful textiles from India.

Nice to hear your interest on Indian textiles 🙂

Great achievement! Thanks Susan for sharing.