Just recently our development team released revision 55 of SAP HANA Studio and I was very pleased to see how many improvements had been included this time.

Here’s a quick rundown of my favorites in no particular order:

If you ever had to review a crash dump or run time dump file in SAP HANA Studio you will have noticed, that the first things you have to do are always the same.

You open the file by double clicking on it in the trace file list.

Then you have to change the default selection of “Show End of File” to “Show Entire File” and finally you have to scroll up to the table of contents section, from where you start to review the file.

Typically one would then want to navigate to a specific section of the crash dump file, say the [CRASH_STACK], and so either the scroll bar of the text area is used or the text search feature is put to use.

All in all not really user friendly and a bit ‘geeky’ (although this maybe doesn’t bother the folks that typically would try to make sense of the crash dump files anyway…). 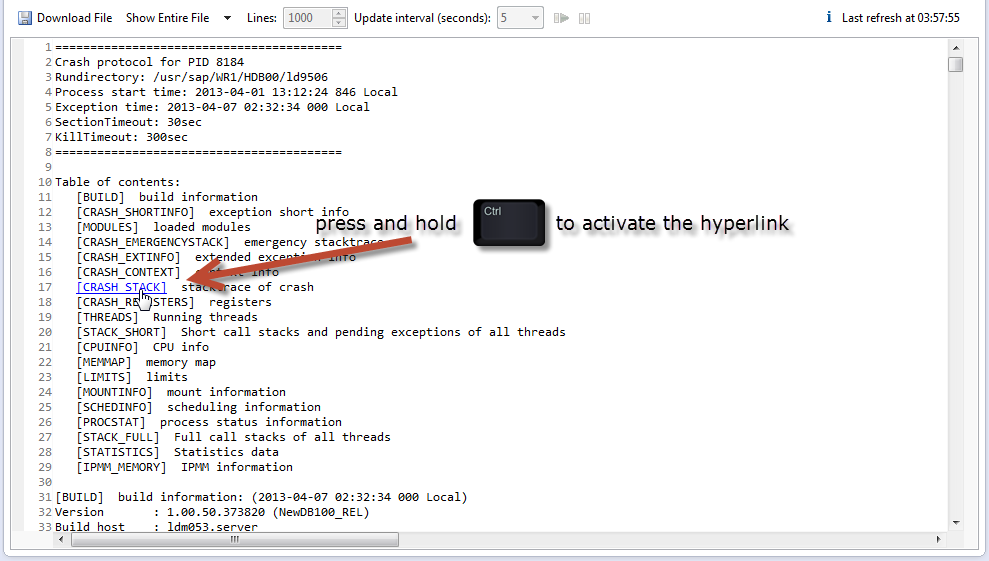 The file automatically opens in “Entire File” mode and the text window shows the actual start of the file, thereby showing the table of contents.

And, tataaa, by pressing the [CTRL] key, the table of contents entries are turned into clickable hyperlinks that allow for a quick navigation within the crash dump file.

As SAP HANA Studio is based on the Eclipse Platform, it also gains from the advancements that this platform performs.

One example is the availability of OS dependent UI themes, like “Windows 7” or “Windows XP” that make the Eclipse platform look more like a OS platform native application.

A sample for the, sometimes slight, differences in the looks of the UI can be seen just here:

To try out the different themes, navigate to “Window” -> “Preferences” -> “General” -> “Appearance” and choose the settings in the dialogue shown below: 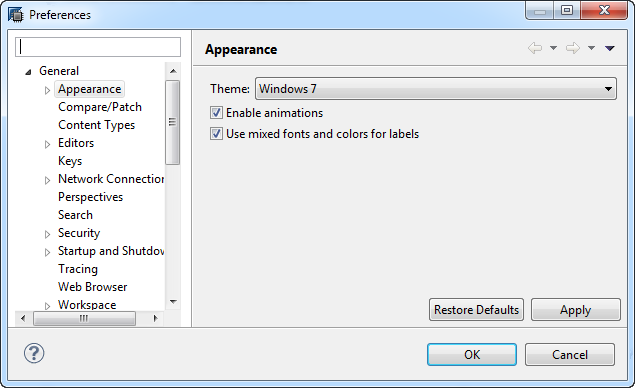 If you are like me, then you’ve been using the option to activate the JDBC trace in SAP HANA Studio quite extensively.

I use it for everything between actual trouble shooting to figuring out, what commands are sent to the database by SAP HANA studio, just to learn about what a specific feature really does behind the curtains.

If you haven’t done this yet but want to, no problem!

Simply right click on the DB connection icon in the navigator tree and select “Properties”. In the dialogue that is opened, select the “JDBC Trace” section and tick on the “[ ] Enable trace” option. This feature allowed me to learn quite a lot about SAP HANA studio, but from time to time I forgot to turn it off again.

While this is not a problem per se, I’m one of those lazy guys that barely ever set up the maximum trace file size but always wonders why performance is not up to the scratch at times.

So I ended up with having super large JDBC trace files in my trace file folder (which are barely useful) and worse than necessary performance (due to the trace file writing).

If I remember correctly, this one has been specifically built based on my wish, so a big THANK YOU goes out to the development team for implementing this!

Let’s be honest: every one of us has been working in SAP HANA projects where users/developers/DBAs shared a common user account in SAP HANA.

Maybe something like “POWERDEV” or “SUPERADMIN” or whatever you fancy.

While we all know that this approach has its severe drawbacks, there’s probably no way to overcome this practice.

Unfortunately this makes it very difficult to assign a specific session/connection (e.g. one that holds locks on records or that runs a SQL command which allocates massive CPU or memory resources) to an actual user.

This kind of problem has long been solved though, as we faced it already with classic DBMS and SAP NetWeaver.

The solution is to use session context variables (I’m going to write about that more extensively in a separate blog post).

With these variables set, it’s easy to identify which O/S users are actually using SAP HANA Studio and also which version of it.

APPLICATIONUSER in this example is set to my SAP network logon user name “I028297”.

The APPLICATIONSOURCE variable is set with a short JAVA method stack, which should allow finding out, which module of SAP HANA studio created this very connection.

The variable values can be reviewed, among other ways, in the “Administration Console” -> “Sessions”:

If you ask me, this is super useful!

Not sure if you ever stumbled over this, but personally, I was bugged a long time by the nasty CPU consumption of the modeler join editor views.

Even when you didn’t actually do something, the CPU was constantly humming along, which on my Laptop eventually led to the activation of the thermal fans (that’s how I initially found out about this).

After an internal support message and some revisions in between, the modeler editors now finally leave my laptop fans remain silent and the CPU consumption low.

I’m also under the impression that the whole graphical part of the modeler became more reactive to user interaction, but that might be just me…

Thanks once again for making SAP HANA Studio a bit more usable.

Hope you like the enhancements as much as I do.

Thank you for revealing the new features.

Another valuable piece of information from you Lars. Thanks for sharing. 🙂

Thanks for updating us about new features.

Also heard about making regi.exe available for 32 bit version. Is this coming with SPS06 or planned for future.

to reiterate what everyone else has said, thanks again for this update.

Is HANA SPS6 release? I could not able to see it from swdc.

I think it is 3rd July. But needs confirmation from SAP.

Once again, SAP HANA is quicker than it's own shadow...

Cheers and have a great weekend!

Thanks for Updating New features..

I am new to the SAP HANA world and trying to learn it wherever I can.

I found this information to be useful and handy. Being a DBA I always has that curiosity to check the SQL command behind the windows so in order to achieve that do I need to keep the trace ON always?

Thanks Lars. I am also reading your book which you have in the picture on this forum.

Honestly I wouldn't recommend keeping the JDBC trace set to ON all the time.

It's not all that easy to find the commands.

Instead of trying to see all the commands behind all of SAP HANA studios features I'd recommend to do it step by step and to use the JDBC trace only as an exception.

I'd say reading more conceptual material like all the really good FAQ sap notes (mostly by Martin Frauendorfer) or well, Richard's and my book (thanks for buying!) will get you faster to a solid understanding of the mechanisms inside SAP HANA.