Game Mechanics on SCN: A Quick Look at How We Got Here, with Agility

When Laure Cetin was looking for someone to join herself and the new intern, Sean Yang, on the SCN Gamification project at the start of the year, I first supplied a few names of folks I could think of in the SCN team who would make good contributors to such a large project. Then Laure said “No, what I really want is to know if you can join this effort. You.”

Oh wow, I thought. I hadn’t even considered that possibility! I realized an ask like this had to be carefully thought through–I would need support from my manager, Patrick Flanders, and my team mates (too numerous to list here), who would need to step in to help with my normal SCN tasks.

I also knew I’d have a lot to learn about gamification and game mechanics. But of course, that was the exciting thing: a new angle to the editing and community management work I had concentrated on until now. I felt a charge of energy, and upon getting approval from Pat, I leapt into the fray with Laure and Sean.

Immediately I immersed myself in game mechanic literature and became a sponge, absorbing all I could on the topic, while at the same time coming up to speed on all the work that Laure and her manager, Jeanne Carboni, had already done over the many months before this point. I reviewed the project plan, eyed the target launch date, and gulped! April, still several months away, seemed like tomorrow–there was so much still to do!

While we had regular calls with our IT team and our vendors, Jive and Bunchball, things were progressing at a, shall I say, “measured” pace, partly because the teams were distributed. We were dealing mainly with: 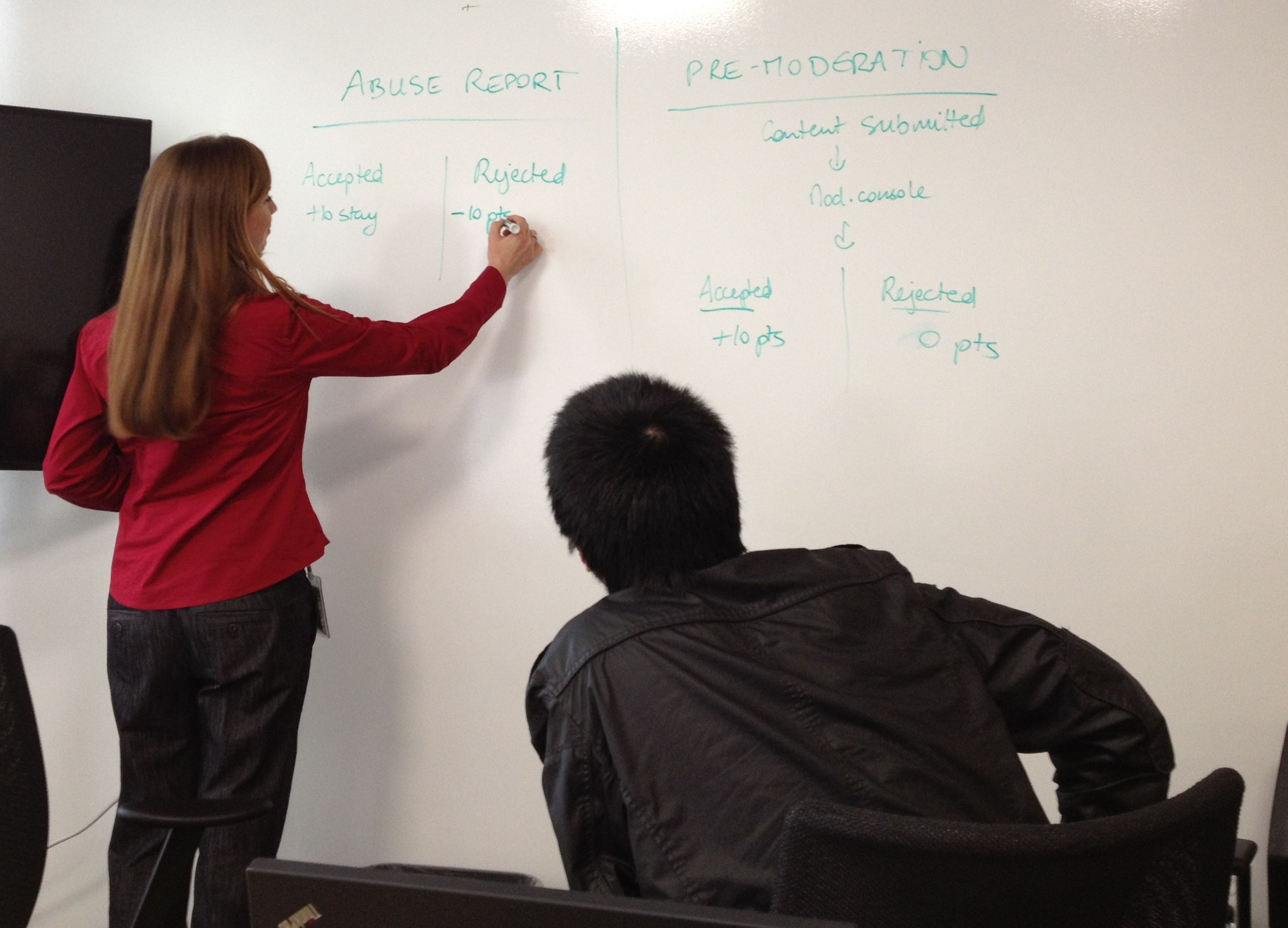 Getting on the phone together once a week was about all we could manage with so many people and so many time zones.

Photo: Laure maps out gamification point handling on the whiteboard, collaborating with Sean

It quickly became clear that with an aggressive timeline like we had, the project needed a big boost, a chance to make significant progress in a short time. We needed to shift into a more aggressively agile mode.

So we invited Oliver, lead architect from SAP IT, Nimi from Jive project management, and Kevin from Jive development, to come to Palo Alto to spend a week in a project room and move things forward. Management on the SCN side (Chip Rodgers) approved the request, as did management on the SAP IT side, and before we knew it the assigned week in February was here.

In a serendipitous coincidence (is that redundant?), the conference room we wound up hunkering down in was named “Mission“. We decided it was a good omen! Working side by side, co-located like that, we made amazing, daily–even hourly–progress.  There’s something magical for business types like myself and Laure when we can describe verbally and with a whiteboard how we are imagining a feature should work, and then after the lunch break find that the developer has already coded something and you get to see it in action on the screen already! (Kevin and Oliver, you knocked our socks off!)

Photo: Oliver and Kevin working side by side in the “Mission” conference room 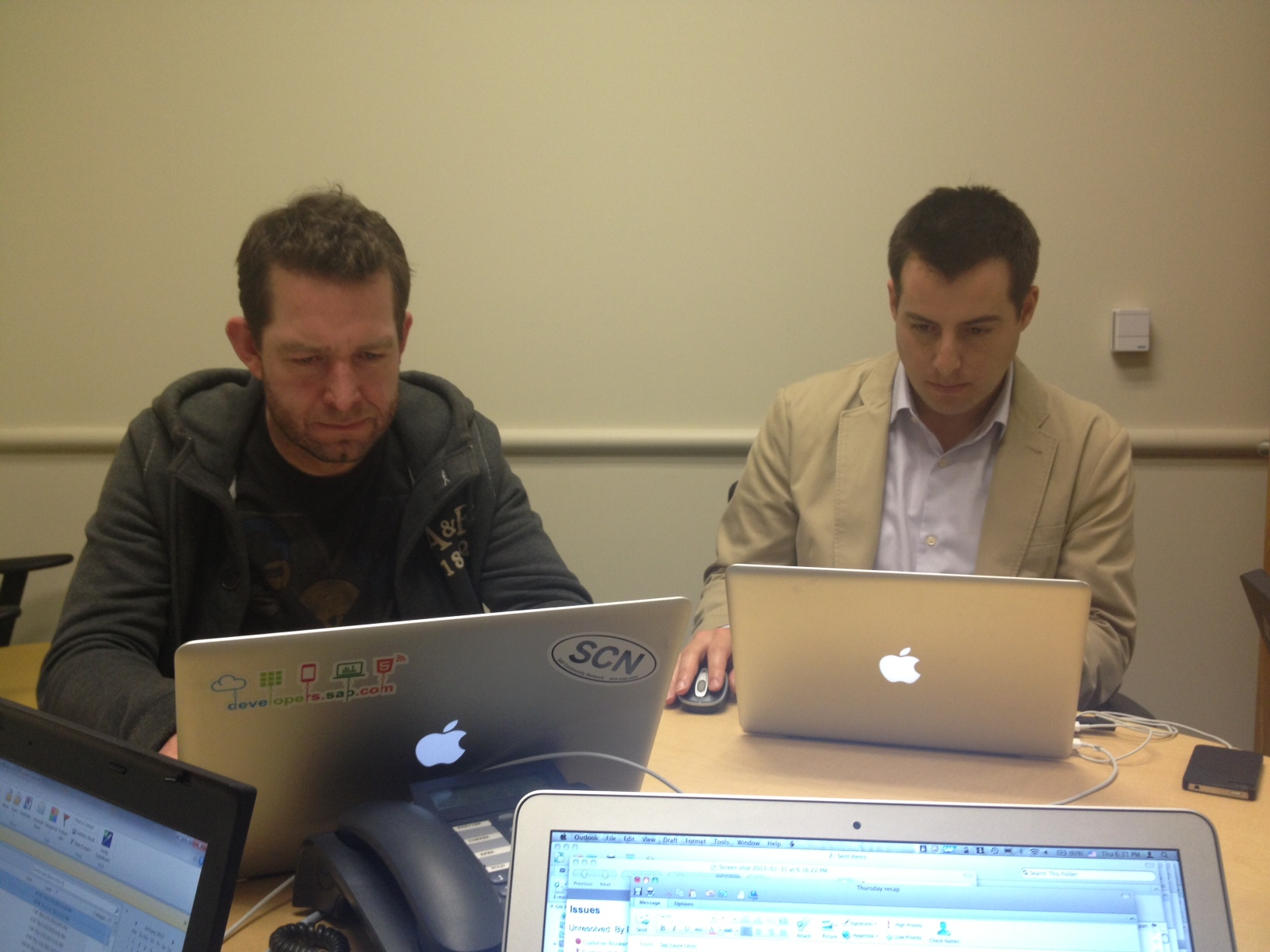 Photo: Sean, Laure, Audrey (myself) and the back of Kevin in the room 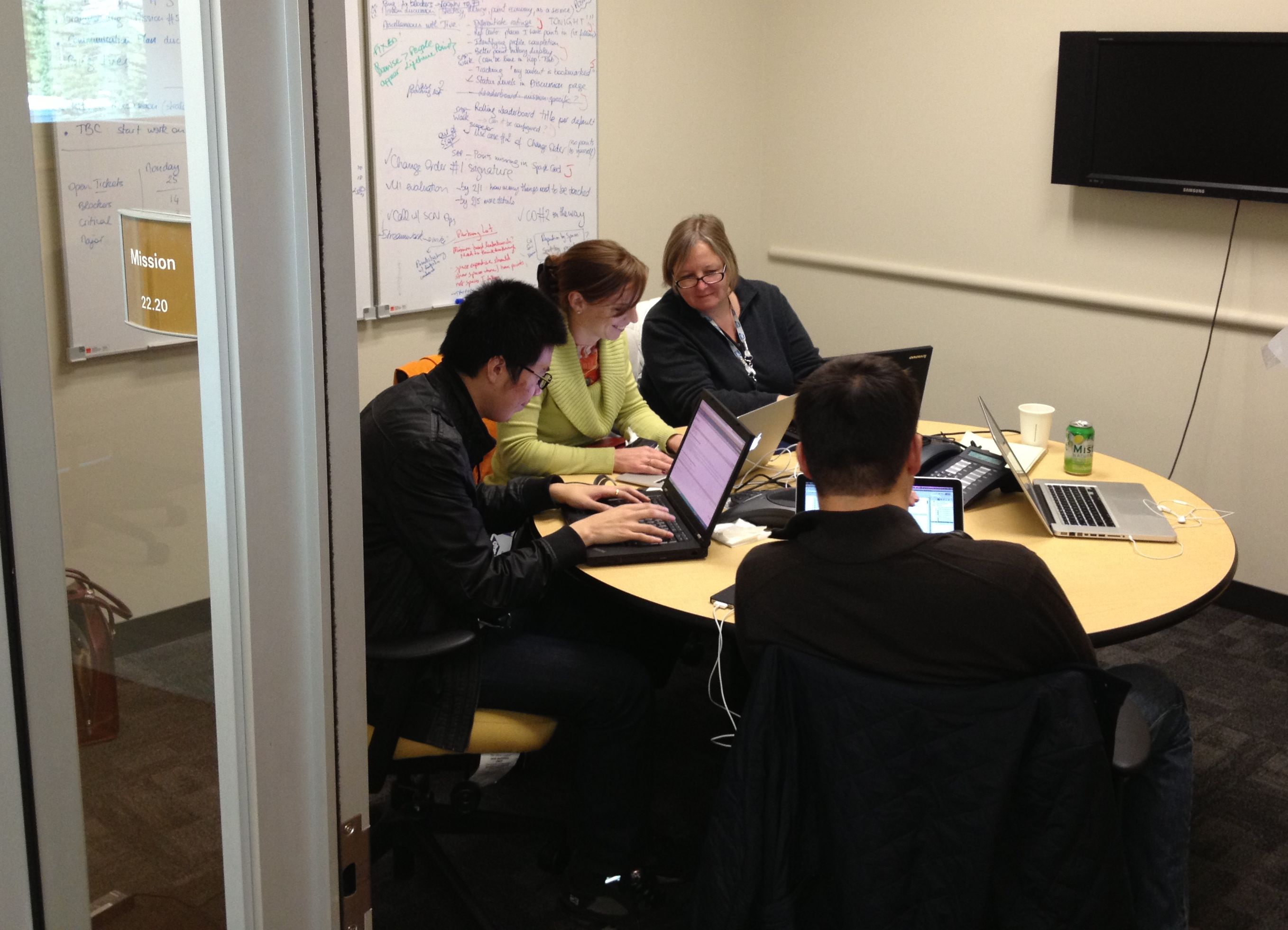 We literally saved weeks of long-distance back and forth by sitting in that room together, eating, drinking, and breathing the gamification of SCN. (OK, as you can see we also ate soft pretzels, croissants–Laure knows a wonderful bakery in Palo Alto!–and other similar “project food”.)

Photo: Oliver enjoying a bite, getting ready for the next round of gamification project work 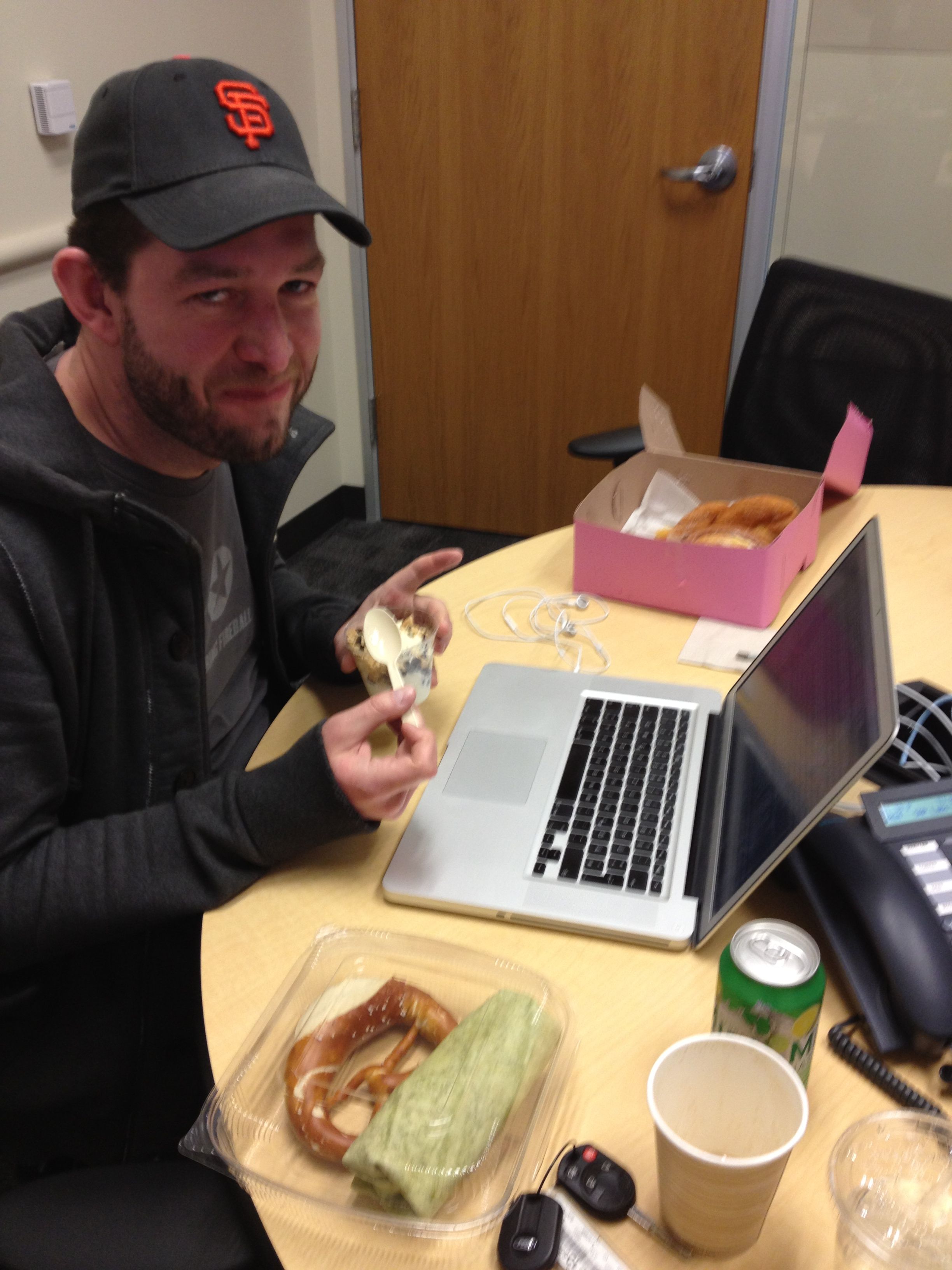 Before we knew it the week together was over. But it had a lasting legacy. We had experienced what it was like to work so closely together, and we weren’t about to lose that momentum! Laure, Sean, and I started daily calls with Oliver, and Oliver kept in touch on an ongoing basis directly with Kevin from Jive, via Skype. Our daily synch calls were crucial, both the ones our Palo Alto team had with Oliver and the ones Oliver was having with Jive.

As the project progressed towards launch, Sean decided to treat it like the playoffs and stopped cutting his hair. Like a National Hockey League player grows a playoff beard,” Sean grew “playoff hair”. We were in it to win it! 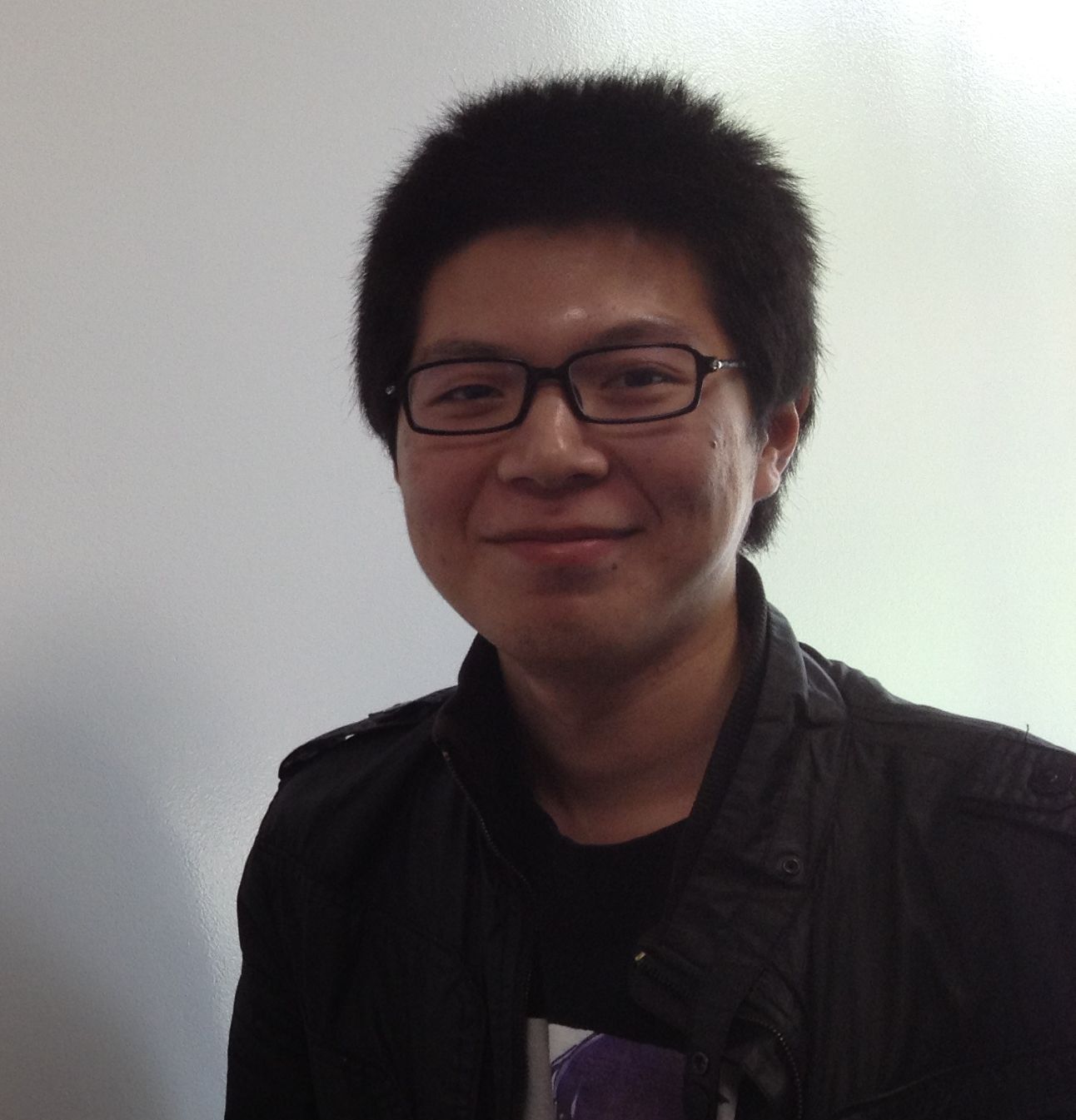 Like any project, however, we experienced some hiccups, and when SCN was hit by spam attacks in March, it had a serious effect on the resources for the gamification project: development of spam control mechanisms became highest priority (as you would expect). We realized that early April would be too early to launch game mechanics on SCN if we wanted a stable environment and the full attention of our IT resources, our support resources, and our own SCN team. So we pushed for our launch date to be moved, and SCN management agreed that a two-week extension was in the best interest of the community in this case.

The gamification core team, along with our vendors, did not take this extension lightly! We jumped into action to address issues that had taken a back seat during the spam control battle. In daily calls between SCN, SAP IT, Jive, and Bunchball, we knocked out these most important issues one by one, until all of them had been addressed.

Then, just when we had made the final go-live decision with all levels of management, we discovered an issue with some of the missions on our production system that were not there on our QA system. It was literally four days before Sunday’s launch. But we didn‘t flinch. Instead, the project team together with the engineering team from Bunchball and support from Jive turned on hyper drive to investigate the issue and fix it. On Saturday, Laure could finally give the all clear to the team and tell SCN management that we were on track to launch on Sunday. All systems were go!

Now the game mechanics are live in our community, and preliminary feedback seems to be positive. We, the SCN gamification core team (Laure, Oliver, Sean, and myself), feel good about what we’ve launched, and we hope the community will find the missions engaging and fun.

Of course, we know this is just the beginning: Phase 2 is already being scoped and expansion of the program is in the works. And while we can’t share much about the specifics of what Phase 2 will look like, you can bet on one thing: we’ll execute it in an agile fashion!