When working on Integration tools like Business Connector/.Net connectors/XI, we use RFC call to  process in the backend SAP R/3 system. Because when we call any SAP RFC function module from any integration tool, it will be processed on any available application server in the backend, where a user breakpoint cannot be triggered to debug the ABAP code in the backend system. The situation becomes worst to the developers/testers when they want to test the scenarios like HTTP-XI-RFC, HTTP-XI-PROXY, and FTP-XI-RFC so on. But we have a simple solution to debug the ABAP code when we are working on Remote function calls.

Log in to the sap system where RFC function module or Proxy class implemented.

Open the Function module/ Proxy class and set a break-point. It is not mandatory that break-point has to set only at the initial line of the code; user can set anywhere in the entire code, which will be executed on RFC call.

Execute the transaction code “SRDEBUG” (Note: this tcode is available only in latest ECC 6.0 system)

Click on the button Activate Debugging. A pop-up screen will be opened. Fill the User-ID with which break-point has been set. (The same user-id should be used as authentication data in the XI while creating RFC communication channel).  Select the radio buttons “all Appl. Servers” and “External breakpoints already set”. Click on OK. 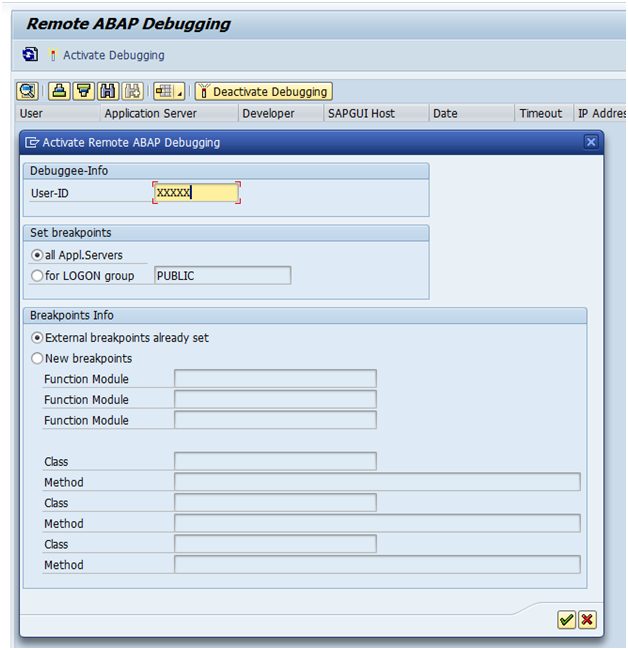 Another pop-up will be opened with a message “End debugging?” Leave the pop-up as it is. (Don’t close the transaction).

Now start sending a message from HTTP client. When the message arrives to SAP R/3 system, a debug session will be started from the point where user kept the break-point in the step-2. From this point user can start debugging the code as usual.

Thanks.. We are connecting to SAP from our MS Sharepoint and always had a hard time finding what the issue is when we encounter a problem because there was no way to debug..Will try doing this when we run into any issue next time..

it is helpful for me

Very Nice document and its very helpful. Thanks Sravan.

very helpful, thanks a lot,

For information, SRDEBUG is obsolete on "recent" ABAP releases, cf note 1766428 - Remote ABAP debugging: changed behavior (which states "Due to this technique, SRDEBUG is obsolete"), as now it can simply be achieved by adding user breakpoints directly in the ABAP code, and it's valid for all application servers.