However the documentation is rather short.

Find here a comprehensive guide how to use 1Order Event Handler for custom enhancements.

1Order Event Handler:  How to guide for customers

Note: The following document describes a very powerful way to enhance the functionality of a business transaction. Although in the formal sense the usage of the event handler is not a modification (no registry key from SAP required) the negative effects of using the event handler can be equally bad as from an actual modification. SAP is not liable for any damage caused by customer event handler entries and does not offer any standard support in case something does not work as expected or in case of unwanted functional or performance related side effects.

An alternative way to enhance the 1Order is through the 1Order BADIs such as CRM_ORDERADM_H_BADI, CRM_SALES_BADI, ORDER_SAVE BADI etc.). In certain cases these BADIs are simple to use. For example if you want to run certain code during the saving of the order then the ORDER_SAVE BADI is the easiest way to go (Using method check_before_save you can prevent the save and using method prepare you can make last minute changes to the document.) A good use case for the CRM_ORDERADM_H_BADI is when you have extended ORDERADM_H with your own field and you want to fill it dependent on one or several other ORDERADM_H fields. You can replace ORDERADM_H with any other objects in this example. (See below for an explanation what a 1Order object is.) Let’s now look at an example where the usage of the 1Order BADIs becomes a problem. Assume you have created a new field in CUSTOMER_I and you want to fill it dependent on the product of the specific line item. The first idea is to use the CUSTOMER_I BADI. However the CUSTOMER_I BADI is not guaranteed to run when the product has changed. Also inside the BADI you do not know if the product has changed so performance optimized programming becomes a problem. You could also consider implementing the ORDERADM_I BADI. In this case you can easily determine whether the product has changed but you have no access to the CUSTOMER_I fields within this BADI. For this use case there is no obvious way to solve it using the 1Order BADIs unless you can wait until the save and the ORDER_SAVE BADI can be used.

There are various fields when doing an event registration which will be explained here.

The transaction category simply defines for which kind of object the callback is relevant and should be executed. Examples for values are BUS2000115 (Sales Order) and BUS2000116 (Service Order). Value BUS20001 can be used if the callback is needed for all types of 1Order documents. (There is also the possibility in standard to influence the relevance of an event registration by customizing but this is beyond the scope of this document.) A basic thing one need to know in order to use the 1Order event handler obviously is which events there are. For this a little background information is needed:  The 1Order consists of certain so called 1Order objects. A 1Order object is basically a collection of fields which can be processed and stored together with this order. When we talk about a 1Order object we basically mean everything from the database table(s) (one for a simple objects, can be several for complex objects), the application buffer and the processing logic for this collection of field. There are flat objects which exist one time per header or item and complex objects which contain table like information (eg. partners).

A creation or change of a 1Order document in the buffer is triggered by a call of CRM_ORDER_MAINTAIN. Typical calls of CRM_ORDER_MAINTAIN can either be triggered directly by end users through a particular UI, by batch jobs or by CRM middleware. The CRM_ORDER_MAINTAIN API distributes the requested changes to the individual 1Order objects which are processing them. Further changes of individual 1Order objects are triggered indirectly by the event mechanism which is described here. For each change of a flat 1Order object there is an AFTER_CREATE (first time) or AFTER_CHANGE event raised. For many purposes it is not important to distinguish between AFTER_CREATE and AFTER_CHANGE when registering a callback for a flat object. But you need to register for both if you want to cover all changes. For complex objects there is usually a AFTER_CREATE, AFTER_CHANGE and AFTER_DELETE event. The event does not refer to the objects as a whole but to a single record of the object. For example if a new partner is added to the document an after create event is raised for that partner. As part of an AFTER_CHANGE event the before and after values (also referred to as old and new values) of the object are published. For an AFTER_CREATE event only the new value is meaningful whereas for an AFTER_DELETE event only the old value is meaningful. The old/new values allow the optimization of the callback logic by exactly checking which fields have changed (see also compression logic). The AFTER_DELETE event is also used to delete a document in the buffer (event ORDER->AFTER_DELETE) or a document item (ORDERADM_I->AFTER_DELETE). 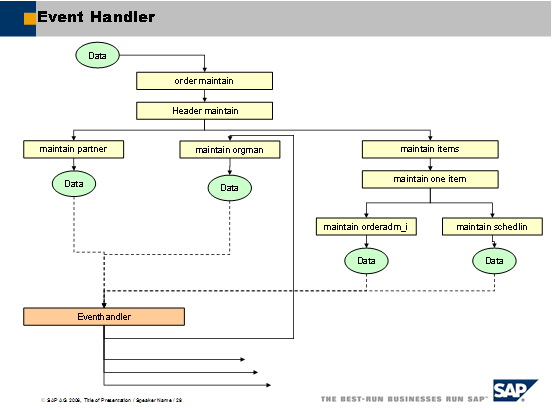 To sum up if your business logic depends on a set of fields you need to identify the 1Order object(s ) where the fields are located and then register for the relevant change events.

There are other special events which only have a meaning in a certain context.

The event is raised to allow callback functions to reject a certain change requested by the user. The event is only raised for special changes. The callback function can reject the change by raising an exception. Some of the BEFORE_CHANGE events such as PARTNER_BEFORE->CHANGE are called to decide whether a certain entry is ready for input and will run for every roundtrip. Please take this into account in your performance considerations.

There are further even more special events which are beyond the scope of this document.

IV_OBJECT_GUID: Guid of the header or item for which the event was raised

IV_OBJECT: 1Order object , for which the event was raised

IV_EXECUTION_TIME: Execution time of the event (see below)

IV_STRVAL_NEW: New values of the object (parameter has the be casted depending on the object)

IV_STRVAL_OLD: Old values of the object

The field Attribute can then be used for complex objects in the event registration to limit the registration to partner changes of a certain type (partner function type). Eg. a sold-to party has function type 0001. The possible values of the field Attribute depend on the complex object you are dealing with. For example for date changes it is the date type.

The picture shows a schematic zoom into CRM_ORDER_MAINTAIN. Events are raised by the individual 1Order objects by calling CRM_EVENT_PUBLISH_OW. The reaching of certain execution times is notified to the event handler by the general CRM_ORDER_MAINTAIN processing logic by calling function module CRM_EVENT_EXETIME_OW.

Important execution times inside CRM_ORDER_MAINTAIN are:

This execution time is only used in combination with the event INIT. Both are triggered inside function module CRM_ORDER_INITIALIZE. This event/execution time is used for clearing the data buffers. It must not be used for anything else.

This execution time is only used in combination with the event SAVE. It is triggered inside function module CRM_ORDER_SAVE. (The event SAVE is implicitly triggered by any change event such as AFTER_CREATE, AFTER_CHANGE and AFTER_DELETE). This event/execution time is intended to trigger database updates by calculating the necessary database changes and passing them to an update function module. It must not be used for anything else.

This execution time is also triggered inside CRM_ORDER_SAVE and it is used to execute final changes inside the buffer. It comes before the “Save Document” execution time. 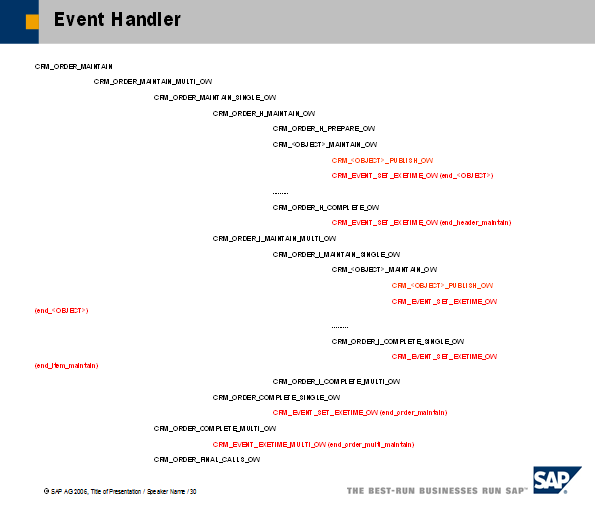 Events are always published with reference to a certain header or a certain item. In the event registration you can decide whether the registration is for header events, for item events or for both using two check boxes. This is interesting for objects which exist both on header and on item level such as partners or dates. Other objects always live either on header or on item level such as ORDERADM_H, ORDERADM_I or PRODUCT_I. In this case there is only one meaningful value for the check boxes.

A very important field for the performance tuning of the event handler is “Call Callback” which allows to implement a “compression” logic.  Compression allows you to control how often the callback is called which can be very important in terms of performance.

This is the option with no compression

In many cases this compression can be used in the same way as the option no compression without changes the callback code itself.

Using the priority you can specify the order in which callbacks for the same execution time will be executed. A higher value means a later execution. You need to worry about the priority if you depend on the result of another callback. The priority is an important field for SAP standard but often of lesser importance for customer callbacks at least at the beginning where they are not so many customer callbacks which can interfere with each other.

For completeness it shall be mentioned that there is an event trace available which can be activated with user parameter CRM_EVENT_TRACE. The result can be displayed using report CRM_EVENT_TRACE. You may find it useful to experiment but don’t feel discouraged if you find the rather huge output confusing. It is more important to focus on the concepts and to understand the events you care about. 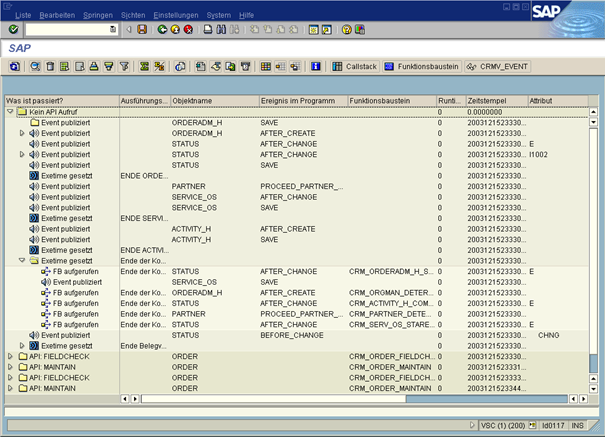 Another example is from the SAP standard itself. It is how the pricing is implemented within the 1Order. (We actually use the old pricing interface as an example here because it is easier to understand and uses standard 1Order callbacks.). It is characteristic for the pricing that it is of certain complexity and therefore should not be executed multiple times for performance reasons. On the other hand pricing may depend on many fields in different 1Order objects so many event registrations are necessary. These characteristics are typical for other functionalities as well such as ATP check. Now since pricing should run only once per CRM_ORDER_MAINTAIN the first idea would be to register it late (“End of document”) with a high compression (“Once per transaction”). However there is a problem with this strategy. With such a registration there is no information left which items actually changed or which fields for a given item changed. This means there is no basis anymore to decide for which items pricing has to run. The solution is to use a two level event approach using two callback function modules. The first function module is CRM_PRIDOC_COM_DET_PRCTYPE_EC. It is registered on all kinds of potentially pricing relevant 1Order changes and uses no compression. This means the information which item has changed and which fields of the item have changed is available inside the callback and based on this the function module can decide whether pricing needs to run for the item or not. However CRM_PRIDOC_COM_DET_PRCTYPE_EC will not actually trigger the pricing. It will remember the item for which pricing needs to run in an internal table and publish the event PRIDOC_COM->AFTER_CHANGE for the document header.  On this event function module CRM_PRIDOC_UPDATE_EC is registered with compression “Once per transaction”. This means it will be called once per CRM_ORDER_MAINTAIN and it will use internal table written by function module CRM_PRIDOC_COM_DET_PRCTYPE_EC to trigger pricing for the right items.

If you want to implement your own two level event approach you can use the object ORDER and the event TRIGGER_FUNCTION to trigger the second level event callback. In order to make sure that you do not interfere with others who are using the event TRIGGER_FUNCTION  make sure that you use a unique event attribute starting with Z such as Z_MYFUNCTION. Of course you have to publish the event yourself in the first level callback function by calling function module CRM_EVENT_PUBLISH_OW.