You’ve been hearing about it for months now and today we’ve finally flipped the switch!

We just went live this morning and already the community is buzzing inside SCN and on Twitter about the new SCN gamification platform.

The project team has been working tirelessly for months to make sure all elements worked correctly for launch this morning, everything’s been run through a barrage of tests, everyone’s aware of what’s happening and ready for it, moderators and space editors have been trained so they know what to expect and how to handle things, data has been run through data conversion routines (several times), adjustments and corrections have been made, the SCN team is up to speed, FAQs written, and all is ready to rock and roll today!

You may not have known, but the gamification system actually went live in production over 4 weeks ago.  We wanted to make sure it would run under the load and high stress of 2 million unique visitors a month.  It has been running… in fact, both the old points system and the new gamification points system have both been running together in product since that time.  We were just showing the old system, and today we start showing the new system.

When I blogged back in February about gamification coming to SCN, I mentioned that gamification is actually not new to SCN, and shared some background and history of gamification for SCN and for SAP.  Today I’ll talk a bit about some of the new elements of gamification that I think you’ll be interested to know about. 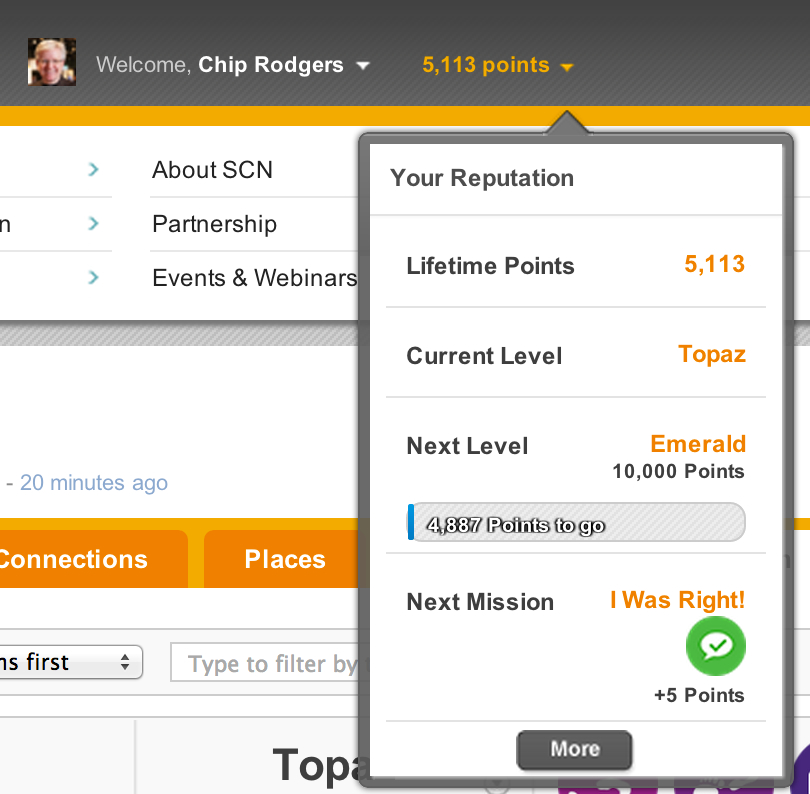 When we started SDN (now SCN) in 2003, we always measured reputation in the community based on the total number of points a member has earned since the day they joined (“lifetime points”).  But as the years passed, we saw some members that had been very active years ago, but moved into other jobs, or weren’t contributing in the same way, yet the system still showed them as top SCN contributors.  So last year when we launched the new SCN platform, we decided to base the reputation system on “12-month rolling points” in order to recognize and reward those members that were currently active in the community.  While the principle was a good idea, showing only the 12-month rolling points caused some confusion in the community (especially when members saw their points levels drop as their contributions from 12 months ago fell off their total.)

So we’re refining the approach again and starting today, we’re showing lifetime points in the masthead of SCN again!   We like this because it shows the total value of contributions you’ve made to the community.  We will still also highlight the most current contributions members make in the community and keep members interested in contributing in the moment.  All leaderboards within SCN topic areas will show 12-month rolling points – highlighting those members that are currently active in the space.  In addition, with the introduction of missions, we’ll have many new ways to keep everyone interested and motivated to keep earning more, completing more missions, and collecting those badges in your profile tab!

Since we introduced them in 2010, we’ve had Bronze, Silver, Gold, and Platinum community reputation levels for members reaching 250, 500, 1,500, and 2,500 points respectively.   That’s been great, but the four levels also had some limitations: 1) the low end of 250 points is actually a pretty high level of contribution before anyone gets any kind of recognition – we wanted to have some earlier and easier recognition levels so members could earn some status earlier and 2) we have members that have as many as 30,000 to 50,000 points – so we also wanted to create some more “exclusive” levels to recognize our superstar community members! 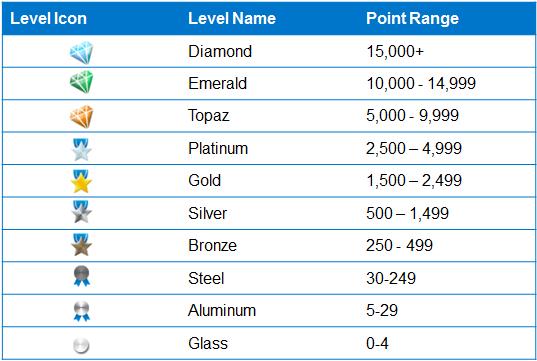 So we put our creative team in action and came up with a new set of levels.  We now have a total of 10 reputation levels.  The middle “star levels” of Bronze, Silver, Gold, and Platinum stay the same – with the same points levels and the same star-ribbon icons you’ve come to know.  But we’ve added three new levels at the lower end we call “medallion levels“ with medallion icons.  When you start as a member you’ll be in the Glass level.  As soon as you’ve completed a few easy missions, you can move to the Aluminum level with as few as 5 points.  Write a blog, answer some questions, contribute in some other way and when you earn 30 points, graduate to the Steel level.

We also added 3 new levels at the top end.  We now have three “gem levels“ at the top including Topaz at 5,000 points, Emerald at 10,000 points, and the new super-high reputation of Diamond for those with over 15,000 lifetime points!  (Today there are a total of 65 SCN community members that will be in this rarified superstar level.) 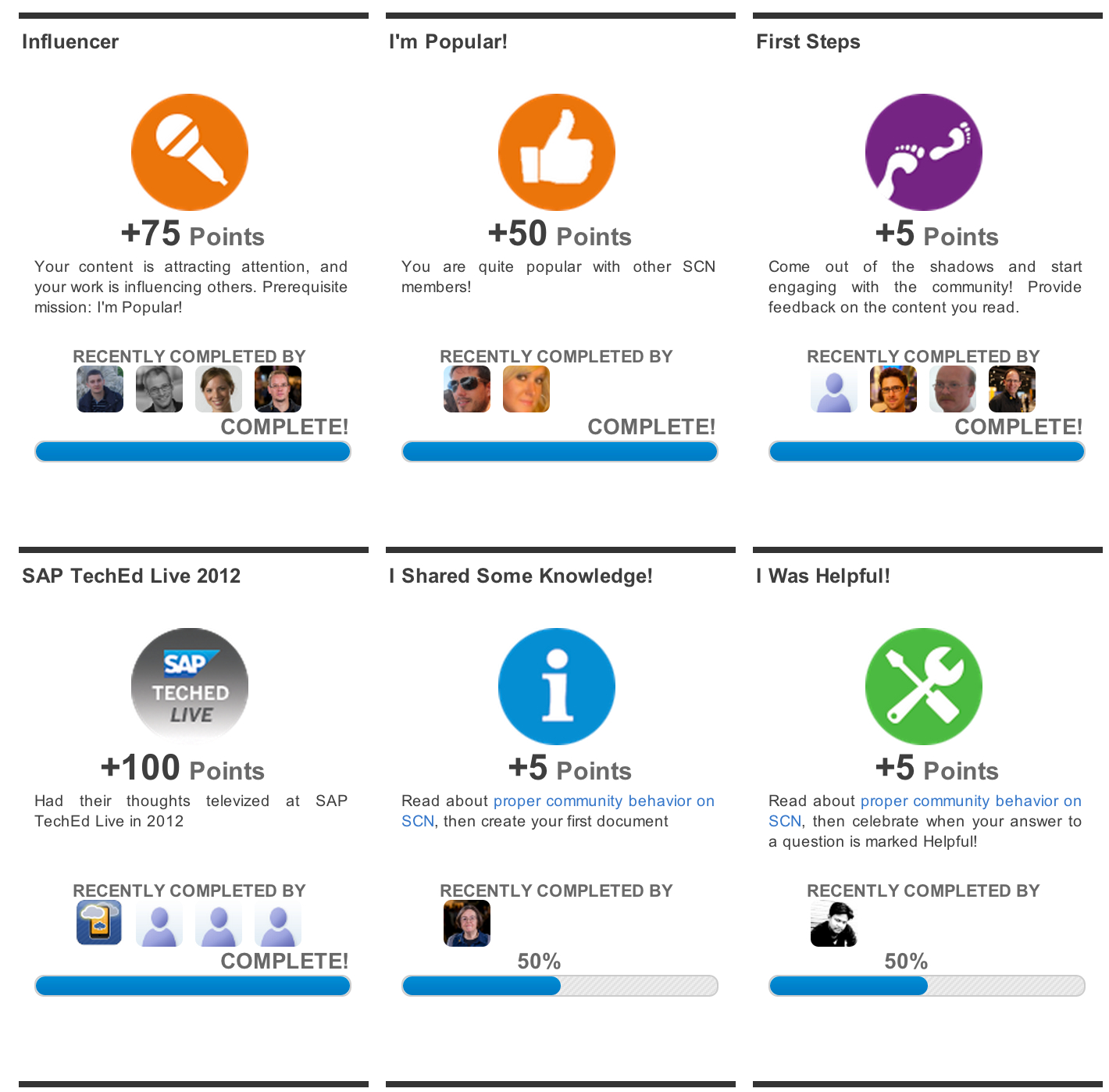 Missions are an exciting and engaging new element introduced with the gamification platform starting today.  We’ve launched with around 30 core missions you’ll learn about as you spend more time in SCN.  (For a list of all current missions, see the bottom of this gamification FAQ document.)  But the platform gives us the flexibility to add more missions over the coming weeks and months.  Today, we have missions to get members started like “I Was Here”, “First Steps”, and “Ready (Set, Go)” as well as missions for members working their way higher in the community like “Influencer”, “Storyteller” and “Answer Hero” missions for members that have a lot of followers, share a lot of great original content and contribute helpful answers in discussion forums.

In addition to our original missions, we’ll be adding more and creative missions at all levels to earn badges that will be both general missions as well as missions focused on important SCN topic areas like HANA, Analytics, Mobile, Cloud, CRM, and others.  We’ve even had suggestions from the community that we add some Easter egg missions, so you never know what kind of fun surprises we’ll have for you and other community members in the future.  All part of the now available with the gamification of SCN!

Join Us for the Launch!

Join us tomorrow (Monday, April 29) starting at 8:00am European time (2:00am ET, Sun 11:00pm PT) and over the next two days in the SCN Game Room, a virtual SAP Connect room open for two days.  The project team will be staffing the room around the clock on Monday and Tuesday. Come to the room and “hang out” with the SCN Team and other community members to ask questions, give your feedback, etc.

Thanks To So Many!

Congratulations and THANK YOU to the outstanding efforts of the gamification launch team of Laure Cetin, Jeanne Carboni, Audrey Stevenson, Oliver Kohl, Sean Yang, Krysten Bradley, as well as Johannes Unnewehr, Matthias Boehmert, Charles Carney, and Yaniv Bar with SAP IT, Mary Lahlouh and Kyle Clark with Bunchball, and Kevin Conaway and Nimi Berman with Jive.  Thanks also to our SCN Moderators and Space Editors, and our SAP Mentors who gave their time to testing over the last months and providing invaluable feedback to make this go live successful!

Here are some links and resources to learn more and connect with your inner gamer! 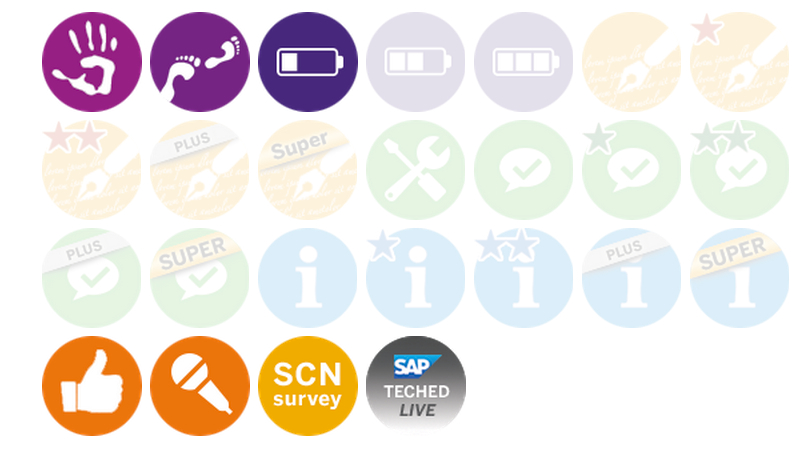 Yes the new gamification will not leave you if you once enter on it ... 🙂

Imagine that someone is thinking ahead beyond just today and planning for a future when 10,000 is just the beginning...

Hi Martin, As you can imagine, there were lively discussions about how to represent all of the levels, and several people were in favor of sapphire. However, in life, diamonds are usually more valuable. Also, we didn't want anyone to think they would get a free pass to SAPPHIRE NOW! conference when they hit that level. 😉

Nice one and nice way of sharing knowledge. It is a great DB.

I have started enjoying this !!

Just its a starting in SCN have to go long way !!

Awesome..... really looking forward to it