The new ABAP-Objects Workflow has taken over the existing concept of temporary and application exception, as it was used with BOR-based Workflows. It has been replaced by using a set of predefined exceptions within the method’s implementation.

The most commonly used exceptions are the following

You may also lookup for more exception, using the class builder and lookup the class hierarchy of CX_BO_TEMPORARY and CX_BO_APPLICATION, that are the two top-classes for the ABAP-OO Workflow Exceptions.

To use one of the given classes, you can just defined them in the “Exception” definition of the method.

The simplest way to make use of the feature that you’ve just created, is like this

With the BOR-based implementation, you had to define each exception with reference to a message-ID. This message-ID, including the four variables sy-msgv1,… were then displayed in the workflow log, and under the “Message” button of the workitem, which is a very nice feature, as you can provide more detailed information othen than just saying “There was some kind of error, and you could recover it, because it’s possibly temporary”. 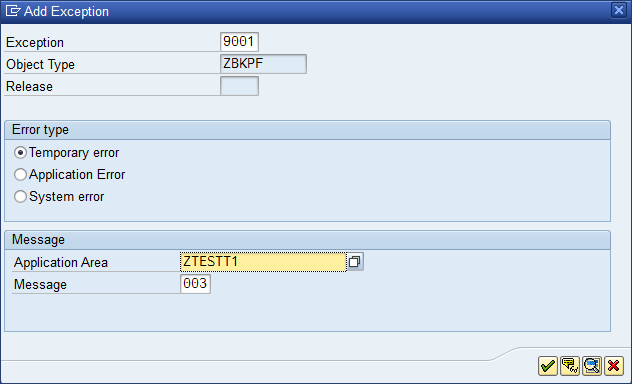 And by raising the exception, you could pass more information to the workflow log.

With the ABAP-OO implementation, this has become a bit more complicated, but once you’re through with it, it becomes fairly easy.

I do not repeat the common basis to define the outcomes in the step definition, how to create an ABAP-OO-Workflow class and so forth. Please read through the SCN, documentation or visit BIT611 for more information on that general topic.

You can use the predefined classes and populate them with your own “text element” to have some more information displayed to the end user or the administration. The first – simplest – approach is, to create a new textID in the repository and use that, when raising the exception.

Then fill in the screen for a new concept, which becomes the TEXTID later on. The field “Object Type” needs to be filled, but it’s pretty much useless here.

Please read through the documentation of the transaction to find out, how to translate the object into other languages, create a transport request, and so on. 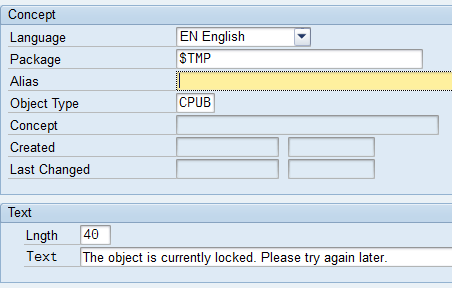 After you’ve created the new concept, you’ll get a new GUID, which I would suggest to save it into a class constant.

To make use of this custom text within the exception handling of the workflow, you can simply use the following ABAP:

However, sometimes, that not just enough. … and the story continues …

To make text replacements for the text of the exception class, there’re two general approaches possible: Using a TEXTID based exception or a MESSAGE based exception. In the following section I will outline how to implement this with a TEXTID.

Create a new subclass of the exception type, you need, e.g. a temporary exception. So create a new class ZCX_TEMPORARY_WITH_TEXT, inheritingfrom CX_BO_TEMPORARY. Please be aware, that the exception class name must begin with ZCX…, YCX… or /<namespace>/CX…

After activation of the class, a new attribute is generated, which will be the default textID when the exception class is instantiated:

With some newer ECC-Release a new button appears here “Message Text” appears here, where you can assign a MESSAGE ID, and furthermore, thanks to the note from Mike (see comment section below), if you edit the long text here, you do not need to go to the SOTR_EDIT transaction.

Create new member attributes for that class, as you like. In this example: USERNAME. It must be the same naming as you’re using between the & and & of the text element.

The usage is now a bit different. So first of all, you need to list the exception in the method signature, of course:

And you cannot use the shortcut ABAP statement anymore, because you will need the following three steps:

– Assign the text elements before raising the exception

“All text elements embraced by & will be replaced by instance attributes

or use this shortcut, as for each attribute an importing parameter will be generated for the CONSTRUCTOR, that can’t be changed otherwise. If you need to fill more tricky values, you need to use the proposed solution above.

And this is really an improvement, when comparing it with the default text:

It’s some work, but it’s very nice to use, when you got there.

Thanks to the comment of Jocelyn, I’ve added the part to populate a message-ID to an exception and raise that. However, I didn’t find any substance need to modify/enhance the exception’s constructor. It’s working without any coding (changes). 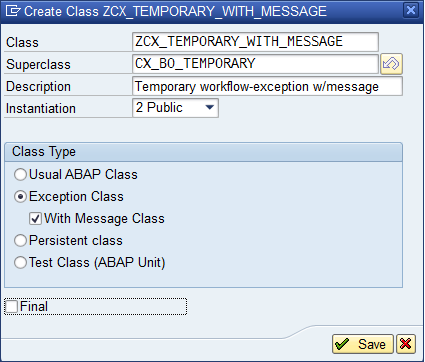 After that, activate the new class. You don’t need to make any changes in the subtyped exception class.

There’s no additional coding except to correctly raise that message. In my example, I chose to set the message WF 015 “Cancelled by user”:

MESSAGE I015(WF) INTO lv_message_text.     “For where-used list and SY variables

After that, you can find a temporary exception in your workflow log with  the detailed message!

Any helpful comments are very welcome.

Please “rate” or “like” if you find this information useful.

Update 2: Changed a paragraph at the end, explaining that an existing CX_BO_TEMPORARY exception signature doesn’t need to be changed.

Update 3: Included comment from Mike regarding the message texting.

Another excellent blog!  Keep on blogging 🙂

Useful information.  I plan to use it soon.  Thanks for sharing.

BTW atsome sites we've taken this a step further and played around with the constructor coding of the custom exception class. This is quite useful e.g. if you want to pass across standard message formats (with message number, class, variables 1-4) and then extract the T100 message and replace variables in the format before adding it to the workflow log.   Very similar to what you have done... just needs a little extra coding in the constructor method and that's all.

Nice.  Behind the Exception Class Text is a Long Text, that you can also add Class Attributes into.  I thought this would be a great place to put a table of messages returned from the Task thats just Raised the Exception.  My problem is, that although in the Wf Log I can see the Text in a popup as you presented here, what I could not see was the Long text.  Did you find a way of presenting the Long Text?

That's an interesting requirement, and I've an idea, and also posted another blog to address a different approach.

I would suggest to go through the E-Messages returned by the BAPI, pick up the very first one and create an Exception-Object based on that Message-ID. So the BAPI message becomes itself the exception message of the workitem.

I have described that in section "Variant 2".

Another approach could be to populate the technical workflow protocol with the returned messages (you could have a many entries there you need), and then raise the exception. So instead of storing the information into the container, you store it in the protocol instead.

Please see here, how this is done:

With the very best wishes,

Thanks Florin! This is a really helpful and well-written document.

I was just playing with the CX_BO_TEMPORARY for the first time (normally I have used the CX_BO_ERROR if/when necessary). I never actually thought that the temporary errors will keep the workflow in process status. This is really useful e.g. when someone has locked the object being changed. No need to set the workflow into error status. Just let it try again when RSWWERRE runs again.

Useful blog. One thing I'd like to add is that you don't need to mess around with OTR, this is all done automatically: When you add text IDs, e.g. SOMETHING_BROKEN, as you noted, a corresponding constant SOMETHING_BROKEN will be created. When you edit the long text, it will create the OTR entries.

Upon raising the exception, you then just use the constant to specify the text ID, as in: 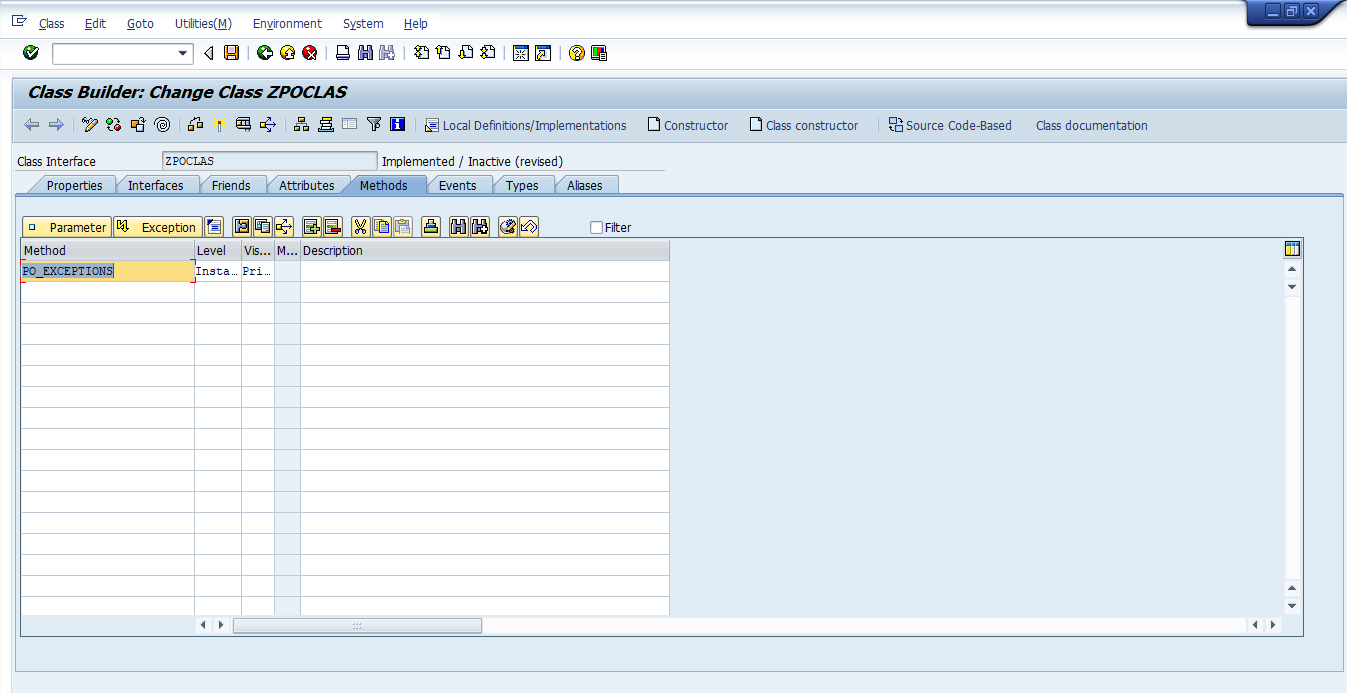 I have one requirement florin . Actually i have one class in that i have one method poexceptions. in that i need handle exceptions for all po exceptions like invalid po and NO PO number etc. so here may i know what should i add in parameters tab is it necessary to add parameter point to po number? and what should add in exceptions tab of class. could you please expalin me clearly as i am new to this  multiple exceptions in method. could u plz expalin like say class zcls and metos po exceptios  parmaters u can take soem example. please help me.

does anyone know if there is such thing like a RESUMEABLE exception for workflows?

I have a workflow that sends an email in a backgrond step via CL_BCS. After that, there is a dialog step which creates a workitem in the users SWBP.

When the Email creation fails because of missing Emailaddress in the user master, I want this logged in the WF log, so I am raising an exception.

Unfortunately, the workflow stops there. I would like it to continue and create a workitem in the users SBWP anyway because the Email is not so critical to the process.

Just model the exception as an outcome.

thank you very much for this very helpful and excellent blog.

We have implemented Variant 2 - Using exception with message class. It works fine. However, when the batch job SWWERRE has performed its 3rd attempt, the own message is replaced by WL038 (Work item set to error following 03 failed attempts) in the Work Item Display screen ("Display Message" button and in tab strip Message). (We are on SAPKA74011).

Perhaps there is already another blog for how to prevent the own message from being replaced in the more user friendly Work Item Display?

the messages here are feeding the very detailed technical log, in its first place.

I wasn't even aware of, that a workitem, which is not yet completed, can show such a message in the technical-view.

If that's the case, the technical-view-button will give you the last error message on that work-item. And if the RSWWERRE failed to execute the batch-item, well, wouldn't that be interesting to the user, too?

Meanwhile I've found out accidently, how to turn the messages from a red-light into a yellow warning-message style, which is very nice, ... and also how to display a piece of the text directly into the log.

Thx for your feedback, ... it's very appreciated

sorry, I was mixing this up with my blog for the individual entries in the detailed protocol.http://scn.sap.com/community/bpm/business-workflow/blog/2013/06/19/how-to-create-individual-entries-in-the-technical-workflow-protocol

For your requirement I can say: Only the last (error) message will be presented to the user. If the execution failed three times regarding the RSWWERRE, this will be the messages that goes to the user.

Thanks Florin for this very helpful blog.

2. Define your custom Errors under TEXTS tab in these sub-classes:
e.g.
Exception ID = DLI_MAINT_ERROR
Text = Distribution Lists not maintained in ZTWFEXPRBILSO for &INDX1&

3. Enter them under the Exceptions tab of method:

You just need to define these classes once and they can be reused across multiple methods and workflows.

Thanks a lot. Very useful 🙂