I just returned from Kraków (Cracow, Poland), where I had a pleasure to attend Mobile Mobile Conference. Well well done.

What did analytics guy focused mostly on Big Data and Fast Data (and Deep Data and Long Data and You-name-it Data) do at the melting pot of mobile developers and designers from around the world? Well, I’ve been following what’s going on in the mobile world for quite some time. The development of mobile technologies drives requirements for real-time data management, like this delivered by SAP HANA. Interestingly enough recently one student shared with me that his professor had stated “There is no business application with sub-seconds response requirements”. Seems this professor has not used any mobile device. Otherwise he would know that mobile apps reduced expectations for response times to a few seconds.

It is not your granpa[1]’s desktop PC anymore that you leave at the desk to process a report while you’re enjoying infamous “cup of coffee”.

The mobile development is currently dominated by consumer market, “consumerization of IT” in enterprises is driven by exactly the same force. Except of may be 2 Ps of marketing – Price and Promotion, – all other aspects of mobile apps business remain the same for both consumer and business markets. From that perspective the majority of sessions at MM Conf should have satisfied both camps of mobile professionals. The mix of topics and presenters was excellent to cover the area comprehensively yet without overlaps:

These topic-focused sessions were nicely enriched by

Small comment is that most of speakers were from the US, and not all cultural and market references were applicable to Europe. I hardly know any developer in Eastern Europe coding over a coffee in Starbucks… On the other hand, it was a unique chance for European developers to understand American way by listening and talking to presenters. And without need to spend $2000 for a trip over Atlantic.

The secret sauce of this successwas the team from Applicake. Guys reapplied same principles as at their already flagship Railsberry event. And if I can share the secret it was the treat of participant in every aspect: accompany informative (yet comfortably short!) sessions with long-enough breaks (for networking), nerdy location (Museum of Municipal Engineering in this case), yummy food (and not forgetting vegans), chilling zone (with comfy seating), fun activities (enriched with Spotify on site), insane gadgets (nerds underwear, anyone?). Have I missed anything on this list? Yup… Sunny weather. Well well done, Mobile Mobile conference! 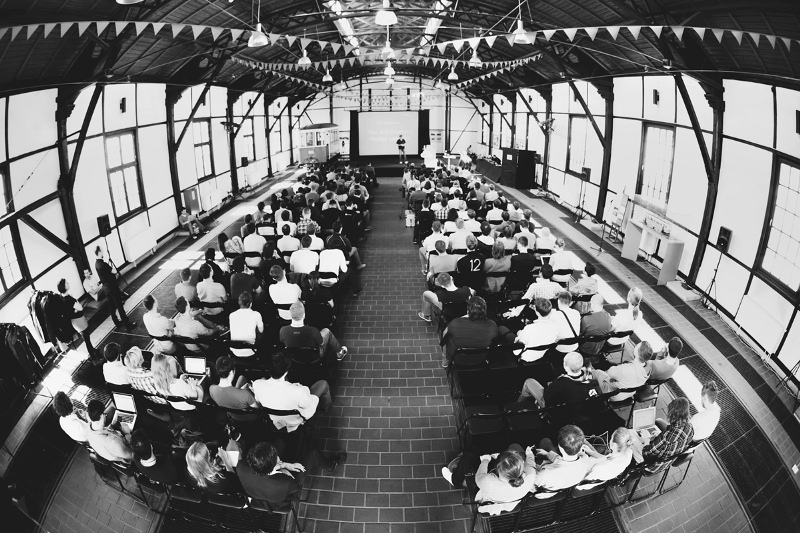 [1] Actually I must categorize myself as one of these “granpas”. During a discussion with one of recently-out-of-college developers I mentioned that it’s always nice to have a game corner with Ataris and Commodores at technical conferences. He looked at me and asked “What is atari?”

re[1], how about some 'Odra's? i didn't have a chance to work on them, but my better half did some simplex linear programming on them way back when.

I never used Odra. I think my TU Wrocław still had them when I started my studies, but I had to use non-Polish PC and MS DOS 5 with Turbo Pascal at university at that time already.