One of the great things about YouTube and other video sites is that it serves as a collective memory bank for old movie clips, tv shows, commercials and other memories from your past. Just for fun, I’m starting a blog series titled “YouTube Hall of Fame” which will feature topics related to technology, marketing and SAP. I’m blatantly stealing this idea from Grantland (a popular sports & pop culture blog) but it’s a lot of fun to write and I hope you enjoy it and contribute your favorite YouTube moments.

With the cellphone turning 40 this month, I thought I’d pull together a Top 5 list of my favorite mobile phone scenes from TV and movies. Needless to say, we’ve come a long way in 40 years. Enjoy!

It doesn’t get much better than Gordon Gekko wearing a robe, on the beach, and yelling into a 1980’s brick phone. Skip to 0:54 for the glorious moment:

Remember Don Adams as Maxwell Smart, Agent 86? Get Smart was a hilarious spoof of spy movies, and one of Smart’s trademark gadgets was a phone disguised as a shoe! I forgot that the initial episodes of this show were in black and white, which shows how old (or ahead of it’s time?) it really was. Skip to the 1:00 minute mark for the unveiling:

Speaking of spy movies, this list wouldn’t be complete without Mr. Bond. His mobile phone is slightly more advanced than the Get Smart version.

Even hardcore fans of the TV show Lost may not realize this, but in the scene where they finally make contact with the outside world, Jack Shepard uses a mobile device which, if you look closely, has the user interface of the original iPhone…before it was released. Given that Lost was an ABC show, which is owned by Disney, which owns Pixar, I could see them putting this little easter egg in there for fun. Check out the first couple seconds of this scene and pause it:

…and here’s a still shot of it. Look familiar? 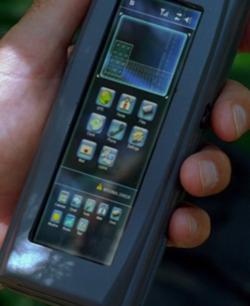 Okay I’m cheating here since this is obviously a pay phone, which is sort-of-but-not-really a “mobile” phone since it allowed you to make calls outside of your home or office. But c’mon, it’s Superman! And since the new film Man of Steel is being released soon, let’s finish with the original Christopher Reeve version.

So that’s my list. What’s yours? Feel free to add other mobile phone scenes in the Comments section (or tweet me @ChrisKimSAP).

I love the Get Smart shoe phone the best.  Such a classic show.  Who knew?

The Star Trek communicator - we talked about that yesterday.

What about shows that could've used a mobile phone, such as Gilligan's Island?  🙂

Ahh good question! A lot of Seinfeld episodes could've used a cell phone, since many of them were based on them not finding each other at a movie theater, parking lot, etc. I'll try to think of some more!

So would Jerry Maguire's famous Show Me the Money scene count as a mobile phone scene?

Thanks for the additions Tammy! Here are a few more I received via Twitter: