I was trying to understand the SAP BI Accelerator Concept and its benefits and shortcomings. I have understood quite a bit and would like to share this information with all the users. I hope this would be helpful.

I will try to divide the information into topics.

The BI Accelerator is a new approach for enhancing SAP Net Weaver BI performance based on SAP’s search and classification engine TREX, and on preconfigured hardware delivered by SAP hardware partners. It is packaged as an appliance for use with SAP Net Weaver Business Intelligence (BI) and provides enhanced performance for OLAP in an Enterprise Data Warehousing IT scenario.

A TREX aggregation engine for processing structured business data enhances the performance. The data from the BI Info Cubes is indexed in the BI Accelerator and stored as TREX indexes in its storage subsystem. The BIA indexes are loaded into memory and used to answer OLAP queries entirely in memory. The BI Accelerator clearly reduces the response time, especially for large data volumes. SAP Net Weaver BI customers adopting the BI Accelerator can expect significant improvements in query performance through in-memory data compression and horizontal and vertical data partitioning, with near zero administrative overhead. Since BI Accelerator is delivered to the customer as a preinstalled and preconfigured system on dedicated hardware as a BI Accelerator box, the installation and initial configuration has been done by the hardware partner and no additional administrative tasks need to be done by the customer for the first usage of the BI Accelerator.

The following figure depicts the BI Accelerator architecture and its relationship with the BI system: 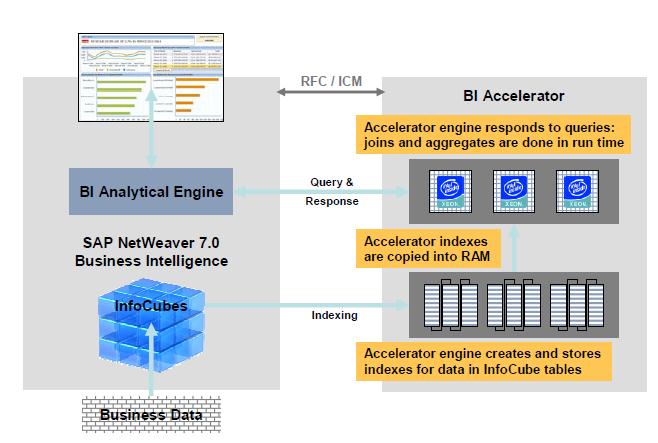 The BI Accelerator is installed on a preconfigured blade system. A blade system consists of hosts in the form of server blades. The server blades are connected to central disk storage. This is referred to here as a file server, regardless of the underlying hardware.

· Data is loaded from source systems into an SAP Info Cube.

· An index is built for this Info Cube and stored inside the BI accelerator appliance.

· BI accelerator indexes are loaded into memory where the query is processed. In memory, joins and aggregations are

done at run time. Loading of indexes into memory happens automatically at first query request, or it can be set for

preloading whenever new data is loaded.

· At run time, query requests are sent to the analytic engine, which reroutes the query to the BI accelerator.

· Query results are returned to the end-user application.

· Query is launched from SAP Business Explorer (BEX) or a third-party BI tool.

· Query evaluates whether there is a precalculated data set (usually calculated during off-hours). If one exists, the query retrieves

data from that data set.

· If a precalculated template does not exist, the query checks the OLAP Cache for the necessary data. The OLAP Cache

doesn’t benefit the first person launching the query, but will benefit all subsequent requests for that same query.

· If the required data does not exist in the OLAP Cache, then the query looks for aggregate tables or materialized views that may

exist. These pre aggregated views are not as fast as processing the query against precalculated data sets or OLAP Cache,

but they are still faster than going against the final layer, the Info  Provider.

· The final option to execute the query is to run it against the Info Provider, in this case the SAP Info Cube. This results in the

slowest processing times as compared to the other three choices listed above.

Executing the same query with SAP BI accelerator results in a somewhat different set of steps:

· The first three steps remain the same (i.e., the query first checks if there is a precalculated data set and then checks the

· However, if neither of these options exists, the query checks if the BI accelerator option is available. In this case, the slowest

options of using aggregates or the Info Cube itself are eliminated. Instead, the BI accelerator processing as described above kicks in.

· Faster load times, as aggregate change runs due to master data changes are handled by the BI accelerator rather than on top

o   BI Accelerator may eliminate the need to deal with an OLAP Cache.

o   BI Accelerator may decrease the need for logical partitioning on BI side.

o   BI Accelerator results in less planning and tuning on the part of DBAs.

· Currently the data source for BI accelerator can only be an SAP Info Cube. It does not work with other SAP data sources such

· There’s currently a one-to-one relationship between an instance of SAP BI and a BI accelerator. Sharing of multiple SAP BI

instances with a single BI accelerator is not yet supported.

· There is currently no failover mechanism for BI accelerator (i.e., if the system goes down, the indexes will have to be rebuilt

from beginning). However, this is unlikely to be a very time-consuming task due to the search paradigm involved.