Gartner BPM Conference – will never be the same – day three

For me, capturing the last day of a conference has proven challenging. It’s now 10 days since the 2013 Gartner Business Process Management Summit ended, yet I’ve not committed this post yet. As in days one and two, I took copious notes and photos, yet somehow the combination of the lack of momentum and tasks deferred led to delay. My hope is the time between may have generated a bit of perspective on the event, compared to the immediacy of posting the same day. You readers must decide.

Session – The Quest for Engagement – A Gamification Challenge

Maybe it’s telling that my browser flags “gamification” as a misspelled word (what would auto-correct do?), as the concept of adding “play” features to work processes is both novel and controversial. Elise Olding did spectacular work framing the topic in serious terms, yet weaving in reward concepts, giving away prizes (e.g., see Image 1) for asking questions. To illustrate the random aspects of game theory, one must have asked the question according to the stated rules, but an unwritten (unpublished) rule was awards were only made on sequence number matching a list.

Elise displayed an image of one classic recognition – the Employee of the Month parking space – that illustrates gamification. Other examples she mentioned included workplace safety (“N days since an accident”), and one more applicable to the software world, the Microsoft Language Quality Game, where international teams competed to improve help message content. According to Elsie, the relatively small Japanese team took top honors, demonstrating that team size was not a factor, and culture might be.

A couple firms she referenced (both of which say they’re number one on the respective web sites – maybe they play by different rules):

The latter name reminds me of both the ribbons distributed at ASUG/Sapphre/TechEd conferences (who wins for most ribbons, most obscure, etc.?) and the icons on SCN assigned to specific accomplishments or efforts (i.e.,

My question (for which I won the occasional light-up, unintelligible sounding clown face pen in Image 1), was on cheating.  As an SCN Moderator, I see the backroom efforts to keep the “playing field” level in the current recognition system. I’m also looking ahead to the previously announced Gamification phase here (see: Game On!   #Gamification Coming to #SCN (SAP Community Network), Talking about gamification, Gamification Workshops, and the eponymous SAP Gamification). Elise responded with comments on fairness, design (think, create, revise), crowd-sourcing, and a culture of accountability. One that stuck with me was characterizing “heroism” as a negative factor (“Billy Don’t Be a Hero“), in that solo risk-taking/star-seeking could interfere with the team-building and socialization goals of a community.

“Change so game fatigue does not set in” – Elise altered the rules of her “ask-a-question” presentation game, requiring the word “banana” to be stated in addition to the original terms of name and company, demonstrating the sense of keeping the scope fresh. As with the move underway to a new SCN gamification, these changes must be carefully designed, fully communicated, and regularly evaluated for impact. I would think change for change sake is a bad idea; keeping people involved, and altering their participation are good ideas. We’ll need to see how well SAP pulls this off. I’ve been in a few conversations on this, and have missed others dues to conflicts.  Whatever the rules turn out to be, I think I will keep writing blogs here.

Billed as an “interactive discussion”, this session met that capably, with but one slide on the screen during the majority of the time. Arranged as a casual interview, Ian Gotts and Tommy Richardson spoke about a Siemens software product built using TIBCO’s tools. One example discussed (and demoed in a Flash video) was on hospital procedures around “MRSA”, which I needed to Google – “Methicillin-resistant Staphylococcus Aureus“. In business process terms, the treatment, isolation, and related phases need to be modeled, and that model needs to evolve based on metrics (“evidence-based medicine”); good software tools make this effort easier, faster, and more reliable. So the dialogue said.

There were good audience questions here, particularly around the staffing requirements – is the software to the point where IT does not need to be involved, how much IT do doctors need to know, and how much medicine does IT need to know, as well as how would smaller units administer this technology.

I can relate to the comment that “Doctors are smart people, they don’t like computers telling them what to do”, as it’s much a question of trusting instinct as trusting the code. Medical practitioners are trained for years; maybe what was taught a decade or more ago has evolved.  Will “big data” help or hurt this field? I expect the next generation medical college graduates to be totally digital citizens, able to leverage technology far better than the rest of raised before this was so pervasive.

Image 3 below is from the video.

“The only place where Automation is ahead of Discovery… in the dictionary.”

Session – Analyze your IT budget to identify savings opportunities

Jo Ann Rosenberger led the final session of the conference, with end-users only allowed. This one is as tricky to write about in a public space as is theone-on-one I had with Jo Ann the day before. As an employee of a company using enterprise software, it’s not in my best interest to discuss ways of “lowering the bill” out loud. I’ll touch on general concepts, rather than margins or profits.

You should look at your software portfolio for obsolete, redundant, or over-priced code.

I’ve been through this exercise, and know some of the challenges – finding all the bills, contracts, and fine print, knowing what people actually use vs what was purchased, and understating “work-alikes”. As one example, suppose you had an entire suite of software (a “site license”) and needed a third-party add-on that costs extra. What users need this?  How do you find out?  How do you measure use so that if there are runtime licenses instead of developer, you get the right deal?  Will “cloud” fix this, or obscure the picture?

One of the research results we saw was a list of which vendors were reported as conducting the most audits. With detailed terms such as underlying hardware constraints, user count allowances, and entity restrictions written into agreements, it’s not hard to see how these may be overlooked later by those managing the deployments. Having been involved in an audit, I understand the pain imposed when a vendor springs these on a customer, sending in junior accounting types to verify the letter of the contract. That they don’t know how the software works is an understatement. I think the takeaway here was not if, but when.

There are ways to push back

I just can’t tell you what they are.

If it takes me a long time (hours, days, weeks) to post something, Sandy Kemsley accomplishes this in seconds or minutes. She’ll post a blog during or immediately after a session.  I am just in awe at this massive parallel processing effort.  Her tweets during the conference:

Finally, Sandy and others had this conversation online.  Portions redacted to fit the SCN rules:

p.s. Help Sandy get to SAP conferences – read this: http://www.column2.com/2013/04/maintaining-ethical-standards-as-an-industry-analyst-and-enterprise-consultant/

After a week back in the office after a business process summit, what stands out for me?  Stray thoughts: 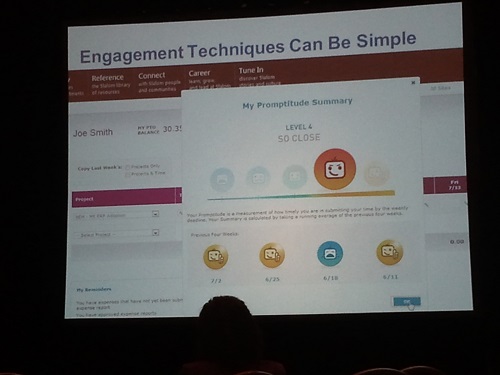 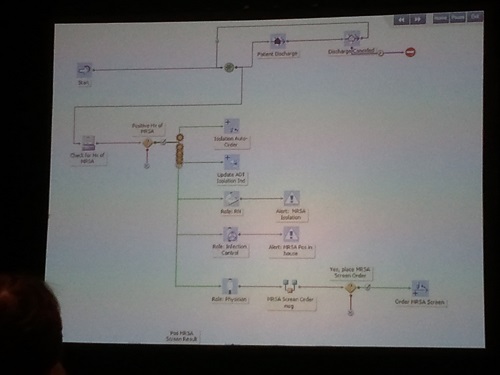