ABAP development in ECLIPSE! what is it?

Being an old timer and having worked for quite a long time with ABAP, it was with disbelief that I first downloaded the ECLIPSE studio and installed all the Add-ons for ABAP. Installing this new toolkit and tried to connect to the ABAP 7.3 server we just installed. I wasn’t sure how I could access all the artifacts stored on App server from a desktop based IDE (we all know how robust the editor on the App server is.. always felt that it was much better than local IDEs) . But, once I was able to connect to the system and started accessing the existing programs and developing new programs I was feeling better.

Here are my observations and thought on a few initial questions you may have while switching from SE38 editor to ECLIPSE!

Like you add multiple systems to the SAP logon pad, the Eclipse IDE allows you to add any number of ABAP systems.

Integrity of the object source code is maintained by ensuring the object is locked against the user editing it. Thus any clashes with editing the object via SAP GUI and Eclipse parallel are prevented.

The ECLIPSE IDE is quite trendy and offers most of  the features of the ABAP editor such as key-word highlight, auto-fill the keyword, formatting and indentation, F1-help for keywords. Setting break-points and debugging features are as well available.

An other interesting feature is the ability to launch the object in SAP GUI from within ECLIPSE. This feature is quite helpful for those, who want to take some more time before completely switching to ECLIPSE. Also, this feature is useful for designing the traditional ABPA Dynpro’s.

However, looks like objects such as Scripts and Smartforms are not supported by this IDE. For these, you still have to use the traditional SAP GUI. Implicit enhancements is another missing feature. Though there ar ea  few minor glitches here and there  such as not being able to generate automatically the sub-routine signature, still this is a refreshing new look.

On the whole, this new Eclipse based IDEis a step into the future. A ‘one stop place’ to create all the repository objects. This resembles the SE80 we are used to in the SAP GUI, 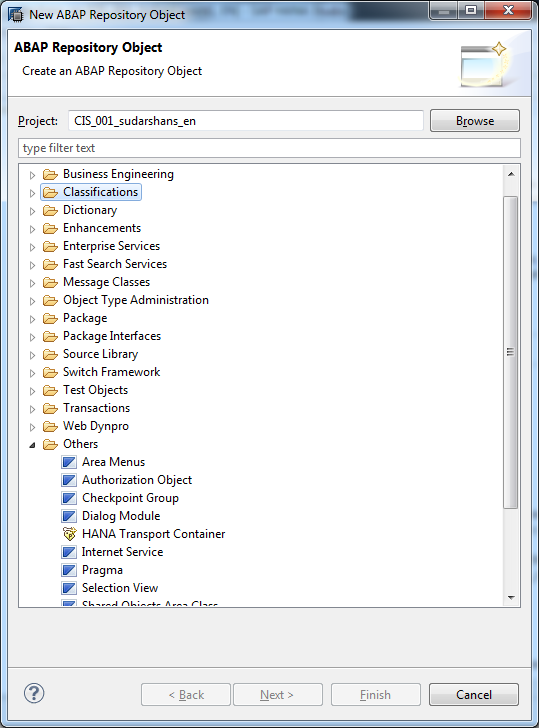 I am yet to figure out how to work offline with the ABAP objects and will share my observations on the methodology and pros and cons.)

But, for now when I simulated this by opening a package in ECLIPSE and disconnected the network, I wasn’t able to access any other un-opened objects or save changes made to the object being edited.

Would have liked the option to check-out and check-in the objects required for my build.

Looks like for ABAP developers, working offline is still some distance away.

Transport management is integrated into the Eclipse editor, if a program is created in a transportable package (not $TMP), the tool prompts you to either add the modification to an existing transport or to create a new transport.

5.      Can I continue doing my RICEF objects through ABAP in ECLIPSE?

As mentioned above, other than Scripts and smartforms, all other object types you develop in SAP GUI seem to be available here. Enhancements to SAP objects is another aspect that is not available.

The ADT (ABAP Development Tools) can be inserted as add-ons in the  HANA studio thus allowing the developer to navigate to between the HANA modeler and ABAP perspectives. With SOH being the future, this will give great flexibility to the developers in consuming the HANA artifacts from ABAP.

Next will share my feedback on the debugging and unit testing via ECLIPSE.