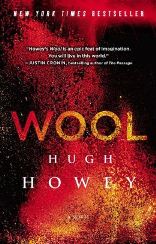 Digitalization is arguably the most cataclysmic event in the history of the written word since Johannes Gutenberg invented the printing press in 1450. In fact, the advent of self-published eBooks has sparked an eerily similar struggle over control and ownership as in centuries past. People espousing open information are increasingly under fire from governments. Major academic and industry institutions are neck deep in public policy debates and dilemmas, while lawsuits and jail sentences abound.

Meantime, self-published authors like Hugh Howey, (click herefor the official eBook trailer of his post-apocalyptic thriller “Wool”), are not only selling millions but cutting publishers out of online profits. After self-publishing “Wool” in serial format two years ago and selling half a million copies, Howey negotiated an unprecedented deal with Simon & Schuster to keep the e-book rights while the company gets the print publishing rights. Here’s what he recently told the Wall Street Journal:

“I had made seven figures on my own, so it was easy to walk away,” says Mr. Howey, 37, a college dropout who worked as a yacht captain, a roofer and a bookseller before he started self-publishing. “I thought, ‘How are you guys going to sell six times what I’m selling now?’ “

Self-published titles made up 25% of the top-selling books on Amazon in 2012. And publishers and libraries are exploring a brave new world of content creation and distribution that disrupts not just business models, but the very concept of how we share ideas, facts, and fiction on the printed page. I talked with Leone Cole, Director of the Watertown Free Public Library in Massachusetts, who summed up the situation like this:

“Top publishers may fight all of the changes, but the success of Wool as an independently published eBook has to have them all a bit nervous about the future. At the same time, libraries need to figure out how we can make all of this content available to our users as digital content proliferates. Also, we don’t want to have a situation where our digital have-nots only have access to print resources when so much is being published electronically. Howey could have easily decided that he wasn’t going to go the print route at all.”

Indeed, the digital divide cannot be dismissed. While most developed and some developing countries boast online access rates of 70 percent or more, the latest internet user statistics offer a sobering look at what percentage of the world’s population actually have the connectivity to read an eBook. Here’s a random list of internet access levels by country:

It took decades for cars to replace horses, electricity to replace candles, and indoor plumbing to replace outhouses. Since the internet was just introduced in the 1990s, we have another decade or two to complete the transition to the digitized age. Meantime, early movers have the advantage. Howey just sold the film rights of “Wool” to “Alien” producer Ridley Scott. Can an eBook sequel be far behind?