But during this extended outage, an interesting phenomenon occurred.  SMS traffic surged – a lot.  We at SAP Mobile Services sit in the unique position to be able to easily visualize such SMS traffic surges and do frequently share the impact that certain events have on SMS traffic.  After all, we directly route and deliver a significant portion of the US domestic traffic as well as a majority of the international country to country traffic.

Love or hate Apple, they were smart enough to include the ability to “fall-back” to SMS for iOS to iOS messaging as well as iOS to non-iOS messaging.  Yesterday that paid off as messages were still delivered, even though, heaven forbid, they were delivered as SMS.  Now for the fun part.  During the outage we were able to more clearly see just how much iMessage had cannibalized SMS messaging.  The short answer is, on average, around 20%.

For the US market, where we provide domestic interoperability services, the hourly traffic increases were   14%, 19%, 16%, 16% increases for hours 16, 17, 18, and 19 (EDT US).  These were the four full hours that iMessage was down. For Canada, where we provide some partial domestic and international interoperability services, the increases were 22%, 34%, 27%, 26% for the hours 16, 17, 18, and 19.  We noticed that higher percentages were due to international texters that would be more likely to use a smartphone or iPhone and don’t necessarily fully reflect how much iMessage has actually cannibalized SMS.  Not  surprisingly, the US/Canadian NUVOs (OTT, but SMS-interoperable service providers) did not show such traffic surges during the hours in question.

The table below shows the SMS impact that the iMessage outage had on SMS traffic in a small selection of countries around the world.  As I noted previously, with the exception of the USA and Canada, the other countries represent international traffic increases – some very dramatic like South Korea. 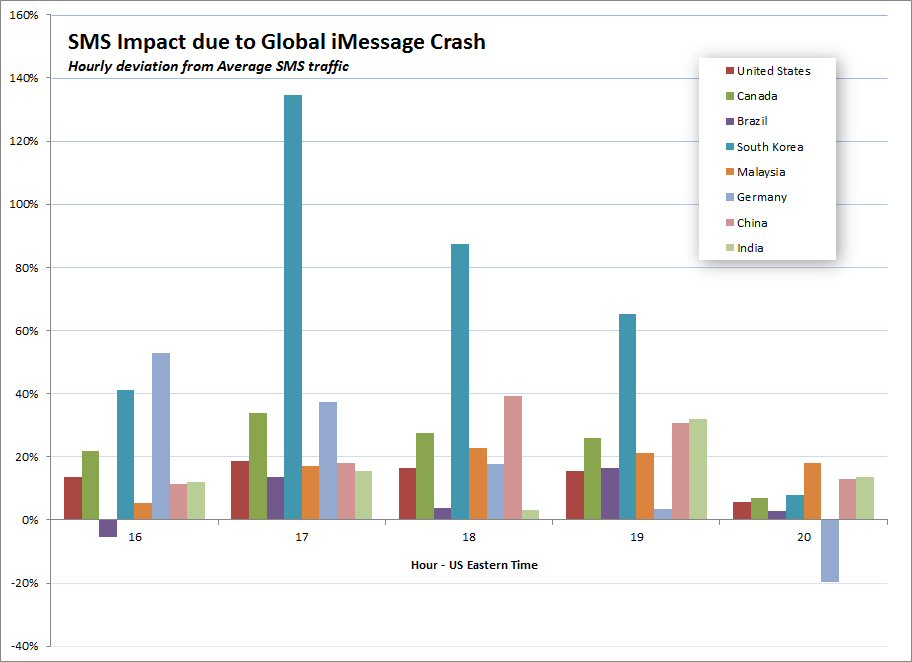 These results clearly show that despite the iMessage outage, that SMS persevered and all SMS ecosystem parties – from inter-operator service providers, such as ourselves, to the mobile operators all continued, without interruption, to enable global SMS to flow freely to all destinations.