Carbon capture, in the form of “artificial trees”, is one idea explored in the BBC Two documentary Five Ways To Save The World. But could these extraordinary machines help to mitigate our excessive burning of fossil fuels and its consequence, global warming?

In 2006, more than 29 billion tonnes of carbon dioxide was pumped into the atmosphere. And 80% of the world’s energy supply still relies on fossil fuels.

New York resident and geo-physicist Professor Klaus Lackner thinks he may have found a way of tackling our current excessive use of fossil fuels.

He has designed a synthetic tree, a construction that mimics the function of natural trees whereby leaves pull carbon dioxide (CO2) out of the air as it flows over them.

The CO2 removed from the atmosphere in this way, he believes, could be stored deep underground both safely and permanently.

But even though Professor Lackner only advocates the use of these artificial trees as a way of giving the world some time to come up with alternative, “carbon-neutral” energy sources, how effective would they be in offsetting greenhouse emissions?

“Just like a real tree, an artificial tree would have a structure to hold it up – the equivalent of a trunk, probably a pillar,” explains the professor. “You would find the equivalent of branches which hold up the leaves.”

Unlike in a real tree, he explains, where the leaves are spread out because they have to see sunshine for the purpose of photosynthesis, the leaves on an artificial tree could be packed much more tightly.

“That is one of the reasons why an artificial tree can collect much more CO2 than a natural tree,” he argues.

It was Professor Lackner’s teenage daughter Claire who gave him the inspiration to tackle CO2 in the atmosphere, when she was looking for a school science project.

Claire showed she could actually pull carbon dioxide out of the air by blowing it through a solution of sodium hydroxide.

Overnight, she had collected half of the CO2 from the air blown through the solution.

When CO2 comes into contact with sodium hydroxide, it is absorbed, producing a liquid solution of sodium carbonate.

It is that liquid solution that the professor believes could be piped away, and the time at which the CO2 could be recovered as a concentrated gas in preparation for its final storage.

Nature, of course, has its own way of storing carbon.

Once trees and other plants have absorbed CO2, the carbon is retained in their tissues.

His vision is to have thousands of artificial trees and estimates that every single one would remove 90,000 tonnes of carbon dioxide a year – the equivalent emissions of 20,000 cars.

But even if this is possible, could the CO2 collected be stored away forever?

The carbon dioxide gas would be injected into it, permeating the surrounding porous rock.

At this depth and low temperature, the carbon dioxide is denser than water, locking it in place.

“It cannot rise from there to the ocean floor,” says Professor Lackner, “so it puts it away literally for millions of years.”

It is going to take a great sea change in lifestyles to reduce carbon dioxide emissions to a manageable level.

The growing number of scientists and engineers proposing large-scale geo-engineering projects to combat these emissions say they are reluctant advocates.

Their hope is that humanity will look for and find other carbon-neutral energy sources soon, so that we do not need to resort to such dramatic and intrusive technological interventions. 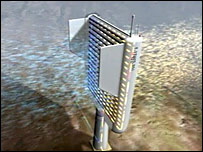 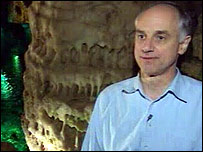 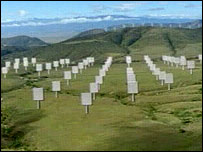 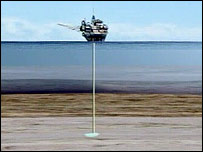