We received a requirement where based on one segment’s multiple occurance of an Idoc, we need to create multiple files as output (Based on occurance of a particular segment). Normally, in the receiver side we change occurances to 0..n to accommodate these kind of requirement. But, in this scenario, XSD used were standard XSD’s with occurance 1 and client didn’t want to change it in custom ways as receiving system is bound to receive one message/file at a time. Because of this situation we have to build 1 to n multimapping scenario based on multiple segments of incoming Idoc.

This is an IDOC to SOAP Asynchronous requirement in which multiple xml data will be posted to third party system by SOAP receiver Channel. Third party system has internal queue mechanism to handle each xml data seperately.

Below is the development done for this scenario.

Create Message mapping as per below screenshot. We have to give source and target message and then we have to change occurance of target message (0..unbounded)to get ready for multimapping.

In the target side of mapping, PI will add extra messages tags for multimapping like below.

In IDOC, VWERK field is part of repeating segment and depending upon that we will map target node as per below screenshot. Rest fields we can map one to one depending upon our requirement. 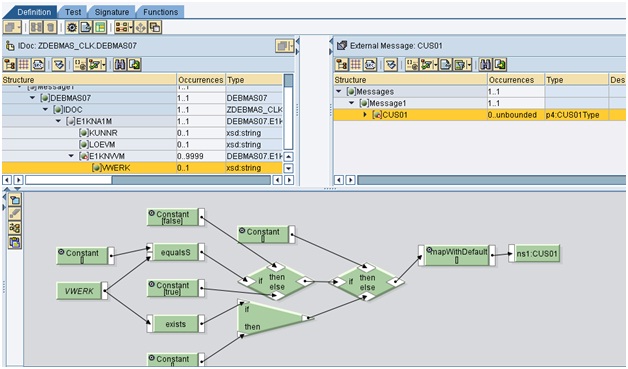 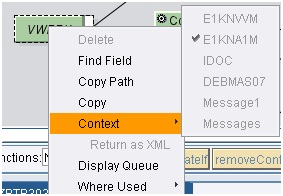 Now create Operations mapping and change target side occurance to 0..Unbounded for multimapping.

Above screenshot shows multiplicity of operations mapping fo this interface should be  0..Unbounded.

I followed your steps, but when i am trying to do mapping in target systems multiple nodes are shown for external OAGIS XSD.

Do i need to create different mapping for each node, if yes, then how do i integrate it in Opeartion Mapping and how can we do the configuration using these multiple nodes.

can you please give any solution or document for this..?

I am facing the same issue.Can anyone let me know how to move ahead

I was able to import the order.xsd into PI .however we get the option of selecting global elements and can only select one..So then how to go ahead with mapping and operation mapping.

And also in ID , will there be any different points to look .

there willbe idoc sender adaptor and File reciever adaptor which will generate and ftp .xml file

Hi Aashish, In JDBC receiver scenario i need to map multiple table names to table element in JDBC scenario how can i achieve this mapping. please see the attachment . Please suggest me . thank you for help

Is it possible to send messages to different target systems base on conditions?